Your Blue Jeans Are Polluting the Arctic 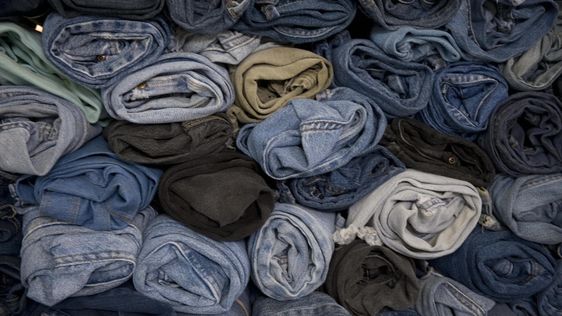 Turns out the Sisterhood of the Traveling Pants was really about pollution.Photo: Jim Watson/AFP (Getty Images)

Since quarantine began, I’ve donned nary a pair of jeans. Sweatpants? Hell yeah! Dresses? Glorified pajamas, I say. But blue jeans? To sit on the couch all day? Couldn’t be me. Well, it turns out that by leaving my jeans in the closet and not wearing and washing them, I may be preventing itsy bitsy denim fibers from entering far-off waterways.

In a new study published by the American Chemical Society on Wednesday, scientists considered blue jeans as a source of microfibers, or teeny tiny pieces of plastic which leech off clothes when they’re washed or worn. The fibers are so small that they can pass through sewage treatment plants and find their way into waterways, where they can endanger marine life.

The team of seven researchers were inspired to embark on the study when they were collecting microplastic samples from the Canadian Arctic archipelago and Great Lakes.

“Strangely, we all reported finding blue fibers in the samples,” Miriam Diamond, a professor of earth sciences at the University of Toronto who led the research, wrote in an email. “We wondered if these prevalent blue fibers could be from blue jeans (what else in our wardrobes have so many blue fibers?).”

Curious, the researchers took to the lab to develop a method to identify exactly what microfibers from indigo-dyed jeans look like. Using chemical and microscopic analyses, they identified exactly what these specific fibers look like and how to distinguish them from other clothing’s microfibers.

Armed with the knowledge of how to separate jeans’ microfibers from others, the researchers examined wastewater discharge before it was emptied into Lake Ontario. On average, they found 22 fibers in every liter of wastewater.

The authors also experimented with running jeans through the wash to confirm how all of these fibers are getting jarred loose and knocked into waterways. By experimenting with new, used, and distressed jeans, they found that a pair releases an average of 56,000 fibers when washed. For context, that’s roughly 10 times the number of fibers released when a fleece jacket gets laundered.

To see where all those teeny jeans bits end up, the authors looked at samples of sediments they collected from shallow suburban lakes near Toronto, the Great Lakes, and the Canadian Arctic Archipelago.

Bodies of water in each location, it turned out, had jeans fibers in them. In fact, denim accounted for more microfibers than any other material in the specific waterways the researchers checked out. Indigo-dyed denim represented 23% of microfibers they found in the Great Lakes, 12% of those found in the suburban lakes, and a whopping 20% of microfibers found in the Canadian Arctic Archipelago. Yes, there are a bunch of little pieces of our jeans in the Arctic.

A major concern regarding microfiber pollution is that they get into the marine food chain. Somehow, though, the authors’ limited findings don’t suggest that fish are eating these jeans fibers. The team caught rainbow smelt in the Great Lakes and looked at their digestive tracts. They found that 65% of them had microfibers in them—up to 63 fibers per fish. But strangely, even though nearby sediment had lots of denim fibers, only a single fiber found in a single fish was made of indigo-dyed denim.

The researchers don’t know why this is. Maybe jeans are just less tasty than polyester clothes or bits of wooly sweaters. But whatever the reason, this is not reason to believe that all of this denim microfiber pollution isn’t a problem. Other kinds of marine life may be eating the tiny fibers, and even if they’re not, there’s other ways that teeny bits of stuff can be harmful to animals. One study, for instance, found that exposure to microplastic can disrupt hermit crabs’ cognitive functioning, making it harder for them to find shells to live in. The researchers are now examining the effects denim microfiber could have on marine ecosystems, as well as whether or not they are acting as a vector for chemicals, carrying toxic pollution into the sea.

Of course, jeans aren’t the only clothing that emit microfibers. The researchers also found tons of fibers from synthetic fabrics like acrylic, nylon, and polyester, and fibers from other unidentified fabrics, too. It seems pretty much all clothing comes with a microfiber footprint. There’s a lot more to learn about what that footprint means for the planet, but the mere knowledge that our blue jeans are ending up as far away as the remote Arctic is a reminder of the unintended consequences of even our most banal actions.