His recycled wool-and-fleece mittens delighted the world on Inauguration Day. The day looked sunny but chilly in Washington, D.C., as the presidential inauguration took place, but one thing's for sure – Bernie Sanders' hands were toasty warm. The Vermont senator was seen sporting a pair of large mittens made from recycled wool that have caught the world's attention.

They are so incongruously ordinary, the kind of mittens anyone would want for shoveling a snowy driveway, doing the school run in midwinter, or hauling recycling to the curb, that they stood out amid the sea of dark formal wear that the rest of the audience was wearing. There's a good chance they struck envy into the hearts of many who would much rather have their hands encased in cozy wool and fleece than cold leather.

These same mittens were spotted a year ago when Sanders was still campaigning for the Democratic presidential nomination. (Treehugger is pleased to see Sanders is a proud outfit repeater.) The Cut reports that they were a gift from schoolteacher Jen Ellis, whose daughter attended a daycare run by Sanders' daughter-in-law. Ellis gave the mittens to Sanders with a note that said, "I believe in you, I've always believed in you, and I hope you run again." When he did run again and started wearing the mittens in public, Ellis was delighted. She sent ten additional pairs of mittens to be distributed along the campaign trail.

After their first appearance, the mittens garnered so much attention that they got their own Twitter page, known as @BerniesMittens. Now, thanks to their re-emergence on Inauguration Day, that Twitter page is buzzing with excitement once again. "Bernie is trending during inauguration bc he's both a fashion and policy icon," one person tweeted. Another posted a meme that reads, "These mittens and healthcare should be a right, not a privilege!" I love The Cut's conclusion about Bernie's sartorial signaling:

"What does Bernie want to say with these mittens and his overall look? That he is cold. That he supports a Green New Deal. That he doesn’t mind repeating an outfit. Mostly it is a reminder that we could have had, in these troubled times, a Ross Dress for Less president for the people." 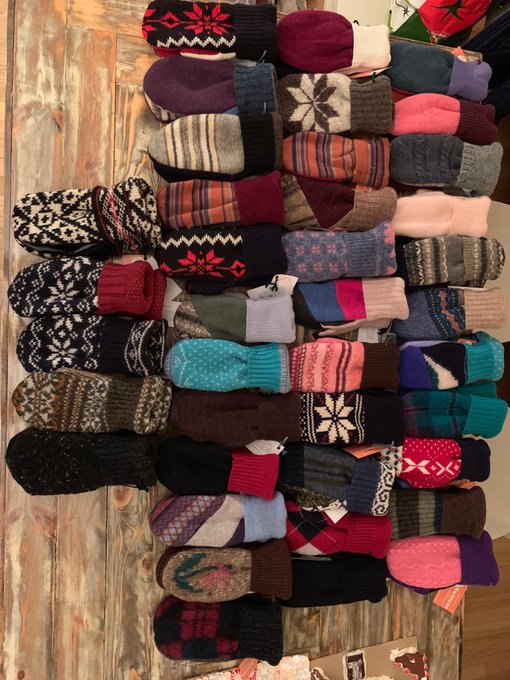 For those wondering how they can get their own hands into a pair of these, Jen Ellis says she still makes them and will accept orders over email. She has posted her contact info on Twitter. If she's inundated (which seems likely), you could look on Etsy. Woolies by Charlie, Barefoot Girl Design, Baabaazuzu, and Collection Gaia all have great options for upcycled mittens.