Society faces three options in addressing climate threats ... one of them unacceptable: do nothing and suffer consequences of that inaction. 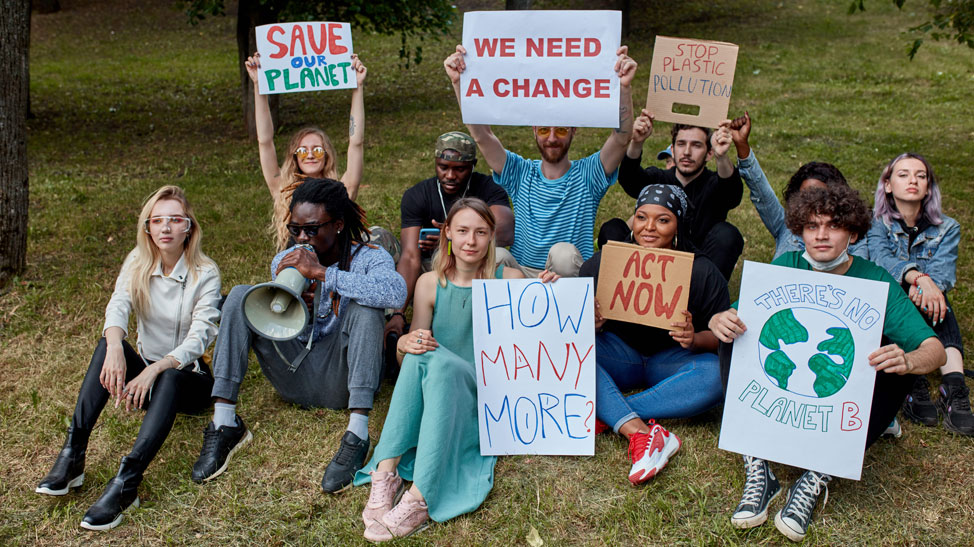 Our essays in this series have presented compelling scientific evidence about the warming of the planet, reviewed the evidence that human activity is its principal cause, and discussed the resulting economic and environmental damages.

Now comes the question of what we are going to do about it. The options are clear:

– Nations can work toward eliminating greenhouse gas emissions and reducing the scale of future warming.
– Governments and private actors can, and will, invest in measures to protect home and livelihood from effects of changes that cannot be prevented.
– Or human societies and natural ecosystems will suffer the severe harms of inaction.

The more they (really we) do now and in the near future, the smaller will be the residual damages imposed on ourselves, our children, and our grandchildren. The choice is ours.

The suffering is already here, of course. In some places, it is almost impossible to bear despite growing investments in adaptation. So what is missing? A commitment to emissions reductions appropriate to the special nature of the climate change threat. Fortunately, with a smart choice of policy measures, the emissions control challenge can still be met at a tolerable economic cost.

And what is the special nature of the threat? Climate change is unlike other environmental insults, such as polluted urban air. Risks associated with most pollutants depend on current emissions whose corrosive properties and damages are generally reversible. Not so for our influence on the climate. Human emissions contribute to stocks of heat-trapping gases in the atmosphere, some with very long residence times there. Carbon dioxide (CO2) is the most important of these gases, and natural processes cannot reduce its concentration resulting from human emissions except over centuries to millennia.

Over the past several thousand years, Earth’s temperature has varied within a narrow range of less than 1°C, about 1.6° F – stable conditions under which human society has thrived.

Spurred by human emissions of greenhouse gases, however, the planet’s temperature has increased by 1.1°C in a flash, a bit over one century. The current economic and environmental damages are the result of just the ongoing warming of the planet so far; that warming is spurred by greenhouse emissions since the industrial revolution, and it cannot be reversed on human time-scales. And each year of continued emissions commits Earth to ever-higher temperatures.

The need for an urgent response is made clear by even a cursory look at what is a stake if this human influence on the climate is allowed to continue unabated. Figure 1 displays the latest version of the “burning embers” diagram, picturing reasons for concern with climate warming, as introduced in our October 2nd essay. As displayed in the first four columns, warming of 2°C would be more damaging than the current 1.1°C increase. Further increases would be worse, and the still higher increases potentially calamitous.

More troubling, even the damages we know a good deal about, and can expect at these higher temperatures, do not tell the whole story. There are risks, still poorly understood, of so-called tipping points, suggested by the right-most column in the figure, in which case the Earth might undergo a radical environmental shift. Examples include an unstoppable melting of Greenland and the Antarctic ice sheets that will yield many meters of sea-level rise, or an acceleration in the outgassing of CO2 and methane (an especially potent greenhouse gas) from tundra ecosystems that would rapidly increase the pace of warming.

Continued greenhouse emissions will push these risks higher and higher, and managing them demands a prompt, vigorous emissions control effort. In framing a response there is no simple temperature goal or emissions target that will determine success or failure of the effort. A focus on such a mistaken, do-or-die, achievement, if some particular target appears unlikely to be met, would risk causing despair, and a shift elsewhere, of public energies. Managing the climate threat will require a tenacious, long-term effort to limit greenhouse emissions whatever the level of achievement at any time along the way.

Of course, as economists are wont to say, there is no free lunch. There will be costs to the economy in the transition away from fossil fuels and in the cutting of other greenhouse emissions. Fortunately, studies of long-term climate policy routinely find that, with effective international cooperation, deep reductions in global emissions could be achieved over time with only a few percent loss in economic activity. And these estimates don’t account for the costs avoided by the lowering of future climate change.

Moreover, there is continuing improvement in technology and policy design. For example, the costs of low-carbon technologies like wind and solar power continue to fall, and economically efficient emissions pricing initiatives are being ever more widely applied to wean economies off fossil fuels. One indication of growing confidence that costs are manageable is that the European Union and China talk of reducing their emissions to zero by around mid-century.

Whatever the overall economic costs of cutting warming emissions may turn out to be, the greatest burdens will fall on a narrow set of businesses, fuel producing regions, and employment groups. In a number of U.S. states and regions, the prerequisites for aggressive emissions reduction likely include programs to ameliorate these short-term impacts, perhaps including extended unemployment support and training for workers whose jobs disappear permanently,

As the second largest emitter of greenhouse gases and world power, the U.S. and its response to the climate challenge are crucial. Evaluation of U.S. performance to date depends on where you look. On the one hand, many individuals, non-profit organizations and business firms are actively pursuing emissions-reducing investments and changes in operating practices. Also, states and cities have adopted aggressive emission targets and are implementing policies and programs to meet them.

On the other hand, the achievements of these earnest efforts are limited by a lack of supportive, coordinated emissions policies from the U.S. federal government. Still more troubling, one side-effect of this domestic inaction is a failure of national leadership within the global climate effort, a topic for our next essay.

Our message, then, is clear. With intelligent actions, strenuous emissions control policies will impose manageable costs on the overall economy, though the energy transition will be more painful for some business sectors and regions. Not taking prompt action would, however, be very expensive. Further delay raises the risk of ever-increasing, perhaps catastrophic, environmental and economic damages.

Henry Jacoby is the William F. Pounds Professor of Management, Emeritus, in the MIT Sloan School of Management and former co-director of the MIT Joint Program on the Science and Policy of Global Change, which is focused on the integration of the natural and social sciences and policy analysis in application to the threat of global climate.

Gary Yohe is the Huffington Foundation Professor of Economics and Environmental Studies, Emeritus, at Wesleyan University in Connecticut. He served as convening lead author for multiple chapters and the Synthesis Report for the IPCC from 1990 through 2014 and was vice-chair of the Third U.S. National Climate Assessment.

Richard Richels directed climate change research at the Electric Power Research Institute (EPRI). He served as lead author for multiple chapters of the IPCC in the areas of mitigation, impacts and adaptation from 1992 through 2014. He also served on the National Assessment Synthesis Team for the first U.S. National Climate Assessment.

https://yaleclimateconnections.org/2020/10/vigorous-action-needed-and-soon-on-climate-change/?ct=t(EMAIL_CAMPAIGN_WEEKLY_101220)
Use left/right arrows to navigate the slideshow or swipe left/right if using a mobile device