Up to a Third of Bangladesh Is Underwater 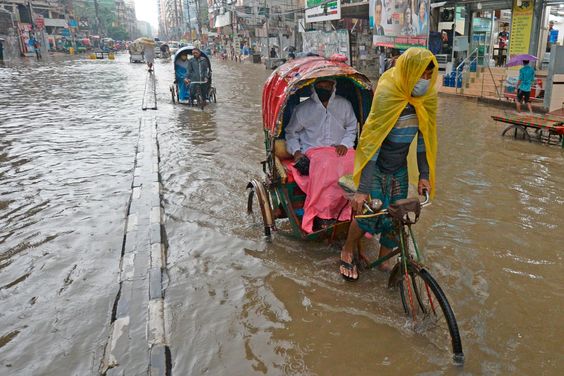 Rickshaw pullers make their way through a water-logged street after a heavy downpour in Dhaka on June 21, 2020.Photo: Munir Uz Zaman (Getty Images)

This monsoon season has been devastating East and South Asia since early June, and the rains are showing no signs of stopping—throughout the region, they are expected to continue into mid-August. Bangladesh has been especially hard it: The floods have left between 24% and 37% of the country underwater, the New York Times reports. The consequences have been horrific, with 4.7 million people across the country displaced, 984,819 houses inundated, and 129 people killed, according to government data.

In China, at least 158 people have died and millions have been forced to evacuate. The heavy rains have killed some 550 people through South Asia, too. In India, the rains are creating floods and landslides. The state of Bihar, for instance, has seen over 5 million people displaced and a death toll of 13, while farther east, in the state of Assam, 107 have died. Some 130 people in Nepal have died, too. In Afghanistan, floods have killed at least 16 people, including 15 children under the age of six, and destroyed dozens of homes. 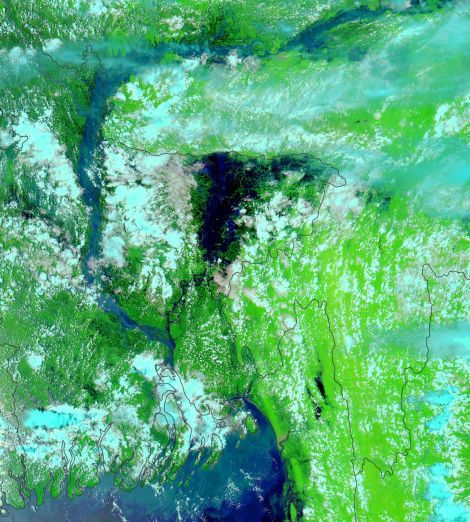 To make matters worse, rains throughout the region are also interfering with covid-19 response plans, particularly in vulnerable communities such as those living in refugee camps, where people are most threatened by both crises.

“Bangladesh is already facing multiple crises with covid-19 and its economic fallout, making these floods even more deadly,” Vincent Koch, humanitarian director of Oxfam in Bangladesh, said in a statement last month.

Downpours during monsoon season are nothing new. Rains beat down across much of South and East Asia every year from late spring through early fall, when the region sees temperatures and moisture levels increase and a seasonal change in the direction of prevailing winds. The wet period has historically provided an important relief from the relentless dry heat of summer, cooling the air and quenching thirsty crops and wildlife.

But in recent years, amid the climate crisis, monsoon season has gotten far worse. Last year was the first monsoon season in recorded history to not begin its withdrawal by October 1, and the severity and length of this year’s floods are also remarkable. The United Nations has estimated that this year’s flooding could be the most prolonged since 1988.

“This is a one in 20-year flood event that we are having now for the fifth time in the last 20 years,” Saleemul Huq, director of the International Centre for Climate Change and Development in Bangladesh, told The Independent.

Without urgent action to draw down carbon emissions and curb the climate crisis, more severe monsoon seasons are surely on the horizon. Along the Bangladeshi portion of the Brahmaputra River, for instance, water has stayed at a dangerously high level for over 30 consecutive days, which is the longest streak of this kind in the region in more than 20 years. And if global temperatures rise to 2 degrees Celsius above pre-industrial levels, one study from climate experts at the Bangladesh University of Engineering found, then flooding along the river will get even worse, with floods that currently only occur once a century occurring 24 times per century.