UN deputy chief warns of a ‘hurricane of humanitarian crises’

UN Deputy Secretary-General, Amina Mohammed, has warned of a “bloody surge” impacting humanitarian crises around the world, with civilians in conflict zones paying the highest price. 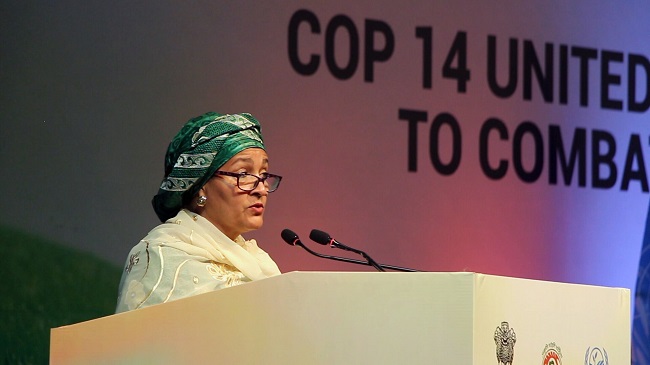 Speaking on behalf of the UN chief, the Deputy Secretary-General told the Security Council on Friday, July 16, 2021 at the UN headquarters in New York that humanitarian needs had never been greater.

She also spoke of “brutal attacks” in Afghanistan, Syria and Yemen, where 20 million people are living “face-to-face” with hunger.

“We are in uncharted waters,” she said, with the “sheer scale of humanitarian needs” never greater.

In 2021, the UN and its partners are seeking to assist 160 million people – its highest number ever.

T Mohammed as said that the “hurricane of humanitarian crises” is compounded by a “relentless wave of attacks” on humanitarian and medical workers, and the imposition of even narrower constraints on the humanitarian space.

“The Secretary-General urges this Council to take strong and immediate action to support its numerous resolutions on the protection of civilians, humanitarian and healthcare workers and the humanitarian space,” she told ministers and ambassadors.

Shootings, bodily and sexual assault, kidnappings and other attacks affecting humanitarian organisations, have increased tenfold since 2001, according to Mohammed.

“In the five years since this Council’s landmark resolution calling for an end to impunity for attacks on healthcare systems, workers and patients have suffered thousands of attacks,” she said.

She noted that it was becoming ever more difficult to provide vital humanitarian aid to people in need, as some authorities have imposed restrictions on the movements of humanitarian staff and supplies, long visa and customs procedures and delays at checkpoints, in addition to high taxes and fees on humanitarian supplies.

While every country needs to act against terrorism, each also has a responsibility to make sure its counter-terrorism efforts do not undermine humanitarian operations, the UN deputy chief said.

As governments create systems around humanitarian aid delivery, she reiterated that “it is essential” that they support, rather than block aid because the best way to protect the humanitarian space was by ending violence and conflict.

Meanwhile, the Secretary-General has called for a global ceasefire to focus on the common enemy: the COVID-19 pandemic and on Thursday, he issued another call for silencing the guns in the run up to the Olympic and Paralympic Games in Tokyo.

“People and nations can build on this temporary respite to establish lasting ceasefires and find paths towards sustainable peace,” he said.

While the UN engages in difficult negotiations to create lasting ceasefires and build sustainable peace, the delivery of life-saving humanitarian aid must continue and that requires the necessary humanitarian space.

Council have a responsibility to do everything in their power to end attacks on humanitarians and assets, while seek accountability for serious violations, Mohammed stressed.