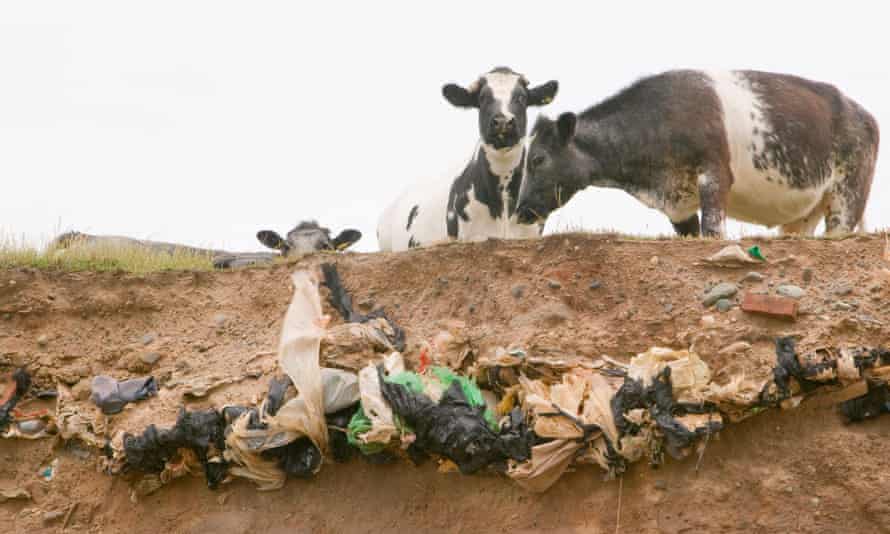 Hundreds of landfills around England and Wales containing hazardous waste are located beneath green spaces, schools and housing, analysis of official data has found.

Experts say authorities are “setting themselves up for a large sequence of nasty surprises” if the toxic substances were to escape, with council funding shortfalls meaning many sites are not being dealt with appropriately. The contents of hundreds of sites remain unknown even to the Environment Agency (EA).

According to agency data mapped by the Ends Report, there are more than 21,000 old landfills scattered across England and Wales. Of these, 1,287 are categorised as containing hazardous waste, which could pose a health risk to people and the environment it escapes into the surrounding air, water, soil and vegetation.

Some 7,265 of the old landfills harbour industrial waste, with many containing “industrial liquid sludge”. At 413 further sites the waste has been categorised by the EA as unknown.

Landfills whose contents are recorded as unknown tend to be older sites, explaining the lack of information. One environmental professional who deals with remediating sites for development told the Ends Report and the Guardian that landfills from the 1950s and 60s were “a complete mess” and that “you can find anything in there”.

The EA said its record of the former landfill locations was “not detailed” and had been compiled as part of an environment department project in the 1990s. Sites are added to the data when they close but cleaned-up sites are not removed as councils are legally responsible for them, according to the agency.

Given the age of the data, it is likely that a number of the landfills have been removed or contained where the sites have been redeveloped, but the kinds of techniques used will depend on when the developments took place, as rules on remediation and acceptable levels of certain chemicals have changed over time.

Experts say the definition of hazardous waste has also changed, meaning some sites categorised as not containing toxic waste may contain substances now considered to be hazardous.

Ends Report has mapped the sites, revealing that 35% of the hazardous sites – 449 – lie under green spaces. A further 21% lie beneath farmland, 15% are below industrial sites, 10% are under parkland, 9% under housing and 4%under commercial sites containing shops and restaurants – assuming none were removed on development.

About 746 toxic dumps are located within 500 metres of water bodies, 13 are beneath golf courses and four below school grounds. Another four are situated under racing tracks, and three lie below cricket pitches.

Of the 413 landfills where the contents are unknown to the Environment Agency, six lie beneath schools and 10 beneath playing fields, 75 are under housing and 26 under parkland.

Dr Paul Johnston, from Greenpeace’s research laboratory at the University of Exeter, said old tips contained “all sorts of horrors and rubbish … it’s another one of these problems that is waiting to creep up on us and bite us in a very big way.”

Unlike modern landfills, older ones tend not to have been lined before the waste was deposited, meaning the chemicals within can leach out, potentially contaminating rivers, groundwater, soils, plants and harming wildlife. Even modern lined landfills with leachate management systems will eventually leak, according to some studies.

Old dumps can contain substances now banned or restricted such as asbestos, polychlorinated biphenyls (PCBs), PFOA and PFOS, all of which are extremely toxic to human health and the environment.

“There’s a huge variety of problems out there, ranging from asbestos to PCBs to radioactive material, to more recent chemicals like PFOA and pesticide waste that has been dumped in a large number of locations,” said Johnston. “Liquid sludge could be anything from oily sludge to cyanide waste from metal plating operations.”

In the US, old landfills containing toxic substances have made local communities sick, leading to class-action lawsuits and multimillion-dollar payouts. In the UK, sick cattle and deformed calves have been linked to a landfill that leaked chemicals including Agent Orange derivatives, vinyl chlorides, dioxins and PCBs into groundwater and soils in south Wales.

The risks associated with old sites are exacerbated by their position: 1,364 old dumps are in zones at risk of tidal flooding, many near protected conservation areas.

A recent EA assessment revealed that every English river failed to meet legal health standards as a result of what it called the “ubiquitous” presence of chemicals such as PFOS, PFOA and brominated flame retardants. Old unlined landfills are not the only source of these substances but it is likely they make a contribution.

Part of the problem lies in the lack of funds for cleaning up old toxic sites. It is the responsibility of local authorities to identify them and organise the cleanup, and to bring the worst cases to the attention of the Environment Agency or Natural Resources Wales, neither of which are funded to undertake any investigative work in this area. Councils do not have adequate money, leaving the sites in limbo unless a developer chooses to buy, remediate and develop them.
But developers “don’t tend to pick on landfills to remediate,” said Johnston. “They tend to pick on gasworks or old railway shunting yards where the contamination is relatively easy to deal with” and they have a better idea what they will encounter.

David Renard, the environment spokesperson for the Local Government Association, said councils had a “responsibility to monitor and manage historic landfills in their area where the operator was either the local authority or is unknown”, but said councils often lacked the necessary funds. He urged the government to provide more support.

Johnston said this was the “story of environmental surveillance generally, as the EA has retracted so the funding base for any sort of investigation or surveillance work has been pulled back. They’re setting themselves up for a large sequence of nasty surprises at the end of the day.”

• This article was amended on 16 January 2021. The report covers England and Wales, not the UK as stated in the headline and text of an earlier version.