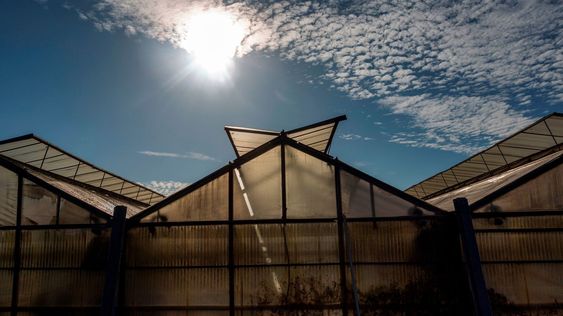 Here are some cannabis greenhouses near Santa Barbara, California on August 6, 2019. Imagine a future where all your weed is grown in tandem with solar energy generation.Photo: David McNew (Getty Images)

In a future world, leafy vegetables may not be grown in rows of crops under the sun. Instead, they may be grown indoors beneath tinted semi-transparent solar panels that will allow farmers to grow food and produce energy. That’s the future imagined in a recent study that shows how the use of this technology can benefit farmers and the climate.

Semi-transparent solar panels are an emerging area of technology. At least one company offers them as a canopy to put over outdoor spaces. But the new study, published in the journal Advanced Energy Materials earlier this month, explores whether tinted solar panels could work on farms as well, a process part of a larger area of research dubbed agrivoltaics.

The authors assessed how growing basil and spinach under the panels works, and the results are encouraging. For the experiment, the team of scientists grew the plants in both a clear glass building and underneath tinted semi-transparent solar panels and compared the results. The panels can filter out the different wavelengths of light depending on what color they are. The researchers chose orange-tinted panels to absorb mostly blue and green light while allowing red light to shine through to the plants, which they prefer.

“The reason plants are green is because they reflect back the green [light] and they use all of the red,” said author Elinor Thompson, a senior lecturer of science at the University of Greenwich. “These transparent solar panels use the wavelength of light that the plants don’t want, so they’re kind of orangey-red solar panels. That’s really cool because then plants get what they want, and then you get the rest of the energy for electricity.”

With less light coming through overall, the crops did see morphological changes. That includes reduced biomass, including a 15% and 26% reduction in the amount of leaves (i.e. the parts we eat) the basil and spinach produced respectively. That has the potential to cut into farmer’s profits. But when factoring in the power generated by the panels that could be sold back onto the grid or used to offset energy use elsewhere, the crops resulted in a financial gain of up to 2.5% for basil and a whopping 35% for spinach.

This technology is still pretty new, but the interest has grown in recent years, Thompson said. With the urgency around the climate crisis growing, engineers are trying to get creative about future land use. Instead of a future where energy and crops need to compete for space, these solar panels offer a scenario where they can share space. That doesn’t mean, though, that the technology is perfect or that it doesn’t have limitations. With the spinach and basil, the roots saw the greatest reduction in size compared to other parts of the plants. That could mean this growing and power generating method wouldn’t be so great for root vegetables, such as potatoes and carrots.

It’s clear, though, that the agriculture sector needs some rethinking. Growing food is responsible for almost 10% of U.S. greenhouse gas emissions. Tinted solar panels won’t fix that completely; farmers still need to use less fertilizer and implement practices that emit less carbon pollution—or even absorb it out of the atmosphere. But the agrivoltaics model is comes with an added benefit: clean energy. The world needs a lot more of that.