These are the companies that produce the most plastic

Plastic pollution is one of the most severe environmental problems in the world, and multinational companies are largely to blame, according to a new report. Coca-Cola, PepsiCo, and Nestlé named the world’s top plastic polluters for the third year in a row, facing increasing criticism for their lack of action. 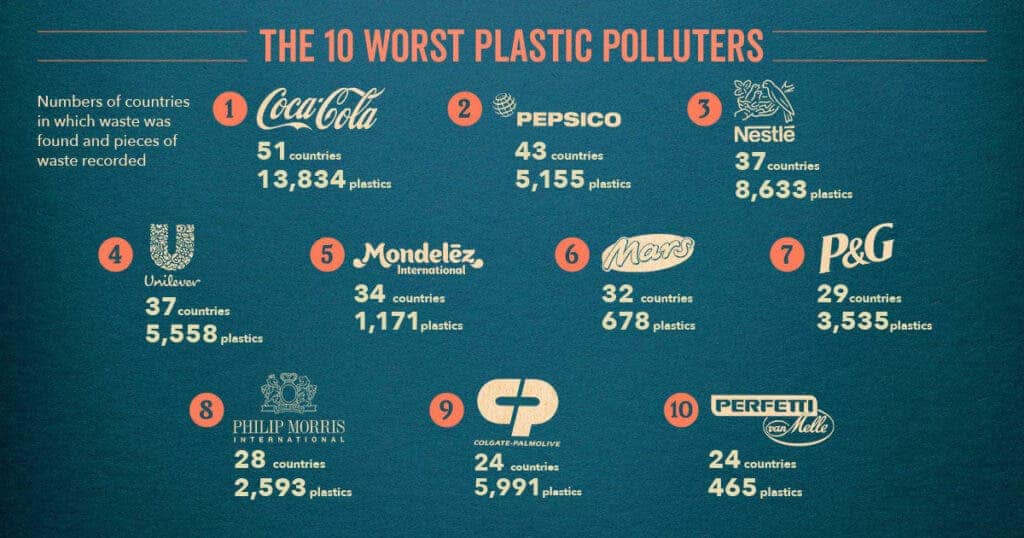 The Break Free From Plastic’s brand audit, an annual citizen action initiative that involves counting the brands on plastic waste found in communities across the globe, collected 346,494 pieces of plastic from 55 countries, quantifying where the plastic comes from. The top waste polluting companies were the same as in previous years.

“It’s not surprising to see the same big brands on the podium as the world’s top plastic polluters for three years in a row. These companies claim to be addressing the plastic crisis yet they continue to invest in false solutions while teaming up with oil companies to produce even more plastic,” said Abigail Aguilar, campaigner.

A total of 13,834 branded Coca-Cola plastics were recorded in 51 countries, more plastic than the next two top global polluters combined. These results amount to a significant increase, as the report recorded 2,102 more Coca-Cola plastic items in 14 more countries in 2020 than in last year’s global brand audit.

Coca-Cola was harshly questioned by environmental campaigners earlier this year when it announced it would not abandon plastic bottles claiming they were popular with customers. The company produces about three million tons of plastic packaging a year, the equivalent of 200,000 bottles a minute.

PepsiCo branding was found on 5,155 in 43 countries and Nestlé branding on 8,633 in 37 countries, the second and third most significant polluters, the report showed. This represents an increase in the number of plastic products registered last year and from the number of countries in which they were reported.