Thanks to the coal industry’s rapid decline, U.S. greenhouse gas emissions likely dropped slightly last year. But don’t get too used to that trend, because the oil and gas industry is poised to more than offset that reduction. By 2025, oil and gas companies have plans to expand enough to release as much new greenhouse gas pollution as 50 new coal-fired power plants.

According to state and federal records, oil, gas, and petrochemical industries are on track to build or expand 157 projects—such as refineries, oil and gas drilling sites, and plastics plants—in the next five years. New research from the Environmental Integrity Project shows that the projects could emit 227 million tons of additional greenhouse gas pollution by the end of 2025. That means the U.S. could produce 30 percent more greenhouse gas pollution by 2025 than it did in 2018.

“This analysis shows that we’re heading in the wrong direction and really need to slow emissions growth from the oil, gas, and petrochemical industries,” Courtney Bernhardt, Research Director at the Environmental Integrity Project, said in a statement. 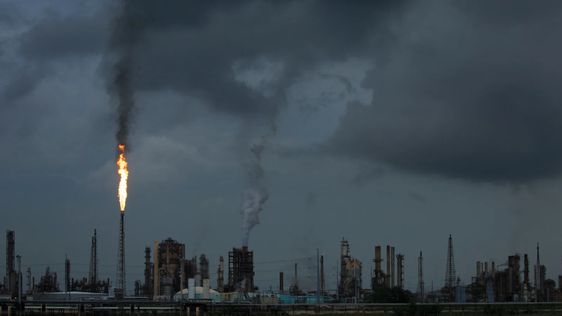 In addition to worsening the climate crisis, the 157 new oil and gas projects will be a public health disaster. Their permit documents show they could emit hundreds of thousands of tons of toxins that contribute to air and water pollution. The report shows that every year, the facilities could produce “up to 119,000 tons of volatile organic compounds, which are a component of smog; 11,100 tons of fine particles that contribute to asthma and heart attacks; 8,800 tons of sulfur dioxide, which damages the lungs; and 47,200 tons of nitrogen oxides, which feed fish killing ‘dead zones’ in waterways.” In other words, oil and gas companies will profit from their planned expansions at the expense of literally everyone on the planet, especially the communities where the infrastructure is built.

About half of the future projects are planned for the Gulf Coast, mainly in Texas and Louisiana. “The people who will bear the brunt of this, a lot of them are in low-income communities,” Bernhardt told Earther.

She said the future project with the highest potential carbon footprint, for instance, is a petrochemical complex planned by Formosa Plastics planned for St. James Parish in Louisiana, which could emit 13.6 million tons of greenhouse gases per year. The communities in the area, known as Cancer Alley due to the high incidence of cancer and number of oil, gas, and petrochemical facilities there, already bears a disproportionate burden of suffering and are largely African American.

“One town in that parish already has the highest cancer risk in the country, and there are other expansions planned for that area, too,” she said. “Public health is on the line, and the climate is, too.”

The best solution would be halt the oil and gas industry’s expansion completely, but Bernhardt said that doesn’t look likely. That’s why the Environmental Integrity Project is calling for state and federal environmental control agencies to do more emissions monitoring and reporting and ensuring companies adhere to stricter standards.

“The industries responsible for driving fossil fuel extraction and production need to be held more fully accountable for their actions and the consequences of those actions,” Bernhardt said.

The group also calls for more funding for the Environmental Protection Agency, which has seen a 16 percent budget reduction in the past decade, and state environmental agencies, which have also seen dramatic budget and staffing cuts. Under the Trump administration—which has proposed even more draconian cuts to the agency and slowed enforcement and remediation work to a crawl—that seems unlikely, though.

These planned expansions couldn’t be coming at a worse time given what we know about the climate crisis. Overall U.S. emissions last year dipped just 2 percent, which is hardly something to celebrate. Meanwhile, emissions from the industry were already steadily rising, oil and gas companies’ greenhouse gas emissions increased by 8 percent from 2016 to 2018. And air pollution has also risen over that time for the first time in decades.