The meat industry is freaking out over plant-based meat. They should

When the meat industry suffers, the environment wins -- and so does our health.

Meat industry lobby groups are making aggressive moves against plant-based alternatives. But the consumers are catching on. 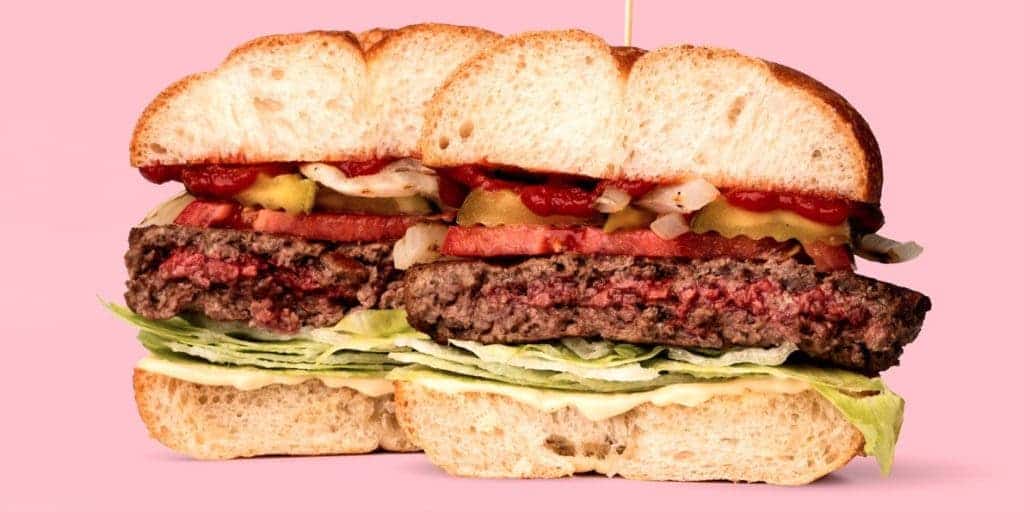 Plant-based meat alternatives, such as the one depicted above, have become increasingly popular. Image credits: Impossible Foods.

Consumers have reacted to this. A meatless burger may have sounded extreme a few years ago, but it’s not becoming more and more common — even among non-vegetarians.

When the Impossible burger first hit the shelves, it triggered massive queues and basically vanished off the shelves. Now, it’s being sold in Burger King, and the difference between the plant-based and the original Whopper is hard to tell. Beyond Meat, another plant-based alternative is now found in Dunkin Donuts all around the US, becoming readily available to the general market. Other companies, both in the US and outside, are also starting to take wing.

The reason why this is more than just a market scuffle is that meat consumption is a major contributor to environmental damage, from emissions and water consumption to land clearance and deforestation.

Reducing meat consumption is one of the best things you can do to reduce your environmental impact. Livestock farming has a vast environmental footprint, contributing to 18% of our total greenhouse gas emissions. Calorie per calorie, replacing the meat with equally nutritious plants would reduce emissions by more than 90%, while also reducing biodiversity degradation. Producing one kilogram of beef (2.2 lbs) requires 25 kilograms of grain to feed the animal, and uses up roughly 15,000 litres of water. Meanwhile, pork is a little less resource-intensive and chicken even less still, but they are still much worse than non-meat alternatives. In other words, this isn’t just a matter of ethics and animal welfare — it’s a practical environmental problem, with far-reaching effects.

This perspective has helped shift the conversation around meat and plant alternatives. The main argument against meat used to be ethical — we’re killing animals when we could simply not kill them. But now, the discussion has shifted, and sustainability has moved to the forefront.

”Plant-based alternatives have absolutely gone mainstream and are gaining much more acceptance among consumers,” said Lizzy Freier, managing editor at Technomic, a data and analytics provider for the food-service industry.

“As people become more familiar with it, it’s now being integrated as something that’s just as tasty as traditional meat and something that’s sustainable. So I think the focus of late has been more on taste and sustainability and less on health.”

Even when people don’t see plant-based as a replacement for meat, they sometimes see them as a complement for it. Although meat consumption is still on the rise globally, a few countries (especially in Europe) are starting to eat less meat; and without alternatives, meat consumption would have likely increased even more.

Cases of plant-based proteins shipped to commercial restaurants rose last year by more than 20 percent, while regular meat grew by only 2%.

Over 30% of all Americans consider themselves flexitarians, attempting to reduce meat consumption, and more than half of all people say they would like to become vegan, if it weren’t for the inconvenience. Plant-based meat is now mainstream: it’s tasty, and comes without a side of guilt. But the meat industry hasn’t been idle.

The meat industry strikes back

Meat is a trillion-dollar industry, important and prevalent in every corner of the world. Meat lobbying and advocacy groups have powerful voices that often make themselves heard at a legislative and regulatory level. In the US, the meat industry was described as having a particularly “cozy” relationship with the government.

This is not a new thing. In 1995, when the USDA wanted to implement new food-safety regulations following an E. coli outbreak that made 700 people sick, the meat industry reacted by delaying the regulations as much as possible. They did this with the help of James Walsh, an upstate New York Republican who received over $65,000 from agriculture industry interests — especially the meat industry — and this is just the tip of the iceberg when it comes to the meat lobby.

In 2014, the meat industry spent $10.8 million in contributions to political campaigns, and another $6.9 million directly on lobbying the federal government. They’ve also made great efforts to ensure that meat continues to be featured prominently in dietary guidelines, and these efforts have been well-rewarded.

They’ve also made repeated attacks on the scientific methodology of studies, the majority of which recommended a reduction in red meat consumption. Nina Teicholz, a former journalist turned meat-advocate argued against the idea that saturated fat is unhealthy, claiming that the science on this issue is inaccurate. Teicholz penned (and presumably paid for) op-eds in the New York Times and Wall Street Journal about why Americans need more meat, dairy, and eggs — articles for which she claims to have not received any external money. She also published a feature report in the British Medical Journal (BMJ) in 2015, in which she argued the scientific approach behind that year’s USDA/HHS advisory dietary report is not accurate. Teicholz’ claims were harshly criticized by over 200 scientists, forcing the BMJ to issue two corrections.

Recently, the Center for Consumer Freedom, a nonprofit advocacy group on behalf of the fast food and meat industries has launched a scathing “informational” campaign targeting plant-based meats. The ads were on TV, online, and in the print (in newspapers such as New York Times or the LA times).

The ads portrayed plant-based meat as an unhealthy, fake alternative. Real meat is apparently happy, it only has pork, salt, and spices — whereas “fake” meat contains a bunch of chemicals you can’t even pronounce.

The intention is clear: demonize fake meats, stick with real meat. The ad starts from a kernel of truth — burgers from Beyond Meator Impossible Foods are not really that healthy, but that’s especially when you compare them with unprocessed foods. While these ‘fake meats’ are plant-based, their health benefits are stunted by processing, that much is true. But when you compare them to meat, we get a different story. As showcased by a Harvard comparison, even lean meat is comparable or slightly worse than plant-based alternatives, although a simple black bean burger is much healthier.

Nutritionally speaking, one of the big problems associated with meat (especially red meat) is its high saturated fat and cholesterol level, which puts consumers at an increased risk of heart disease and stroke. Research has also linked eating red meat to a higher risk for obesity. But this isn’t really a battle based on nutritional facts — it’s a battle based on perception. Meat alternatives have the moral high ground, but many find proponents of such diets annoying. Simply put, many find vegetarians and vegans annoying, and this dislike also spills onto vegetarian products.

This is also leveraged in lobby and PR attempts. This is apparent on the About page of the group that published the above-mentioned ads:

“We believe that only you know what’s best for you. When activists try to force you to live according to their vision of society, we don’t take it lying down.”

Here’s the thing: without a doubt, some people are exaggerating the benefits of plant-based diets (in small amounts, meat — especially unprocessed, non-red meat can be part of a healthy diet). Without a doubt, some companies or groups that claim to be ethical or responsible aren’t (and PETA is a great example). But eating a diet rich in plants and low in meat is responsible and ethical. It is scientifically proven.

More than 9 out of 10 Americans still eat meat, and the US is the country with the largest per capita meat consumption in the world. But things are changing in the US, and they’re changing even faster in other parts of the world.

What was once a fringe idea (consuming meat alternatives and reducing meat consumption) has now become mainstream. If current trends continue, the US and most European countries have already reached “peak meat”, and The roles have shifted somewhat and the meat industry is often the target of ridicule.

As The Atlantic‘s Derek Thompson puts it, factory farming may be the epitome of capitalist excess, an inferno of needless suffering and environmental degradation for the pursuit of profit. Plant-based companies, too, are interested in profit — but the means through which they obtain their profits involve much less suffering and come at a much lower environmental cost. The LA Times editorial board put it even more bluntly: The beef industry is freaking out over plant-based meat? Too bad.

Ultimately, the main argument against meat is based on animal welfare, ethics, resources, climate change, pollution, public health, and deforestation. The argument against plant-based foods is, for the most part, based on the fact that meat tastes good and is convenient. Oftentimes though, that’s good enough.

So ultimately, if meat alternatives can be tasty and cheap, they’ll continue to grow in popularity at the expense of meat. We’re already seeing this happen.