The internet's big carbon footprint need not doom the climate 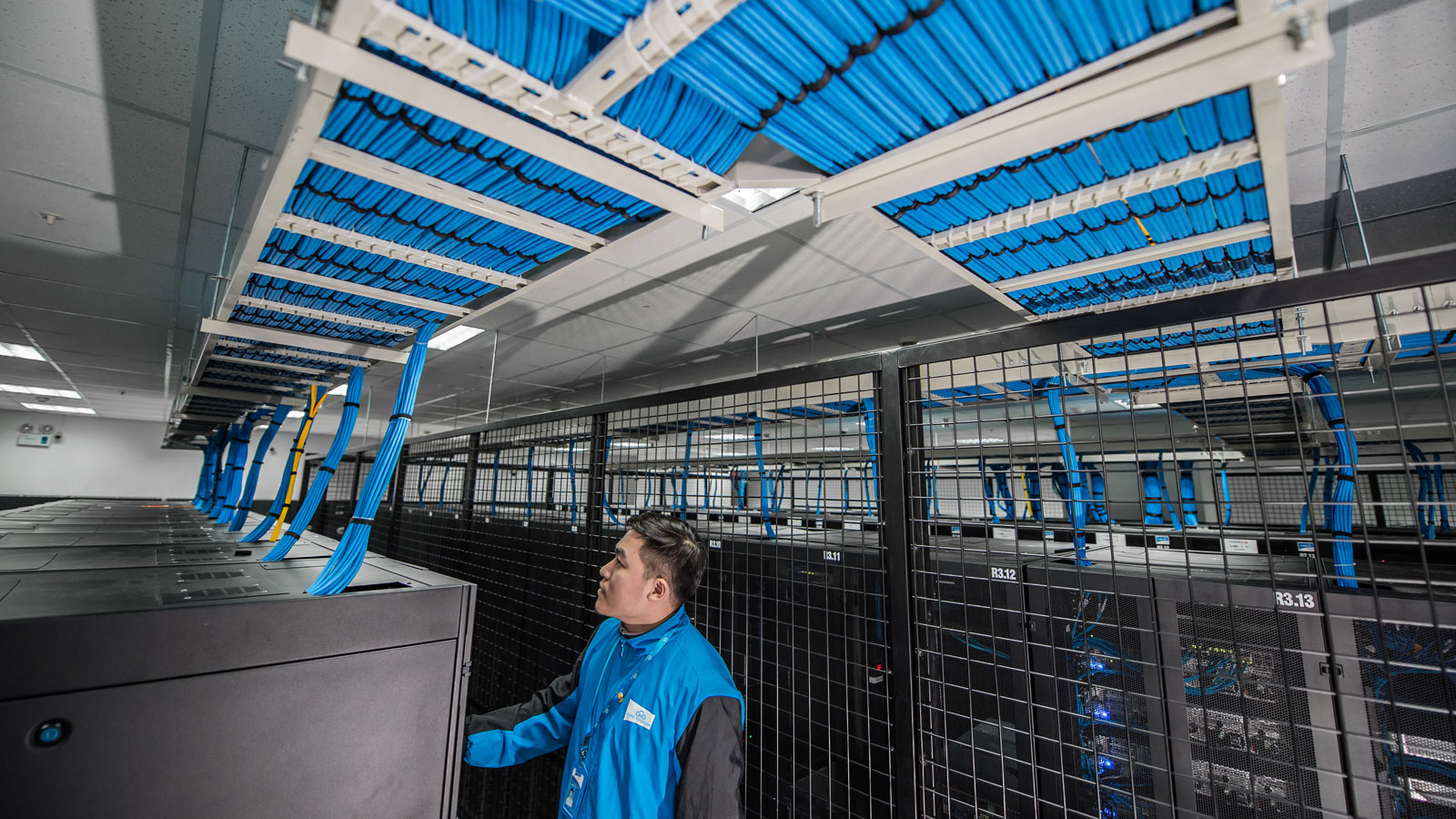 Power-hungry data centers, the backbone of the internet, account for an estimated 1% of global energy demand. (Photo credit: Daoducquan / Wikimedia)

For many, people life moved online in 2020. From preschool to dissertation defenses, first dates to weddings, video calls brought us together. To entertain ourselves, we streamed concerts and movies, played video games, and scrolled social media.

Demand for internet services was already rising before the COVID-19 pandemic, and growth will continue once people are able to gather safely in person again. That’s raising concerns about the electricity needed to power servers, networks, and devices – and the resulting consequences for the climate.

Eric Masanet, a professor in sustainability science for emerging technologies at UC Santa Barbara, says the internet sector accounts for 2 to 4% of global energy use. Data centers alone are estimated to account for 1% of global energy demand, more than many countries use.

But Masanet said it is not helpful to bash people over their internet use.

“You shouldn’t feel bad about it – about working from home, about streaming more, about sending emails,” he said. “People should know that they don’t have to feel guilty about using digital technology.”

So far, improved energy efficiency has helped check the internet’s power consumption despite soaring demand. And a switch to renewable sources of electricity could make it more climate-friendly. Large technology companies such as Google, Microsoft, and Amazon have all been investing in renewable energy projects. But experts say it is hard to monitor how effective this transition is because the leading technology companies are large, opaque, and largely unregulated.

Power-hungry data centers are buildings or spaces housing the computers and communications hardware that store, process and transmit the data that run the internet. Everything you do on the internet is connected to data centers.

“Data centers are the backbone of the applications, really the backbone of the cloud, of enterprise computing, so everything that is fundamental to an organization runs through a data center,” said Shawn Mills, founder and CEO of Lunavi, which started out as a green data center company and has grown into also providing other digital services.

Netflix, for example, uses Amazon Web Services to run its application. So when you are streaming a Netflix movie or series, it is delivered via an Amazon data center somewhere in the world – maybe in northern Virginia, a major hub for hyperscale data centers.

As internet use increases, the hyperscale data center business is booming. According to a report by Synergy Research Group, by the end of 2019, there were 504 large data centers in operation – triple the number in 2013 – and another 151 were being planned or built. In 2019, Amazon and Microsoft together accounted for half of the new data centers in development.

Data centers consume a lot of energy. The servers and other devices need constant, reliable power, and the electronic equipment needs constant cooling. Understanding the energy and emissions use is difficult because many technology companies are not transparent. Renee Obringer, an environmental engineer with the National Socio-Environmental Synthesis Center, said the lack of data was a concern to a team she worked with to analyze the carbon footprint of the internet.

“So far there isn’t much in the tech industry. If they do release stuff, it’s generally because they have chosen to do that and they think it will be good for their business,” she said. “Google has released a lot of information on their data centers and that’s largely because Google is very advanced in the technology they’re using to make sure their data centers are as efficient as possible.”

Efficiency is growing with demand

The dearth of transparent data forces researchers to resort to complex analyses and models. Still, they say that even as demand for computing power has swelled, the energy data centers required to run have remained relatively stable, thanks to rapid gains in energy efficiency.

“We keep seeing studies that say, ‘Netflix is destroying the climate’ or your emails are, or zooming is bad,” Masanet said. “It’s kind of an alarming view of the internet’s footprint and that narrative is false. These systems are really complicated. The technology improves really rapidly. It gets more efficient not every year [but] every month when the technology upgrades.”

Mills founded Lunavi in 2007 as concern was growing about the environmental costs of technology. Lunavi focused on designing and building the most efficient data center possible.

“We generally have the philosophy that the greenest electron is the one that is never used,” he said.

Lunavi designed data centers to take advantage of natural cooling processes instead of power-hungry air conditioners. Mills said that since the company started, technological gains in electronics have allowed for more efficiency gains in cooling.

“Back in the day it used to be literally, ‘I need it to be 69.5 degrees in my data center plus or minus half a degree,'” Mills said. “Now data centers are able to handle a wider tolerance. It can be a 10- to 15-degree change in temperature and still keep the same performance.”

Efficiency gains are important because data networks have a high fixed energy cost. Masanet said that even in 2020, when individuals were spending more time online and demand was up, there was no obvious jump in network energy use.

Like data networks, data centers have fixed energy costs, though those costs are more variable. Specific information about the 2020 energy consumption of data centers was not available at the time of publication.

Going forward, demand requests from applications and new technologies provide the most cause for concern, not one person’s Netflix binge. The growth of new technologies requiring a lot of energy – like artificial intelligence, 5G, virtual reality and blockchain – could mean that in the future, efficiency improvements will not keep up and data center energy use will skyrocket.

“That’s one saving feature,” Masanet said. “There’s a lot of progress in shifting to renewables that will help keep emissions in check even if absolute energy use goes up.”

According to the International Energy Agency, information and communication technology companies accounted for about half of global corporate renewables procurement in the past five years.

Lunavi, for example, partnered with an electricity co-op in its headquarters state of Wyoming to ensure its energy use is covered by renewable energy credits. The company has been recognized by the EPA as one of the top 30 U.S. purchasers of renewable energy in technology and telecom. According to the EPA, 105% of Lunavi’s electricity use is powered by the wind.

“We’ve been very proud of leading that charge,” Mills said.

The key is transparency

“A lot of industries, particularly industries that we think of when we think of CO2 emissions, are regulated in the sense that they have to provide transparency in terms of their emissions,” Obringer, said. “So with the auto industry or other big emitters, we can find a lot of those values because they’re expected to produce annual reports.”

Some of that policy work is moving in the right direction, Masanet said.

An introduction to the state of wind power in the U.S.

While the future energy use of new technologies remains uncertain, many experts feel optimistic that sustainability is possible: “My gut feels like the industry is moving in the right direction,” Mills said.