Look no further than the COVID-19 pandemic for proof.

The sixth mass extinction in Earth’s history is accelerating as humans rapidly and relentlessly destroy the natural world, according to a new study looking at the loss of terrestrial vertebrate species. And the crisis poses an existential threat not only to thousands of animal and plant species, but to human civilization as a whole.

The analysis, published Monday in the Proceedings of the National Academy of Sciences, comes as nations around the globe reel from the coronavirus pandemic — rooted in environmental destruction and the latest novel infectious disease to leap from animals to humans, with devastating consequences.

Researchers examined data on more than 29,000 species of amphibians, birds, mammals and reptiles and found that more than 500 of them ― 1.7% ― are “on the brink of extinction,” with populations of fewer than 1,000 individuals. More than half of those species have populations below 250, they found.

“The ongoing sixth mass extinction may be the most serious environmental threat to the persistence of civilization, because it is irreversible,” the authors write in the report. “Thousands of populations of critically endangered vertebrate animal species have been lost in a century, indicating that the sixth mass extinction is human caused and accelerating.” 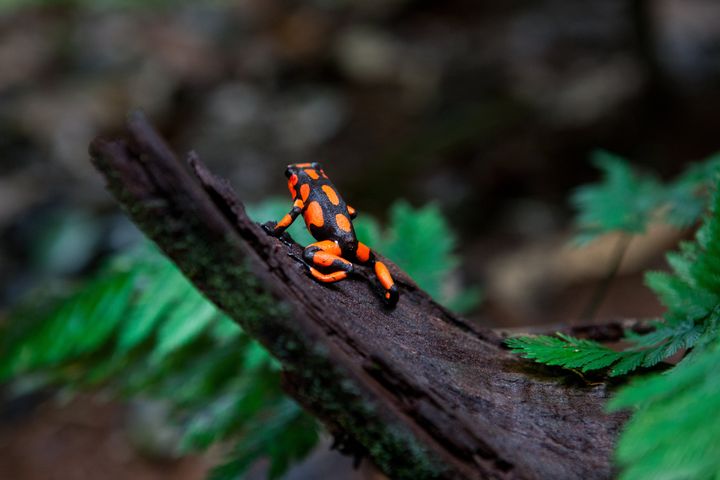 RONALD PATRICK VIA GETTY IMAGES  - A poisonous harlequin dart frog on a tree trunk in the jungle on Oct. 4, 2012, in Utria National Park, Colombia.

One reason for this alarming trend is that human pressure on natural ecosystems continues to mount. The authors point to COVID-19 as the most recent example and stress that their results “reemphasize the extreme urgency of taking much-expanded worldwide actions to save wild species and humanity’s crucial life-support systems from this existential threat.”

“The vaccine for Covid-19 was natural habitat,” Gerardo Ceballos, an ecologist at the National Autonomous University of Mexico and lead author of the study, told The New York Times. “The pandemic is a great example of how badly we’ve treated nature.”

Scientists believe that the coronavirus that causes COVID-19 originated in bats and crossed over to humans at a live animal market in Wuhan, China.

The analysis includes a call for global action. Along with advocating for a complete ban on the trade of wildlife for human consumption in China and throughout Asia, the authors argue that the scientific community has “a scientific and moral imperative” to do whatever necessary to stop what they describe as “biological annihilation.”

“In view of the current extinction crisis and the lack of widespread actions to halt it, it is very important that scientists should metaphorically take to the streets,” they write.

A United Nations report last year found that humans have driven up to 1 million species around the globe to the brink of extinction, and the global body released a draft biodiversity plan in January that calls for protecting 30% of all lands and oceans by 2030 to combat the crisis.

Tierra Curry, a senior scientist at the Center for Biological Diversity who was not involved in the new study, said in a statement that the findings confirm yet again that humans are gambling with their own long-term survival.

“Extinction is a political choice,” Curry said. “We’ve reached a crossroads where our own future is at stake if we don’t move away from fossil fuels and end wildlife exploitation, and at the same time, necessarily, address poverty and injustice. Meanwhile the tone-deaf Trump administration has gutted nearly 100 environmental regulations, including the Endangered Species Act.”

The Trump administration has finalized regulations that significantly weaken the Endangered Species Act, and several high-ranking administration officials deeply detest the 1973 law, slamming it among other things as “a sword to tear down the American economy.”