The Earth Is on Fire 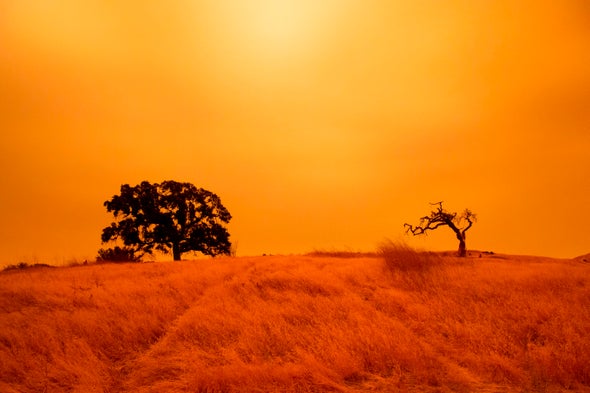 I’ve never known an Earth that wasn’t on fire.

I"m 23 years old, and I’m not alone. My entire generation has come of age in a world so defined by climate change and human destruction—by forests burning and glaciers melting, by extinguished species and rising seas—that it’s sometimes been hard to fathom what an even more dismal future might look like.

That is, until the pandemic reared its ugly head, bringing about the kind of worldwide lockdowns and upheavals of daily life that have given terrifying prescience to the term “global emergency” while still falling far short of what scientists say will be the worst environmental catastrophes that await us. The fate of nature, like so much else, has been an agonizing side-story to the virus—a real-time plot that is being followed most closely, I think, by those of us young enough to one day see the worst of it.

At first, things seemed hopeful. Struggling to adjust to the new normal of life in quarantine in March and April, we were relieved to read that emissions levels had dipped, even if only temporarily, and that the skies over New Delhi and Los Angeles and Buenos Aires had cleared of smog. I smiled, as we all did, to see that animals were roaming free through quiet cities and traffic-free streets (in photos that became so popular that others were inevitably falsified). Nature seemed to be reclaiming spaces humans had abandoned.

Perhaps, I wrote in April in a letter to a friend, we were all peculiarly drawn to those news stories of goats and lions and dolphins reoccupying spaces emptied of humans because we’ve long been aching for reminders of a natural world that has overwhelmingly been lost. In the midst of so much present grief, such storylines gave us faith in Nature’s resilience. And maybe, some optimists speculated, it would even inspire us to be better stewards of our planet when this was over. Indeed, there were some concrete benefits to what scientists in the journal Nature have recently coined the “anthropause”: it was a once-in-a-lifetime opportunity for humans to understand our impact on wildlife in a crowded world that seemed, for a moment, a little less crowded.

But pandemics like this happen, and will keep happening, because we humans have long encroached upon wild spaces. So, I was hardly surprised when the more significant, more harrowing evidence began to emerge. The great rainforests and tropical wetlands of Latin America, in the absence of international watchdogs and local enforcement, have been slaughtered and burned like never before. As the pandemic rages on and quarantine is treated as a tiresome inconvenience, global emissions have returned to normal levels. In May, there was an Exxon Valdez–sized oil spill in the Russian Arctic, followed by others in places like Mauritius and Venezuela—unfathomable ecological catastrophes that are buried beneath headlines of case numbers and mortality rates. Illegal poaching is on the rise in Africa. The list goes on.

And that’s only what we’re seeing from afar. While some of us may feel guiltier than others, we’ve all somehow regressed in our daily choices since this began—accepting that extra plastic bag at the supermarket, ordering takeout despite all the single-use containers, and, if we’re privileged enough, driving instead of taking public transportation—because, well, “it’s a global pandemic,” we say to ourselves. Take a walk outside, and you’ll find the potentially virus-laden masks and latex gloves that now litter our streets and beaches and parks, and which will eventually fill our rivers and lakes and seas.

It’s as if the pandemic has suddenly given people everywhere even more of a license to dirty the world—if that’s even possible—with carelessness, if not outright contempt. And I fear that for every day it continues, unabated by the decisions of our vile president, today’s young people will be paying the ecological price for the rest of our lives.

By young people, I’m not just talking about for those of us living in the United States, about to vote in the most consequential presidential election we may ever live to see. I’m talking about children from impoverished families worldwide whose health and food security has plunged into even more uncertainty because of the devastating one-two punch of climate change and the virus—for the global environment emergency, like the pandemic, also lays bare systemic racism and socioeconomic inequities. I’m talking about young climate organizers across the globe who have been calling out people’s ignorance of science for years—the same problem that has gotten us into the worst of the pandemic and our current ecological catastrophe—and feel now more than ever that they’re screaming into a void.

And, perhaps most brutally, I’m talking about young Indigenous people all over places like Latin America whose entire cultures (many of them predicated on harmony with nature) are being erased as their elders die of infection and as illegal ranchers and miners, ever-encroaching during the pandemic, violently remove them from their ancestral lands.

Here in the U.S., though, the chorus is louder now than it’s ever been—as some of the worst wildfires on record tear through the American West, painting the sky orange, and as hurricanes ravage the South, leaving behind apocalyptic fields of ruin. In today’s pandemic moment, nature’s storyline has reached a low point. It’s unfathomable to me that some people can still so easily shrug it off—especially if they have kids, or love anyone who is younger than them—while for so many in my generation, it is such a constant, excruciating worry. Apathy, let alone denial, can no longer be an acceptable option, because we know that if we stay on this course, the destruction will inevitably come for us, too.

But I like to think that the research and reckoning of resilience from the original “anthropause” still gives some hope—perhaps if we all live a little lighter, if we listen to those who are in harmony with the land, and if we take solace in all that there is to love in the world—that nature might meet us halfway. That if we start by turning things around in November and following it up with the most drastic action possible, we could still harness that final, fleeting opportunity to build a cleaner and greener future for us all. The planet, and our fate on it, hang in the balance.