Many people are concerned about our climate and would like to do something. But in between a complex economy, mammoth corporations, and politicians that rarely listen, it’s easy to feel trapped and powerless. It seems that we, the citizens, hold the least power in this equation.

But that’s not exactly true. Not only can we make a difference, but we must make a difference. When companies, politicians, and other people don’t take the necessary measures against climate change, it’s up to us to push them in the right direction.

But first, we need to know what the right direction is.

The problem with climate change is that it’s incredibly complex. As if that wasn’t enough, addressing climate change also needs to incorporate the human factor — the economy we’ve developed, our social values, and our political system. Understanding that we need to reduce our greenhouse gas emissions is simple enough, but understanding how to do that (and more importantly, how to do it in a realistic way) is a whole different ball game.

If anyone understands this ball game, it’s Mark Jaccard. Jaccard is a professor of sustainable energy in the School of Resource and Environmental Management (REM) at Simon Fraser University, working on developing models that assess sustainability policies. He has published over 100 peer-reviewed papers, but his expertise spreads far outside the academic environment. He has worked with energy agencies, the IPCC, national and international advisory councils, and is one of Canada’s most prominent energy policy advisors.

Jaccard has seen governments come and go. He has seen ambitious policies succeed, but also fall down flat in the muddied arena of modern politics. But as an economist, he views it all through the lens of economy — and herein lies his unique quality as a writer.

I’ve never had the pleasure of meeting him, but to me, he seems like a genuinely nice person. At the very least, he seems to truly care about fighting climate change — enough to engage in civil disobedience in his 50s, as he details in one chapter. He’s also a good writer; doesn’t get distracted, is coherent, and has a pleasant style. But as I read through The Citizen’s Guide to Climate Success, it struck me that something else really sets the book apart: the author’s understanding of the interplay between climate change, economy, politics, and people.

It’s easy to feel powerless against climate change, but we can do something, and we can have an impact. However, there are also many myths about what can be done (and what should be done) to address this.

For instance, using more efficient light bulbs and turning off the light when we’re not in the room is a good thing. Giving up meat and using electric cars or bikes can make an even bigger difference. But at the end of the day, Jaccard emphasizes, we won’t get anywhere until we decarbonize our energy and our transportation system. The beauty of this is that we can do this, now — we don’t need a magical technological novelty, we can do it today, with the means we already have available.

The bad thing is that it’s a mammoth task. 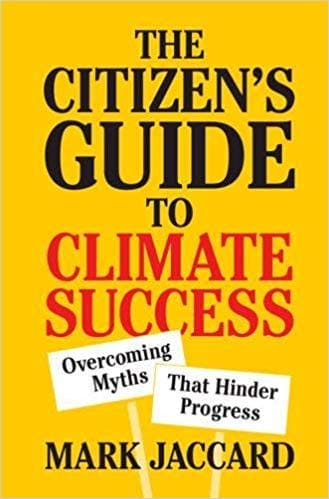 Jaccard’s own research showed that energy efficiency alone won’t save us. This is still one of the most common myths when it comes to climate transition, and it needs to go away. We need transformative change and decarbonization.

Another myth is that cheaper renewable energy will be sufficient for the transition. That’s not only untrue, but it’s also dangerous. It’s untrue because simply having cheaper renewable energy doesn’t necessarily mean renewables will completely replace fossil fuel. It’s much more likely that we will simply use more energy altogether — both fossil and renewable — which is a certain recipe for a climate disaster. The idea that as something becomes more efficient and cheaper we use more of it is not new: it’s called Jevons Paradox, and we’ve observed it in practice as early as the Industrial Revolution. Simply relying on cheap renewables is also dangerous because it demotivates policy action. “If renewables are cheaper than fossil fuels anyway,” a policymaker might argue, “why bother implementing new policy at all?”.

These are the sort of myths and issues addressed in the book. I won’t lie, it can feel overwhelming at points. The sheer magnitude of the task can make it seem like an uphill battle. But if ever there was an uphill battle worth fighting — this is it.

The Citizen’s Guide to Climate Success is an important weapon in this battle. You can use it to arm yourself in the most important way: gaining valuable information. By understanding what works and does not work, we, the citizens, can turn the tide and start producing the transformative change that’s necessary to avoid the catastrophic impacts of climate change. I would recommend this book to anyone interested in climate change, or to anyone who’s genuinely curious and wants to look deeper into the important, complex, and often murky problem of addressing climate change.

The Citizen’s Guide to Climate Success goes deeper than most books on climate change. It is an honest look into the eye of the storm. I loved reading it.

The Cambridge University Press has also released a free PDF of the book which you can read here.