The Biggest Wildfire in California History Is Happening Right Now 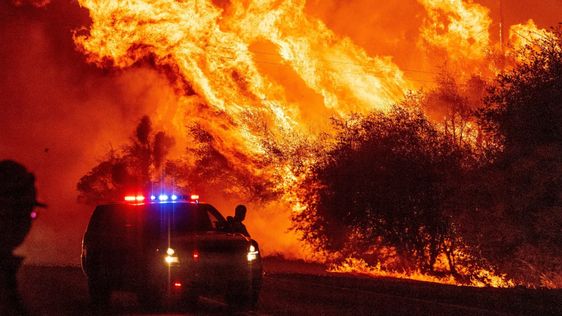 A law enforcement officer watches flames launch into the air as fire continues to spread during the Bear fire in Oroville, California on September 9, 2020. Dangerous dry winds whipped up California’s record-breaking wildfires and ignited new blazes, as hundreds were evacuated by helicopter and tens of thousands were plunged into darkness by power outages across the western United States.Photo: Josh Edelson/AFP (Getty Images)

As dozens of active wildfires turn the West Coast of the U.S. into Hell on Earth, one has risen to become the biggest wildfire in California history.

The August Complex fire now engulfs a record 471,000 acres in the Golden State, eclipsing the 459,000 acres burned during the 2018 Mendocino Complex fires, which held the previous record. At only 24% contained, the fire is still likely to grow in the coming weeks.

The August Complex fire began as 37 separate fires that started in the Mendocino National Forest during an Aug. 17 lighting storm. While the size of the August Complex is record-setting, it is mostly located in remote areas and has burned just 26 structures, reports the Los Angeles Times. One person has died so far as a result of the August Complex, according to the National Weather Service. The most destructive wildfire in California remains 2018's Camp Fire, which left 85 people dead and more than 18,000 structures destroyed. Hopefully, it stays that way.

As the California Department of Forestry and Fire Protection (Cal Fire) pointed out on Thursday, six of the 20 largest fires in California history have taken place this year. The fires are being fueled by a series of record-setting heat waves, which are synonymous with global warming. That makes the catastrophe unfolding a vivid and terrifying reminder of the toll climate change is taking and will continue to take on ecosystems and humanity—even if we drastically change everything to reduce warming emissions immediately.

On top of the death and destruction of entire towns in the states, the massive fires have literally turned the sky red and blocked out the Sun, even in areas far from the flames, and resulted in the worst air quality on Earth.

Obviously, this is all horribly bad. But what’s worse is that this level of wildfires is only likely to become more frequent as human activity fuels further global warming, creating greater conditions for wildfires. As bad as 2020 is, without an immediate course-correction, we may soon look back on it as the good old days.