The $21 Billion Reason to Clean Up Abandoned Oil Wells 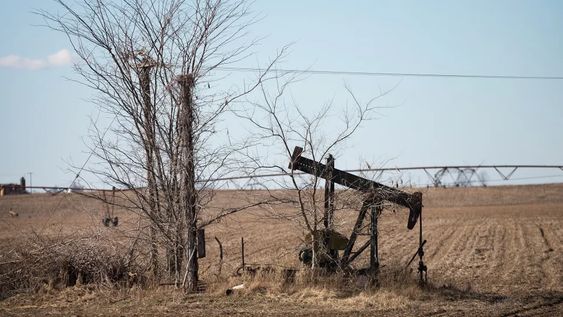 An idled pump jack, once used to extract crude oil from the ground, sits rusting above a well in a farmers field near Ridgway, Illinois.Photo: Scott Olson/ (Getty Images)

A study published Monday in Nature Sustainability calculates that abandoned oil and gas wells cover more than 2 million acres of the U.S. And if that land is restored, it could deliver billions of dollars in benefit for a fraction of the cost of restoration.

There are an astronomical number of abandoned oil and gas wells across the U.S., with some estimates reaching as high as 3.2 million sites. Usually, fossil fuel companies set up bonds to provide for future remediation of wells, but as the industry flags, that money tends to dry up, leading to some companies to simply abandon their wells. A Los Angeles Times investigation last year found that while the cost of plugging one of the state’s 35,000 wells could rise as high as $150,000, oil companies in the state provided just $230 per well for cleanup costs on average.

According to the new study, cleaning up these wells and restoring the land around them would not only safeguard against the harmful impacts of abandoned oil and gas infrastructure—including methane leaks and groundwater contamination—but could deliver up to $21 billion in benefits from agriculture and carbon sequestration. “For people who live near that land–that [money] has real meaning,” said Matt Moran, the study’s lead author and a professor of biology at Hendrix College. What’s more, it would only cost about $7 billion to clean up all of them, the study estimated, a pretty good return on investment.

First, Moran and his coauthors used a private national industry database to calculate the acreage in the Lower 48 states that is currently taken up by oil and gas infrastructure. The team found that there were around 2 million acres across the U.S. occupied by abandoned wells, an area bigger than the state of Delaware.

“I think we’re the first to quantify [the number of abandoned wells] for the whole U.S.,” Moran said.

Next, the study authors used a combination of techniques, including high-quality satellite imagery, to analyze a random sample of wells and determine what type of land it once was or could be restored to by comparing the landscapes around them. They then calculated what these restored landscapes could be worth in terms of what’s known as ecosystem service benefits.

“Landscapes, when they’re in their natural state, have value that’s real economic value to all people,” Moran said. “There’s a lot of land in the U.S. and across the world that’s basically not being used for anything.”

For this study, Moran and his coauthors focused on two specific ecosystem service benefits: agricultural products, like food from farms, and carbon sequestration, or how much carbon the natural ecosystem could absorb once restored. The study uses two metrics to put a price on the benefits of turning land over for these purposes. One is market prices for agricultural products while the other is the social cost of carbon, a measure that calculates the myriad benefits of reducing carbon pollution. When added up, the study found that cleaning up the 2 million acres of wells across the U.S. would provide $21 billion in benefits.

“If you have an abandoned piece of property, and you restore it back to its original condition, it’s worth something, and it’s worth more than it costs to do that,” Moran said. “If we invest in land restoration, we get a lot out of it.”

Even that calculation, though, could be conservative. Moran’s study only used wells known to the oil and gas industry. It doesn’t not account for abandoned wells, many of them older, that the industry has no record of. Nor does it project a future where active wells become idle as the world moves away from fossil fuels.

While Moran’s study may be the first to put a cash price on the benefits of restoring land, the idea of cleaning up oil wells to provide another economic benefit has been gaining steam for years. Proponents of the Green New Deal have popularized the idea of putting oil and gas workers to the task of plugging wells the industry has abandoned as a way of providing just transition job. The Biden administration has started touting this idea as a centerpiece of its Green New Deal-light plans.

“We are going to create more than a quarter-million jobs to do things like plug in millions of abandoned oil and gas wells that pose an ongoing threat to the health and safety of our communities,” Biden said during a speech in January.

Ultimately, Moran said, he hopes his study makes people think in different ways about all the different strategies available to combat climate change.