Sweeping changes are on the way for Alaska lands and wildlife

The warming climate is expected to bring wide-ranging impacts, including to the state's iconic salmon populations. 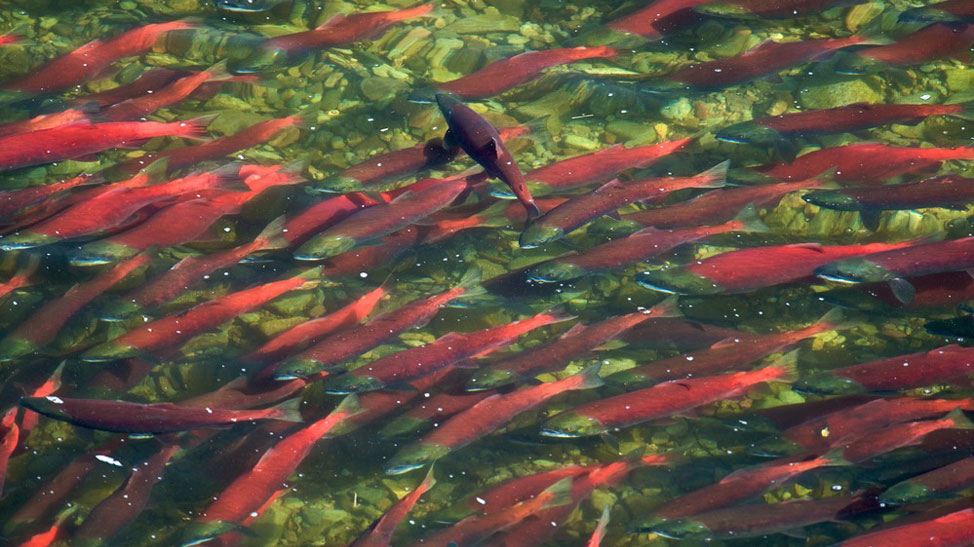 The vast wild acreage of the U.S. National Parks in Alaska  has provided scientists an ideal laboratory to study the changing climate and how factors such as melting permafrost and changing snow conditions are affecting landscape and wildlife.

Recent research in the national parks by Hayward and others reveals that the changing mix of snowfall and rain in Alaska’s rivers and streams could create problems for spawning salmon and damage more of their eggs before they can hatch. Melting permafrost, meanwhile, increases the amount of ancient carbon available to microorganisms which in turn nourish the algae and invertebrates and ultimately the fish that feed on them. Mysteriously, however, this increase in “ancient carbon” in the food web “results in smaller and skinnier fish,” and scientists need to do more research to understand why.

These studies are detailed in the summer 2020 issue of the National Park Service Alaska Region’s semi-annual journal, Alaska Park Science. Titled “Below the Surface: Fish and our changing underwater world,” it focuses on fisheries, covering over a dozen studies conducted everywhere from popular tourist destinations like Kenai Fjords National Park and Denali National Park and Preserve, to remote and lesser-known locations like Cape Krusenstern National Monument and Noatak National Preserve.

The future of Alaskan snow and impacts on salmon

Hayward co-authored the study that investigated how the snowpack is changing, and how these changes will affect the state. He and an inter-agency team of scientists focused on how changes in Alaska’s snowpack may impact one of the state’s most vital and iconic species: salmon. They explore this topic in the Alaska Park Science article, “So goes the snow: Alaska snowpack changes and impacts on Pacific Salmon in a warming climate.”

“Salmon are really critical in most of Alaska,” says Steph McAfee, climatologist at University of Nevada, Reno, and co-author of the study. “If you live there, you probably fish for salmon and put them in your freezer for the winter. Certainly people come up to just fish, so there are some important tourism and travel aspects in all of that. They’re economically important, and so the question ‘What would changes in climate mean for salmon?’ is really important for Alaska on many, many fronts from subsistence to the enormous commercial fishery.”

Freshwater is crucial for Pacific salmon, and changes in the snowpack affect the waterways the fish need. Factors like when, where, and how much snow falls, along with melt patterns and timing, can adversely affect streamflow, water temperature, and other important attributes of freshwater systems. These can, in turn, lead to changes in how salmon grow, their movement patterns, reproductive success, and even their very survival.

The researchers found that lower elevations in south-central Alaska may experience three to five fewer months of reliable snow cover annually by 2040 to 2069, which the paper notes is “most of the historical reliable snow season.” Southwest Alaska is also projected to see a startling reduction in snow season, likely shrinking by one to five months as soon as the 2050s. “Parts of the region may have no months with persistent snow cover,” they wrote.

“The rapid rate of climate change impacts exceeds what we know salmon have been able to adapt to in the past,” the study authors reported. Fish are just one of many organisms that live in and rely on these waters, and the impacts are likely to ripple through marine and freshwater systems and the food web.

This changing snowpack will influence life downstream in a number of ways, as salmon and other species face changes in streamflow volume and timing, sediment, temperature, and other factors. Higher flows during winter mean salmon eggs – which are laid in gravel – could be scoured and damaged, resulting in increased mortality. Changing conditions could impact migrations and create barriers as a result of higher water temperatures, sediment, and shifts in streamflow. Warmer waters could also impede growth and development of young fish, and cause physiological stress to adults, resulting in reduced spawning.

Given Alaska’s geographical diversity, different areas likely will experience different snowpack changes, according to the study’s authors, who noted that most areas of the state will have shorter snow seasons, later snow accumulation in the fall, and earlier spring melt. Species like snowshoe hares, wolverines, and lynx also rely on the snow for everything from camouflage, to denning, to hunting.

A changing snowpack also affects which species of plants can grow and thrive when wildfire season begins, and also affects recreational activities and municipal services involving hydroelectric power and water.

Changing snow and ice seasons are also likely to disrupt transportation in the state. In Alaska, 86% of municipalities are not connected to the road system, and in many of these areas, it is often easier to travel cross-country via a snowmobile or dogsled or traverse an ice road in the winter than it is to navigate tussock grass tundra or rivers in the summer.

Melting permafrost is another factor affecting a wide variety of Alaska species and their food webs.

“Across the Arctic, permafrost stores vast amounts of organic carbon, much of which has been kept ‘in the freezer’ for thousands of years,” according to the Alaska Park Science article, “Permafrost carbon in stream food webs of Arctic Alaska,” by National Park Service ecologist Jon O’Donnell and colleagues. When this permafrost thaws, it releases greenhouse gases like carbon dioxide and methane, and their carbon can make its way to streams, lakes, and waterways through soil erosion and groundwater flow.

O’Donnell and his U.S. Geological Survey co-authors examined how ancient carbon may affect ecosystems, studying the hydrology, biology, and chemistry of 12 watersheds in three Arctic parks and preserves: Bering Land Bridge National Preserve, Kobuk Valley National Park, and Noatak National Preserve. They analyzed carbon isotopes to determine where the dissolved carbon found in the streams came from and how old it was.

“If you thaw all this permafrost, and you release all this old carbon that hasn’t been cycling but now you introduce it into the system, you’re going to have this positive feedback to the atmosphere that is going to continue to drive climate warming.” O’Donnell says. “So that’s one concern – old carbon is kind of like a new player in the global carbon budget.”

They found some fish, including juvenile Arctic grayling and Dolly Varden, could use carbon that was up to 3,500 years old. As the fish can’t consume it directly, researchers believe the ancient carbon likely enters the food web through algae and microbes, which are then consumed by invertebrates before being eaten by fish, though they plan on conducting further research to learn more about how this system works.

The fish that consumed ancient carbon were smaller than other fish, with fewer energy reserves. “We observed that there was actually sort of a negative relationship between how much old carbon is getting into the fish and how big they were getting,” O’Donnell said. “We were expecting the opposite.”

It is not known how this finding may affect other species, including important subsistence resources like salmon and white fish, though the researchers plan to continue studying what may happen as the permafrost continues to melt and ancient carbon enters waterways.

As scientists seek answers to these and other questions, O’Donnell notes that national parks are a great place for climate change research because they are largely free of types of human impacts common to more urban areas. That dearth of direct human influence, he said, makes parks “particularly good for isolating the direct or indirect effects of climate because in terms of the human fingerprint – there is almost none.”

“You have these basically pristine ecosystems that are being altered by rapid climate change,” O’Donnell said. “So it’s kind of an optimal place for testing hypotheses about climate.”