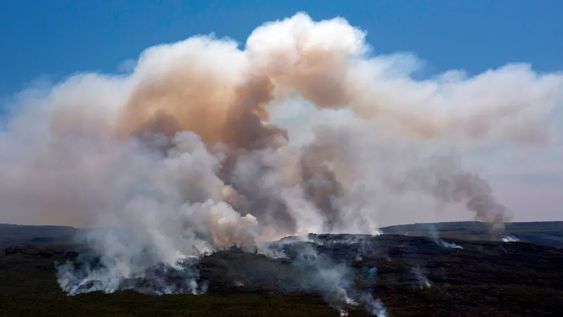 For years, climate scientists have been sounding the alarm about the increasing likelihood that the Amazon rainforest, now one of the biggest absorbers of carbon in the world, could actually become a source of carbon within just 15 years. New research shows that for some other kinds of tropical forests nearby, that’s already happening.

That means forests contain less foliage to suck greenhouse gas out of the atmosphere. To make matters worse, when a tree catches fire, it releases all the carbon it sequestered in its lifetime, meaning the forests become a source of planet-warming emissions. And amid the climate crisis, this problem is even more severe, because amid hotter and drier conditions, the forests don’t produce enough humidity to quickly put out the flames, meaning more area burns with less effort.

A new study, published in Science Advances on Friday, aimed to see how South American forests’ carbon intake has changed in recent years. To do so, the authors analyzed greenhouse gas monitoring data from 1987 to 2020 on 32 deciduous, semi-deciduous, and evergreen forests—each of which has seen deforestation—in the lush state of Minas Gerais in southeastern Brazil. Altogether, the area they examined spanned some 81.5 acres (33 hectares).

By plugging this data into statistical models, the authors found that on average, these forests are now sucking up 2.6% less carbon per year than they were 33 years ago. At the same time, the forests’ carbon output from fires increased by 3.4% per year, meaning overall, they’re losing their ability to absorb the gas. These changes were enough to push the forests over the edge from carbon sinks to carbon sources. The authors fear their findings may be able to be extrapolated to tropical forests in the region as a whole.

The data shows that the switch happened in 2013. That year, on average, the examined forests released 0.14 U.S. tons per 2.5 acres (0.13 metric tons of carbon per hectare), or the equivalent output of driving 323 miles in a diesel car.

The authors’ findings are particularly troubling because separate research recently found that the importance of tropical forests’ carbon sequestering is nearly as important as that of the Amazon rainforest.

The scientists note that all is not lost. We should take pressure off of these forests by curbing our greenhouse gas emissions, thereby slowing the climate crisis. Brazil should also restore these forests’ carbon sinking abilities, protecting forests by halting intentional burning.

“The key way is conservation,” Vinícius Maia, a researcher at Brazil’s Universidade Federal de Lavras, wrote in an email.

The authors say that there should be particular efforts to preserve deciduous forests, which are the driest and warmest kind the researchers examined and saw an even sharper increase in carbon emissions. But really, these protections should extend to all foliage in the area.