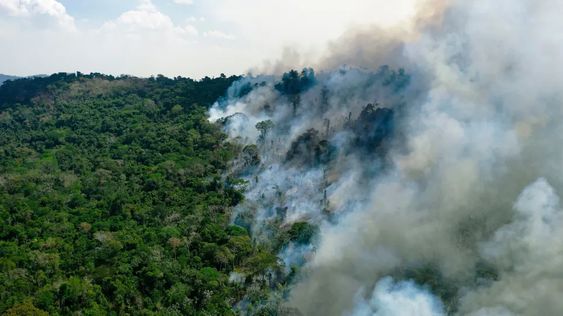 Historically, the Amazon rainforest has been one of the planet’s most important sources of carbon sequestration, caching billions of tons of carbon from the atmosphere every year. For decades, scientists have cautioned us not to take this crucial service for granted, warning that in just 15 years, the Amazon could meet the fate of other large forests and become a source of greenhouse gases. Devastating new research shows that bleak scenario has likely already begun.

A groundbreaking study published in the journal Frontiers in Forests and Global Change on Thursday suggests that the Amazon rainforest is exhaling at least as many greenhouse gases as it breathes in. The analysis, conducted by more than 30 researchers from North and South America, is the first to ever assess the cumulative cycle of all the planet-warming gases the jungle emits compared to what it sucks up and stores in plants and soil.

Until now, the authors write, climate research in the Amazon Basin has mostly focused on the rainforest’s carbon cycle—how trees turn atmospheric carbon dioxide into oxygen while storing carbon, and how they release carbon when they’re set on fire.

“Missing, however, is a more comprehensive consideration of other significant biophysical climate feedbacks,” the study says.

Though the terms are often used interchangeably, carbon is just one of the many greenhouse gases that cycles through the biodiverse, 2-million-square-mile (5.2.-million-square-kilometer) rainforest. In recent years, researchers have found the trees, particularly those in tropical wetlands, emit a surprising amount of methane, a greenhouse gas 80 times more potent than carbon in the short term. The reservoirs that dot the forest are another source of methane emissions as well. Soil sequesters nitrous oxide, another dangerous greenhouse gas. When it becomes drier and more degraded due to logging and climate change, however, it can release more than it takes up. And when ranchers start forest fires to clear space for cattle ranching, they don’t just release carbon dioxide, but also black carbon, a form of particulate matter than can heat up the planet.

What the authors do that’s important is to expand the conversation beyond carbon dioxide, which is what 90 percent of public conversation is centered around,” Patrick Megonigal, associate director of research at the Smithsonian Environmental Research Center, told National Geographic.

The team pored over dozens of previously conducted studies on these myriad processes, developing the most comprehensive assessment to date of the Amazon rainforest’s effect on the climate. They found that despite cliches that the jungle constitutes Earth’s lungs, it’s likely producing more greenhouse gas on net than it’s sucking up.

The continued destruction of the Amazon could only speed this trend up. Deforestation is weakening the forest’s ability to suck up carbon, and is also making the soil even more unhealthy, causing it to produce more nitrous oxide. When the forests are left bare, they also absorb more heat from the sun, which can further dry the soil and trees and cause both to emit even more warming gases. And the climate crisis—itself driven by many of the industries behind deforestation—is increasing warming in the region, amplifying that effect. All this could leave the Amazon cleaved in two, and leave the planet’s greenhouse gas balance increasingly out of sorts.

It’s not too late to reverse course, but in many ways, we’re moving in the wrong direction. Until covid-19 began, global greenhouse gas emissions were steadily on the rise, and they’re expected to make a swift comeback, causing the planet—including the Amazon—to heat up even more. Things have been getting worse on the regional level, too. As the authors note, under Brazilian President Jair Bolsonaro, rates of deforestation in the Amazon has reached a 12-year high. These changes have been ruinous for the region’s biodiversity and the 30 million native people who have lived there for tens of thousands of years.

The biggest factor in the rainforest’s future impact on the climate is how we decide to move forward. As climate scientists have made clear, we still have a window to get a handle on climate change and avert planetary destruction. That will require a global effort to draw down emissions. In Brazil, some positive changes could be on the horizon. Earlier this week, former Brazilian president Luiz Inácio Lula da Silva, who instated many bold reforms to protect the Amazon while in office, was cleared of corruption charges, meaning he can challenge Bolsonaro to reclaim the presidency.

The need to restore the Amazon is urgent, especially for the many local Indigenous communities who depend on it to live. But the rainforest’s fate also has massive implications for the global climate, meaning it affects all of us.