Researchers found indicators of PFAS in roughly half of mascaras, lipsticks and foundations tested 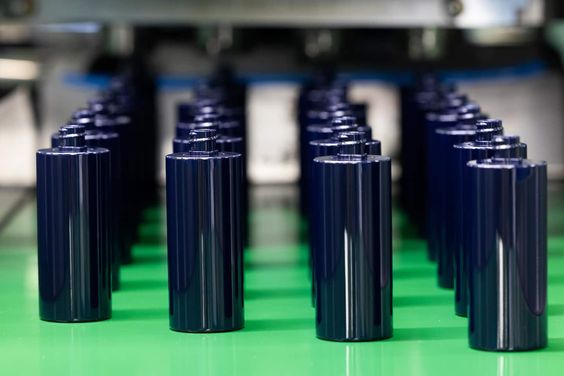 Plastic cosmetic bottles on a production line in Hwaseong, South Korea, on May 27. (SeongJoon Cho/Bloomberg News)

Cosmetics distributed in the United States and Canada are rife with a class of chemicals that have been associated with a number of diseases, including cancer, and frequently aren’t labeled accurately, according to a new study.

Over the last three years, researchers tested 231 cosmetics products in North America for fluorine, an indicator of per- and polyfluoroalkyl substances, or PFAS. The study found fluorine in 56 percent of foundations and eye products, 48 percent of lip products and 47 percent of mascaras.

“We were shocked to see how much is in some of these products,” said Graham Peaslee, a professor of physics at the University of Notre Dame and the principal investigator on the study, which was published in the journal Environmental Science and Technology Letters.

The paper does not name specific companies, calling the issue “widespread.”

“There’s no way for an average consumer to read a label and understand what’s in the product they just purchased,” Peaslee said. “They can’t trust the label, and that can be fixed.”

‘Not a problem you can run away from’: Communities confront the threat of unregulated chemicals in their drinking water

PFAS are man-made chemicals that are highly resistant to oil, grease and water, making them common in food packaging, nonstick cookware (such as Teflon) and numerous other applications. In cosmetics, they help create a slippery shine and make products waterproof.

The chemicals have come under increasing public scrutiny in recent years, including in the Hollywood movie “Dark Waters.” Long-term exposures to PFAS have been associated with health problems that include certain cancers, infertility risks, thyroid disease and weakened immunity. A recent study in the journal PLOS One linked PFAS exposure to worse covid-19 outcomes. And because PFAS do not break down in the environment, they have become known as “forever chemicals.”

‘Forever chemicals,’ other pollutants found around the summit of Everest

Asked about the study, the Food and Drug Administration, which regulates cosmetics, said it does not comment on “proposed or pending legislation” or on specific studies.

On Tuesday, Sens. Susan Collins (R-Maine) and Richard Blumenthal (D-Conn.) introduced the No PFAS in Cosmetics Act. “Our bill would require the FDA to ban the addition of PFAS to cosmetics products,” Collins said in a statement. “Americans should be able to trust that the products they are applying to their hair or skin are safe.”

It is unclear how much of the PFAS found in cosmetics are ingested or absorbed into a person’s system. That, Peaslee said, would require more research. But direct exposure is only part of the problem. Makeup also gets washed down drains or thrown into landfills, where it can then leach into soil and waterways.

In a statement, Alexandra Kowcz, the chief scientist for the Personal Care Products Council, a trade association, called the number of PFAS found “small." She added that “since trace amounts are not intentionally added to products, they are not required to be listed on the label.”

But, Peaslee said, while some PFAS levels they measured were low enough to potentially to be a result of accidental contamination, others were so high that it appears unlikely. “Someone had to add it intentionally,” he said. “We’re making people sicker than they need to be potentially.”

This latest research builds on previous, more limited studies that found PFAS in cosmetics in Europe and Japan. Researcher Ami Zota, an environmental health expert at George Washington University, is unaffiliated with the study and said the results were illuminating, calling the liquid lipstick and foundation results especially surprising.

“Up until now there hasn’t been adequate data on the topic, especially in the U.S. context,” she said. “There needs to be greater transparency.”

There should be greater restrictions on the use of PFAS, or at least stricter labeling requirements, Zota and Peaslee said.

David Andrews, a senior scientist at the nonprofit Environmental Working Group agrees, saying the problem ultimately requires government oversight. “This study highlights that [the issue of PFAS] goes much beyond what’s on the label,” he said. “The FDA should be doing more to monitor the use of these products.”

Last year, California became the first state in the country to ban toxic chemicals in cosmetics — including a number of PFAS. Maryland did the same this month. But the laws don’t take effect until 2025.

The industry has also been moving away from PFAS. Safer silicone is one alternative to PFAS, said Lindsay Dahl, with the skin care company Beautycounter, adding that “our clients are asking for products without harmful ingredients.”

Kowcz, with the Personal Care Products Council, said the organization “has supported prohibition of certain PFAS from use in cosmetics.” That includes the California ban. And in 2018, cosmetic giant L’Oreal committed to eliminating PFAS from its products.

Peaslee said he hopes that calling attention to the PFAS problem in cosmetics can lead to stronger laws and force the industry to change. “The product is going to landfills or down the drain,” he said. “We are going to end up drinking it as a society.”