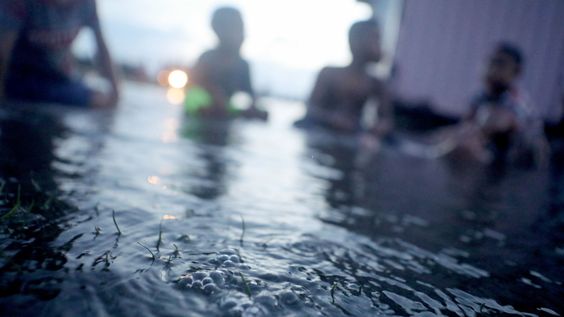 A new study shows we face a wet and costly scenario. In the climate-ravaged future, floods that hit once every 100 years would occur every 10 years—and it could cause $14.2 trillion in infrastructure damage globally. Yes, trillions of dollars.

Published in Scientific Reports on Thursday, the new study takes a look at the consequences of sea level rise. By 2100, up to 20% of global GDP could be threatened by coastal flooding under a worst case scenario. Areas exposed to flooding could also increase by 48%, an area roughly the size of France. But it doesn’t have to be that way. The level of damage depends largely on how much higher greenhouse gas emissions go.

The authors came together from Australia, the Netherlands, and Germany to measure the quantitative damage rising seas could cause. To conduct this analysis, they examined the three processes that drive flooding: tides, storm surge, and waves. They looked at conditions under two climate scenarios, one where greenhouse gas emissions rapidly climate and another where they level off in the middle of century and then decline. The authors used observed data from 1979 to 2014 to test against their models of what the damage could look like in 2050 and 2100.

Once they were able to recreate the sea level rise and potential flooding extent, the team looked to GDP and population databases to figure out what that impact would look like to society. And, well, that impact looks pretty damn bad.

Money is one thing, especially when we’re talking about trillions of dollars worth of damage. The $14.2 trillion price tag for inaction is a huge one the world should absolutely be striving to avoid. But human life is also endangered by rising seas. The paper found that up to 116 million more people will be exposed to coastal flooding by 2100 under the worst-case scenario as rising seas make high tides higher and storm surge more destructive. The paper also flags northwestern Europe, southeastern and east Asia, northeastern U.S., and northern Australia will face the brunt of it. Identifying these so-called “hot spots” is a major benefit of this paper for future research, Kristina Dahl, a senior climate scientist with the Union of Concerned Scientists who was not involved in the study, told Earther in an email.

The findings also show that cutting emissions would also reduce the risk to life and property. The study found those exposed to flood risk would “only” rise by 82 million and the GDP exposed would top out at $12.8 trillion. That’s still not good, of course, and it points to the need to prepare for a wetter future now.

“Adaptation will be an important strategy for the future,” author Ebru Kirezci, a PhD candidate in ocean engineering with the University of Melbourne, told Earther in an email. “This will include building and enhancing coastal protection structures, such as dykes or sea walls, implementing coastal retreat, or deploying coastal warning systems and increasing preparedness. The impacts are global, but, like many other climate issues, specific locations will be impacted more adversely than others as highlighted in our study. This will require careful long-term planning of adaptation strategies to increase the resilience and preparedness of the coastal zones.”

The study offers a unique global perspective into what the impacts could be from sea level rise and the increased flooding communities will face. That pushes the needle of what’s possible to give world leaders a view of the coming destruction, but it also comes with limitations.

It’s a challenging topic to approach globally, Dahl said. She noted other studies that have done this have come up with different estimates of damage and flood exposure, but that it’s clear “sea level rise will threaten the wellbeing of hundreds of millions of people around the world in the decades ahead.”

The authors are forthright about the limitations of the global view of the paper. They hypothesize that some of their findings may be overestimated as a result, but Sean Vitousek, a research oceanographer with the U.S. Geological Survey who was not involved in the study, told Earther in an email that some might be still be underestimated, including the influence of waves. That’s because the authors rely on predictions from the Intergovernmental Panel on Climate Change, which is fairly conservative in its assessment. Much of these limitations, however, are not due to the authors in particular, but the science that’s more broadly available.

“This paper is a step in the right direction to assess the global consequences of sea level rise, and we, the scientific community, have our work cut out for us to continuously refine and improve predictions of coastal hazards and exposure,” Vitousek said. “These predictions matter so much to inform what we’re going to do to address sea level rise.”

Yessenia Funes is a senior staff writer with Earther. She loves all things environmental justice and dreams of writing children's books.