Wildfires have ripped through Greece, leaving its land decimated and its people in a state of peril. 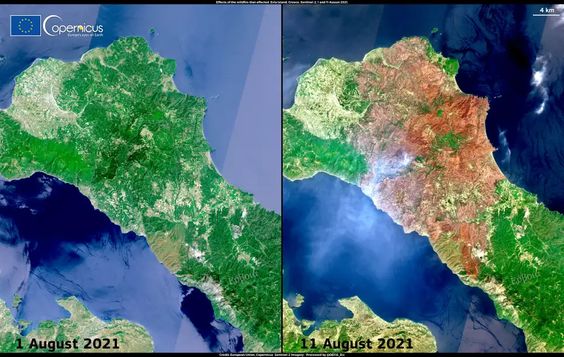 Satellite images of the Greek island of Evia reveal in stark relief the devastation wrought by climate change-fueled wildfires that have ripped through the Mediterranian in recent days, leaving behind hundreds of thousands of acres of decimated forests and communities forced to rebuild their lives in a warming world.

The images of Evia, Greece’s second-largest island and the worst-hit by wildfires, were captured by the European Union’s Copernicus Sentinel-2 satellite on August 1, before the wildfires began, and on August 11. Over that 10-day period, thousands evacuated the island while countless others reportedly remained to fight the infernos. Side-by-side, the images provide yet another wake-up call reminding us that the climate crisis is not a future problem, but a current and ongoing disaster.

As of Thursday, firefighters in Greece had begun to contain the country’s wildfires, as thunderstorms doused the region. However, as EuroNews reports, strong winds are expected this weekend, which may reintensify blazes in the country, which has lost 100,874 hectares of forest and olive farms, according to the European Forest Fire Information System. Unnumbered homes and businesses also vanished in the flames.

The recent wildfires and heat waves in Europe are among a seemingly neverending series of examples of the toll the climate crisis will take on humanity and Earth’s ecosystems if we fail to curb emissions. The calamities that are already here include ongoing megadrought and wildfires in the western United States, deadly floods in Germany, wildfires in Siberia, and historic ice loss in Greenland—the list goes on and on.

These disasters will only become more frequent and intense, with some of the effects of climate change already locked in, according to a major report the Intergovernmental Panel on Climate Change (IPCC) issued Monday. Failure to drastically and immediately reduce our consumption of oil and output of greenhouse gasses will only accelerate and intensify climate change, and thus the destruction of a habitable planet.

“It is still possible to forestall many of the most dire impacts, but it really requires unprecedented transformational change—the rapid and immediate reduction of greenhouse gases,” Ko Barrett, vice-chair of the IPCC, told reporters ahead of this week’s report.

At a press conference on Thursday, Greece’s prime minister, Kyriakos Mitsotakis, echoed the IPCC’s warnings. “The climate crisis—I’d like to use this term, and not climate change— the climate crisis is here, and it shows us everything needs to change,” he said while promising to enact “bold changes.”

“This is a common crisis for all of us.”

Clarification: The 127 degree Fahrenheit (53 degrees Celsius) heat recorded in Turkey is a reading of ground temperature, which is separate from more commonly cited air temperatures. We’ve updated the piece to specify that difference.