“Palm oil is here to stay,” reads the 2018 report “Oil Palm and Biodiversity,” which was produced by the International Union for Conservation of Nature (IUCN) and represents one of the most recent and comprehensive efforts to understand the growing impact of the palm oil industry on the world’s biodiversity.

As of 2018, the annual global demand for palm oil sits at 165 million metric tons, which is expected to nearly double to 310 million metric tons by 2050 if current trends continue. The problem, especially in Southeast Asian countries like Malaysia and Indonesia — which together produce some 85 percent of global supply — is that the rapid expansion of plantations to meet the world’s appetite for palm oil has come at the expense of rainforests. 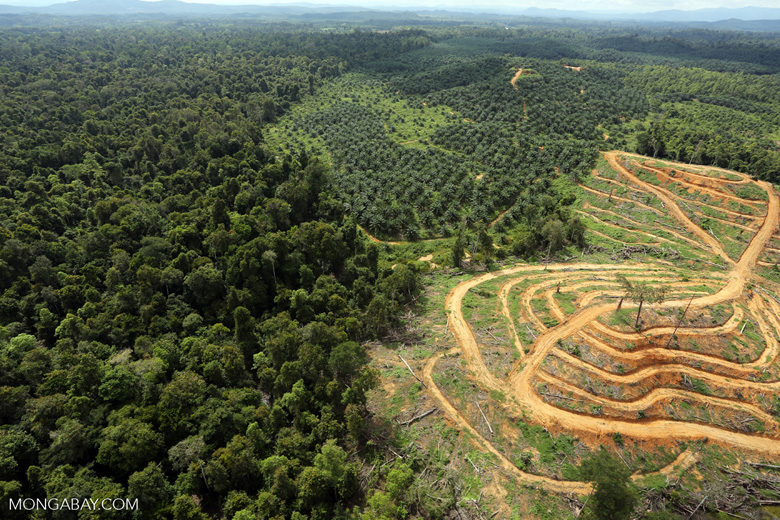 The level of concern is such that, in March this year, the European Commission (EC) declared it will be phasing out palm oil biofuel by 2030. The European Union (EU) currently uses 46 percent of palm oil imports for biofuel production, and EC officials were quick to note that palm oil biofuel will not be completely banned under the new mandate; it just won’t be considered a renewable fuel or eligible for subsidies. This decision is part of the EU’s battle plan against global warming, which aims to reduce emissions by at least 40 percent over 1990 levels by 2030.

Norway has gone further, becoming the first country to ban palm oil that causes deforestation when its parliament voted in January to halt the import of palm oil-based biofuels that could not be proved to have been produced sustainably.

In light of deforestation concerns, top palm oil producer Indonesia has imposed restrictions on the industry in the country, including a three-year freeze on issuing permits for new oil palm plantations. Malaysia is eyeing its own reforms, declaring in March that it plans to cap cultivated land at 6 million hectares (15 million acres) and halt further plantation expansion. Hindered by these restrictions, palm oil producers are looking farther afield to West and Central Africa, and Latin America, where conditions are conducive to oil palm cultivation and land is easier to come by.

But researchers and conservationists worry that the problems that led to the industry being squeezed out of Southeast Asia are simply shifting to a new stage. 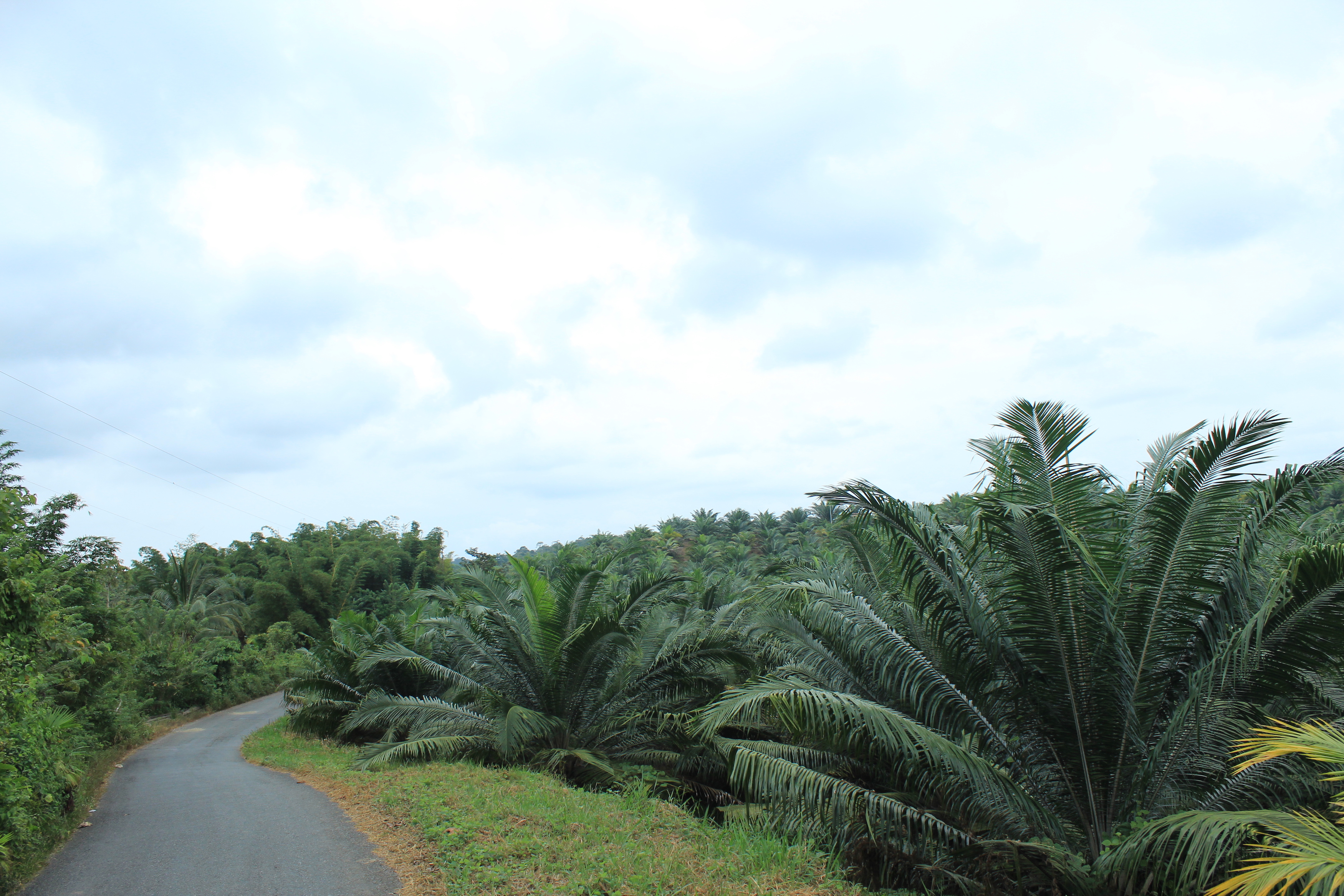 Peru, while not yet counted among the main global producers and exporters of palm oil, is also experiencing the impacts of the industry. According to the IUCN, more than 40 percent of Peru’s oil palm plantations have expanded into natural forests.

“With the exception of Colombia, Latin America has not been an important player in the global market, but there has been a global shift to expand the market to new regions because Southeast Asia seems to be running out of land,” said Juan Luis Dammert, regional director of Peru’s Natural Resource Governance Institute (NRGI). “[Latin America] is a candidate because it has tropical areas that fulfill the biophysical requirements for expansion. Political factors and market opportunities will decide if this expansion will go ahead.”

Colombia is set to produce 1.68 million metric tons of palm oil in 2019, up more than 3 percent from last year. Colombia’s National Federation of Palm Oil Cultivators (Fedepalma) insists that Colombian crops are only grown on degraded land and that they have no intention of expanding into natural ecosystems, much less in the Amazon. Colombian biologist Natalia Ocampo has studied the effect of oil palm crops on birds in both Borneo and Colombia, and says that while the impacts of palm oil in Latin America cannot be generalized, plantations in Colombia have had less of an environmental impact than plantations in other countries, such as Peru and Honduras. 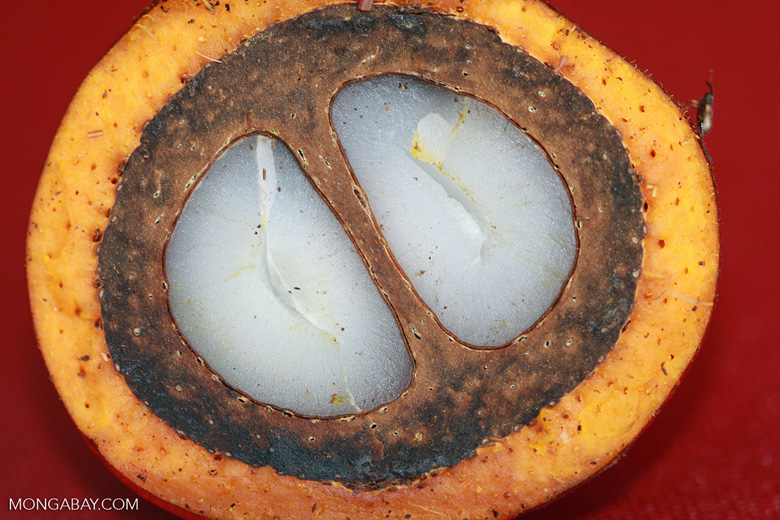 “Oil palm should not expand at the expense of natural ecosystems,” Ocampo said. “There are models which show that there is enough degraded land to cultivate it and comply with international demand. Palm oil should be zero-deforestation.”

In Ecuador, palm oil production is growing at a quick pace, with a jump of 8.6 percent between 2018 and 2019. However, the country is feeling the growing pains, with allegations of human rights violations and habitat loss associated with expanding plantations.

According to Nathalia Bonilla, an environmental engineer and coordinator with the NGO Ecological Action in Ecuador, lobbying for the industry is “so intense that the National Assembly is about to pass a law dedicated to promoting oil palm cultivation. The law focuses only on encouraging it, ignoring the impact that the crop has on communities; such as the violation of environmental, territorial and human rights that this activity generates.”

Ecuador is home to the Tumbes-Chocó-Magdalena biodiversity hotspot, a ribbon of unique, restricted forest that runs down the Pacific coasts of Colombia and Ecuador. But the region is highly threatened by agriculture.

“In Esmeraldas [palm oil expansion] is very worrying, because there is only 5 percent of the native biogeographical Chocó forest remaining,” Bonilla said.

In addition to deforestation, Bonilla and others claim, palm oil is leading to displacement — particularly of the Afro-Ecuadoran communities of Esmeraldas province. Descended from enslaved people who fled into the forest to escape their captors, many Afro-Ecuadorans lack the land rights necessary to keep palm oil companies from seizing the land they’ve lived on for generations.

“There has been discussion of certain laws that prevent Afro-descendent populations from legalizing their territory, while other laws are being passed that enable private companies to acquire and privatize ancestral lands,” Bonilla said. 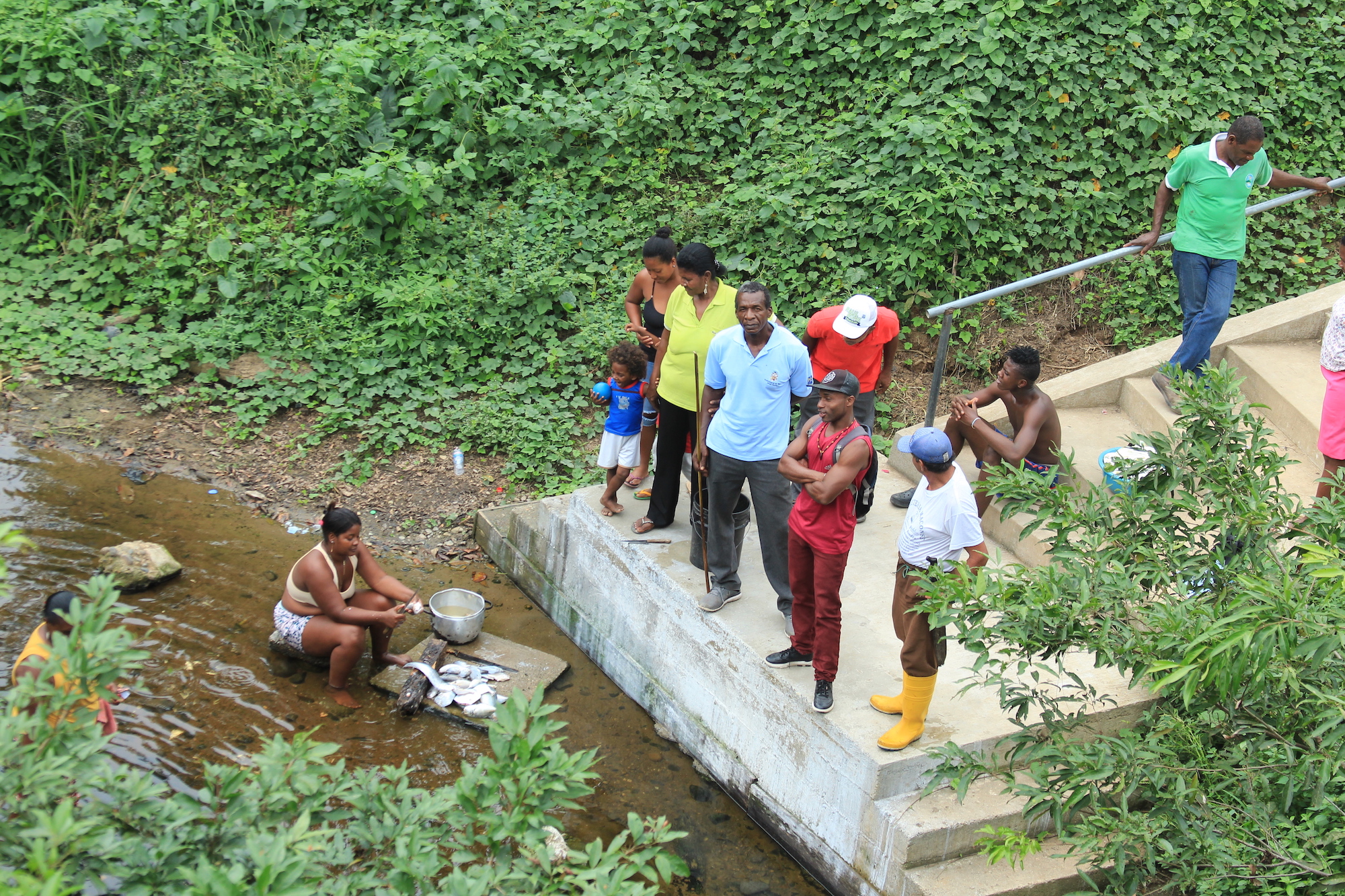 Access to clean water has become a serious problem for the inhabitants of La Chiquita in Ecuador. Image by David Silva.

“The number one problem is the dispute for land, which in some cases reaches dramatic proportions, like in Honduras, where oil palm is expanding into areas linked to drug trafficking,” Dammert said. “This is also a problem in Colombia, where there have been a series of massacres and links to the internal armed conflict in which palm oil emerges as a component in this dispute for land.”

Then there are the claims of soil and water pollution at the hands of oil palm growers. “Pollutants are dumped straight into rivers,” Bonilla said, “and when communities report this to the environmental authorities there is no response.”

Dammert said that to ensure they don’t pollute, palm oil operations must invest in processes and equipment that don’t leach inputs and by-products into the environment. But not all have the interest or resources to do so.

“Unfortunately, there is quite a tendency for smaller and medium-sized companies to not have such clean operations,” Dammert said. “The use of pesticides and fertilizers is also a factor.”

Ocampo, the biologist, says there is enough degraded land in the region for oil palm plantations. But forested land is cheaper to acquire than land that is already cleared and owned by someone else.

“Many of the degraded areas already have owners and have been divided into lots,” Ocampo said. “They are more difficult and costly to acquire. If you buy forested land, you can buy a much bigger area. Unfortunately, it is easier to cut the forest down, sell the wood, and then plant oil palm there.”

In the village of Rubiales in Colombia, the macaws, tapirs and deer that used to be seen among crops of sugarcane, yucca, banana and fruit trees have disappeared. Already the site for the extraction of another type of oil, with thousands of barrels of crude pumped from the earth daily, the region’s limited remaining rainforests are being encroached on by expanding oil palm plantations.

In Mexico, the government has announced its intention to plant 100,000 more hectares (247,000 acres) of oil palm in the state of Campeche, which has designated half of its territory for environmental conservation. In Ecuador, a court in 2017 ordered two palm-growing companies and the state to pay reparations for social and environmental impacts caused by the industry in and around the community of San Lorenzo. However, in the two years since the ruling, those affected are still waiting for things to change.

In Honduras, oil palm has taken over between 20 and 30 percent of Punta Izopo and Jeanette Kawas national parks. Further damage was done to the parks’ remaining primary forest when large fires broke out in September and burned into October, which state officials attributed to logging and agriculture. The fires in Punta Izopo consumed around 400 hectares (990 acres), according to satellite imagery from Planet Labs and tree cover loss data from the University of Maryland, and started near oil palm plantations that are proliferating within the park. 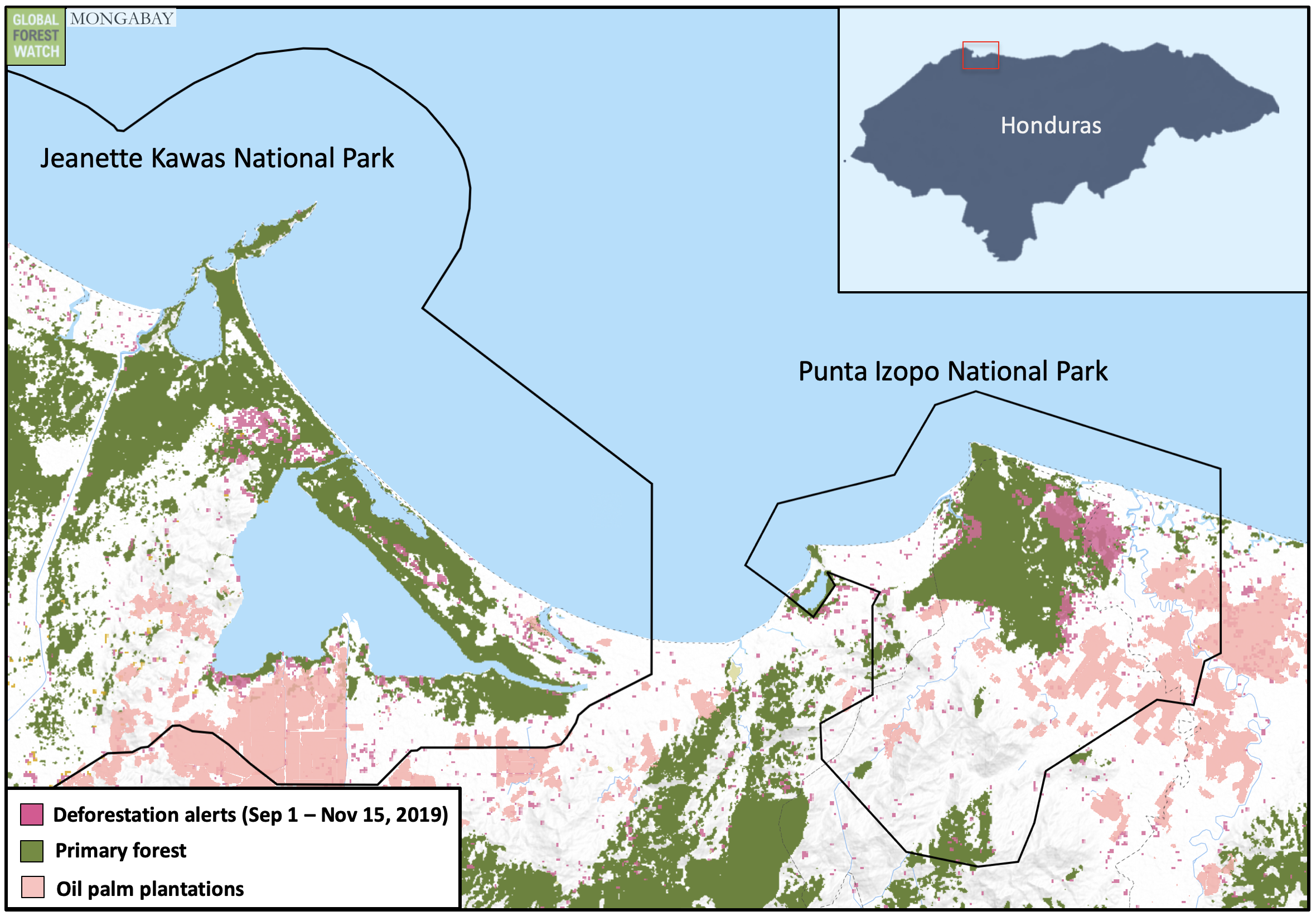 Satellite data show large areas of fire-caused deforestation in and near primary forest in Jeanette Kawas and Punta Izopo national parks in September and October. Officials say these fires were most likely set to clear land for agriculture. In Punta Izopo, the only crop near the fires are oil palm plantations. Source: GLAD/UMD, accessed through Global Forest Watch.

As the industry expands in Latin America, conservationists, government officials and industry stakeholders alike are quickly trying to figure out a way to safeguard the environment and implement lessons learned from palm oil’s legacy in Southeast Asia. Perhaps surprisingly, most do not favor an outright ban on oil palm.

“Given [the fact that] other oil crops require up to nine times as much land to produce than palm oil, its replacement would significantly increase the total land area used for vegetable oil production to meet global demand,” the IUCN report says.

For example, it takes about a fifth of a hectare of land (about half an acre) to produce a metric ton of palm oil. To get the same amount of canola oil requires 1.25 hectares (3 acres), sunflower oil 1.43 hectares (3.5 acres), and soybean oil 2 hectares (5 acres).

“If [palm oil cultivation] is replaced by much larger areas of rapeseed, soy or sunflower fields, different natural ecosystems and species may suffer,” said Erik Meijaard, the main author of the report and president of the IUCN Oil Palm Task Force. “To put a stop to the destruction we must work towards deforestation-free palm oil, and make sure all attempts to limit palm oil use are informed by solid scientific understanding of the consequences.” 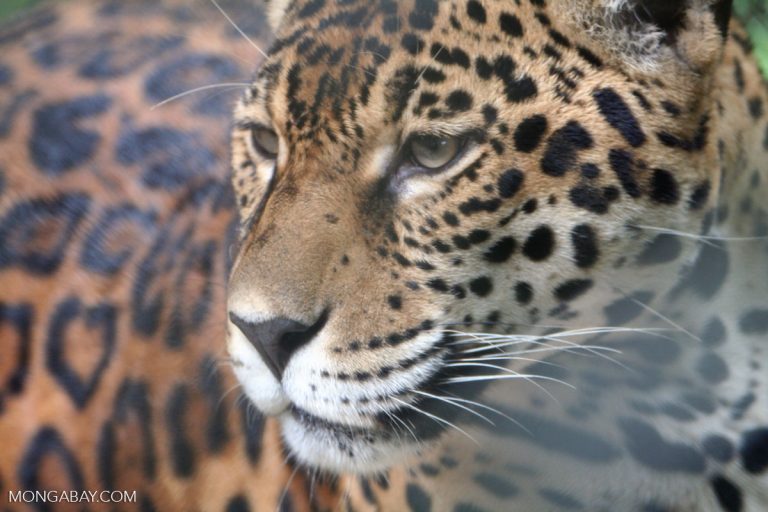 Oil palm plantations do not provide adequate habitat for animals that evolved to live in forests. Photo by Rhett Butler/Mongabay.

Ocampo says that the first thing that needs to be done is an environmental study to determine what is growing in an area before planting oil palm.

“This is not currently a requirement [in Colombia], but it should be,” Ocampo said. “A baseline study should be done to see what species there are and what state the ecosystem is in, what it looks like from a satellite and what kind of forests there are. Most importantly, expansion should be carried out in a responsible way, respecting the remnants of surviving ecosystems.”

For Dammert, governments need to be clear about how much they are going support and regulate the expansion of palm oil.

“The worst-case scenario would be if a decision was made, from a political point of view, for large-scale development of the crop in the region, especially in the Amazon,” he said. “It is better to develop a strong regulatory environment, with a strong state presence, before promoting the crop on a large scale. We have already seen what has happened in Indonesia and Malaysia.”

This is a translated and adapted version of a story that was produced by Mongabay Latam and first published on October 10, 2019.