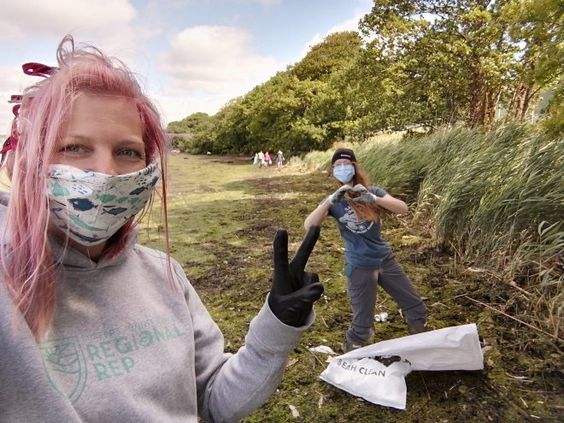 This report details the investigation carried out by Surfers Against Sewage (SAS) Reps, Katrina Ayling (author) and Mairin Williams, into the plastic pollution at Chessel Bay nature reserve Southampton, the subsequent investigation at three plastic factories located near the bay, how this was evidenced and reported to the authorities. It will also detail the subsequent actions taken by the authorities and the plan to tackle the problem in the long term.

Southampton is a city located in Hampshire on the south coast of England, only 70 miles from London.  The city is known as the ‘Gateway to The Ocean’, located at the northern most point of Southampton water, at the confluence of the River Itchen and River Test with the River Hamble joining at the South, water truly runs through the entire city.

Designated Southampton City’s first Local Nature Reserve in 1989; a statutory designation under Section 21 of the National Parks and Access to the Countryside Act 1949, Chessel Bay is of national importance, the mudflats form part of the Lee-on-Solent to Itchen estuary Site of Special Scientific Interest (SSSI). It is also part of the Southampton Water and the Solent Marshes; whose area constitutes a SPA — a Special Protection Area protected under European legislation.  Chessel Bay is the last undeveloped stretch of shore on the lower tidal part of the River Itchen and because of this is a site of ecological importance to the city.

The nature reserve is owned and managed by Southampton City Council and Natural England.  The local ‘Friends of Chessel Bay’ group run by a member of the public do two clean up’s a year in the Spring and the Autumn in between migratory birds and nesting seasons.  At the time of writing this report no other clean ups are sanctioned by the Council ecology team, to not disrupt the wildlife.

Due to the natural geography of Chessel Bay it is a collection point for floating debris in the river and reed beds that are dotted along the shore.

The sources of the plastic pollution at Chessel are numerous and include:

The focus of this report and investigation is the nurdles contaminating the shore and the subsequent assessment of nurdle loss from the factories located near the bay.

All plastic products start life as plastic pellets known as nurdles.  Plastic is made up of several chemicals including by-products from the fossil fuel industry and various additives that change the properties of the final product.  These additives leach out of the nurdles into the sea water causing toxin levels to increase.

When nurdles are lost into the sea they attract Persistent Organic Pollutants (POPs) such as polychlorinated biphenyls (PCBs) and DDTs. Although the use of these chemicals was banned up to 30 years ago because they are harmful to human health and environment, they persist in the ocean.  Studies have shown that nurdles can concentrate that POPs millions of times higher than background levels. Biofilms also form on the surface of the plastic which can harbour pathogenic microorganisms such as Escherichia coli (E.coli).

Every week until March 2020

During the last week of the RTO campaign a specific mini campaign was run on Twitter focusing on the British Plastic Federation, asking them to update and make Operation Clean Sweep mandatory.   As the week went on the photos shared on Twitter went from the nurdles contaminating the bay to revealing the photographs taken from outside the factories showing the pellet loss from these sites.  This told the story of the investigation and pollution incident.  At the end of the week the local newspaper The Daily Echo ran a story on the investigation, interviewing the Reps, Katrina Ayling and Mairin Williams, as well as SAS CEO Hugo Tagholm.

Once COVID 19 restrictions eased the case was picked back up and the site assessed on the 22nd June, with another report being submitted to the EA.  Despite the site having a major clean up in March prior to lockdown the levels of plastic pollution were back up to pre- clean up levels of contamination.

A few days later EA Officers had visited the nature reserve and all three plastic facilities located near to the bay and an investigation was ongoing. In subsequent weeks the momentum for the case has picked up.  The lead officer that has taken on the case emailed all relevant parties and has started the work to form a coalition to tackle the issues at the bay.

In July the SAS Reps were joined by volunteers to assist Nurdle Coasts, a not for profit organisation that specialises in the clean-up of microplastics, in carrying out an impact survey with a view to potentially using the ‘Nurdle Hoover’ to clean up the site.  A full impact and biodiversity survey was carried out of the shore by using quadrant squares and close inspection of the nurdle deposits.  Sadly, very little life was found on the shore, only a few small sand hoppers were found.  The plastics are smothering the plant life making it very difficult for them to grow and creating areas which could only be described as plastic deserts.  A swan’s nest was found on the shore on top of a nurdle deposit, the swans had woven plastic wrappers in amongst the twigs and branches that made their nest.  The plans for the clean-up are being made and Nurdle Coasts have submitted their impact report to the EA.

The investigation wasn’t without it up’s and downs and being exposed to that level of pollution and natural disaster is something that takes a lot of processing and it is impossible not to have an emotional response when faced with such destruction.

To get the resources at the EA focused towards the pollution incident enough intelligence needs to be logged against the site on their systems.  To do that, weekly visits were conducted and after the incident was logged all photographs were sent to the office dealing with the case.

Working with other organisations such as FIDRA was a huge support as they are specialist in nurdles and pollution caused by them.  They could supply reps with documents and information required to understand what has happened and discuss legislation.  The same goes for the work with Nurdle Coasts who will bring their specialist knowledge on how to clean up the nurdle contamination smothering the shore.

As an ex enforcement office Katrina understood what is required to build a good case and body of evidence.  The photographs and video’s taken were taken in accordance to evidencing techniques she learnt during her time in enforcement and all information collated and submitted to the EA was in a format that could be used.  If this was to be replicated for other reps to copy the main piece of advice would be STICK TO THE FACTS.  Records the what’s, where’s, how’s and when.  Never assume or accuse, only present the facts.  It is also important to be consistent in the visits and ensure that every visit is logged as a separate incident with the EA to ensure that the intelligence builds against that site.

Team work, both on the ground, with other organisations and with the support of SAS HQ.  Just being able to talk the case through with others who have an interest helps with the progress and ensure that you are not alone with dealing with it.  As with this case there were two reps involved and it is important for each rep to find their role aligned to their strengths.  Mairin has the relationships with the local community group and council ecology team so took on a lot of the liaising with them and Katrina did the evidence building, reporting and discussions with the enforcement officers.  Setting out clearly defined roles and allocating tasks is crucial to ensure that the case moves along and no work is duplicated therefore making the most of resources.  Regular catch up meetings either in person or over zoom are a great way to keep updated on how the case is going.

One thing to remember that building a case takes A LOT of hard work, it is not easy and takes dedication, time and effort.  However, when the case finally gets going and the relevant parties are involved and things start happening it is incredibly satisfying.  It’s not for the faint hearted, but if you are determined, disciplined and passionate enough then anyone can take on this sort of work and be a public informer to the enforcement agencies.