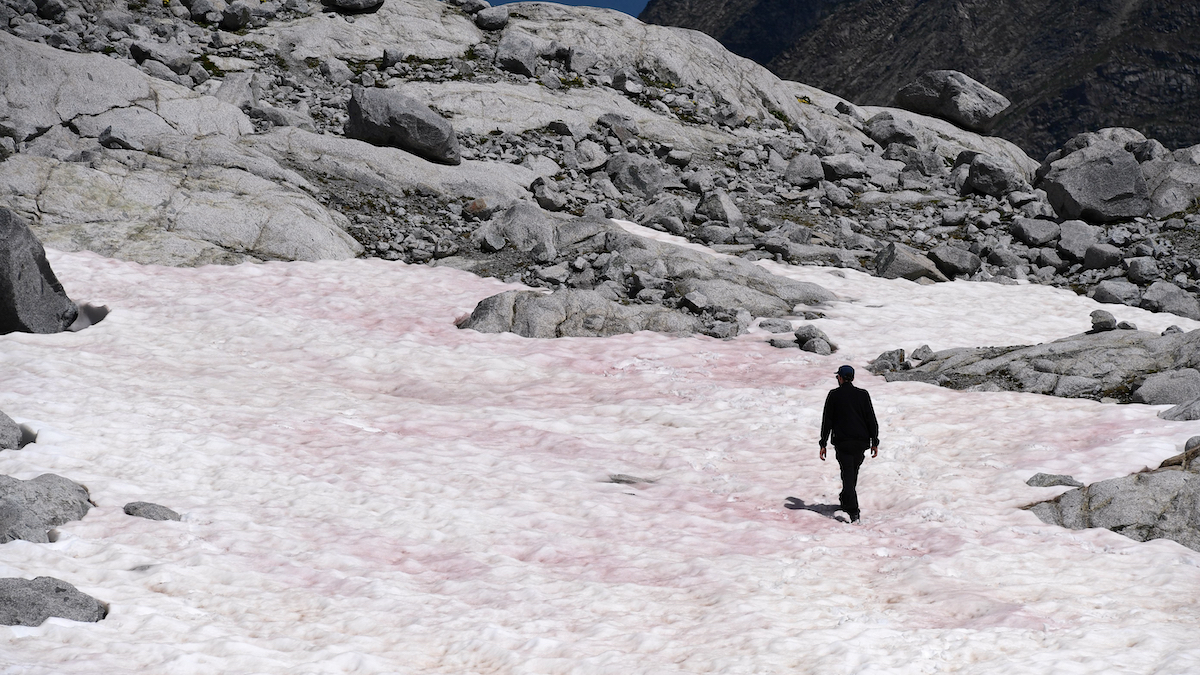 A man walks on pink snow at the Presena glacier near Pellizzano, Italy on July 4, 2020. MIGUEL MEDINA / AFP via Getty Images

In a troubling sign for the future of the Italian Alps, the snow and ice in a glacier is turning pink due to the growth of snow-melting algae, according to scientists studying the pink ice phenomenon, as CNN reported.

The algae will make the snow melt faster. The salmon-hue that has tinged the snow is from algae that carry carotenoid pigment, which reflects the distinctive color. While most algae thrive in warm freshwaters, these are known as cryophilic, meaning they thrive in colder temperatures, where they create the "watermelon snow" effect, according to Salon.

The concern is that the algal bloom on the snow will accelerate the effects of the climate crisis. As Agence France-Presse (AFP) reported the plant, known as Ancylonema nordenskioeldii, is often found in Greenland's so-called Dark Zone, where the ice is also melting.

Normally ice reflects more than 80 percent of the sun's radiation back into the atmosphere, but as algae appear, they darken the ice so that it absorbs the heat and melts more quickly, according to AFP.

"Everything that darkens the snow causes it to melt because it accelerates the absorption of radiation," said Biagio Di Mauro of Italy's National Research Council to AFP. "We are trying to quantify the effect of other phenomena besides the human one on the overheating of the Earth." He noted that the presence of tourists could also have an effect in weakening the snow.

Di Mauro told CNN that the spring and summer had very little snowfall high in the Alps, which has seen higher than average temperatures. "This creates the perfect environment for the algae to grow," he added.

Di Mauro emphasized that the algal bloom is particularly bad news for the glaciers, which may see a rapid melting. That would be in line with glaciers around the world that are starting to fade away as global heating continues to push up atmospheric temperatures.

"A classic reminder of how uncertainty is not our friend," said Dr. Michael E. Mann, a distinguished professor of atmospheric science at Penn State University, to Salon by email. "In this case, we're seeing an amplifying feedback wherein biological darkening (due to Algae growing on the surface of melting ice), leads to more solar absorption by the ice and even faster melting. We call this a 'positive feedback' but it is anything but positive. It reflects a process which is leading to faster melting of the glaciers than our simple models predict."

As CNN noted, Di Mauro has come across cold temperature algae before. He has previously studied the Morteratsch glacier in Switzerland, where an algae called Ancylonema nordenskioeldii has turned the ice purple.

Ken Caldeira, an atmospheric scientist at the Carnegie Institution for Science's Department of Global Ecology, told Salon that "photosynthetic organisms are designed to absorb sunlight. Some small fraction of the energy in sunlight goes into making carbohydrates but most of it goes into heating the organism and its local environment. If that organism is living in snow, the snow is likely to melt."

This algae has also been found in southwestern Greenland as well in as the Andes and Himalayas. Globally, glaciers are melting. A March study found an Antarctic glacier had retreated three miles and can cause five feet of sea level rise if it melts completely. A 2019 study found that Himalayan glacier melt has doubled since 2000. Additionally, conservationists and scientists have held funerals for glaciers in Iceland and the Swiss Alps.