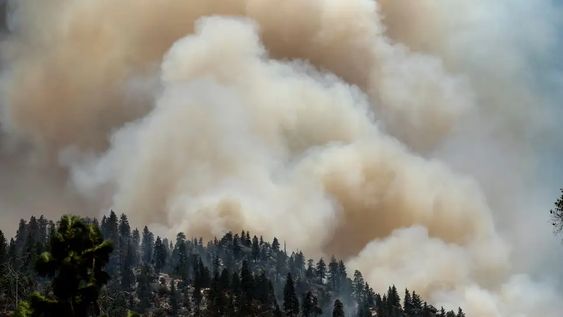 Aside from climate change and drought, the most famous culprit of California’s wildfires is likely Pacific Gas and Electric (PG&E), which admitted this week that its equipment at least partly sparked the still-raging Dixie Fire, which has now burned over 103,900 acres. Finally, the company has decided to bury 10,000 miles of cable lines: a long-delayed cost-benefit analysis of mitigating climate-related disasters.

The Wall Street Journal reported that PG&E’s equipment has started over 1,500 fires in California from 2014 to 2017 alone—most horrendous was the Camp Fire, for which the company pled guilty to 84 counts of involuntary manslaughter and paid out $13.5 billion in a settlement to victims.

10,000 miles represents only about 10 percent of its lines, the AP reports, and PG&E estimates the endeavor to cost between $15 and $30 billion. In the harshest corporate light, it seems like a prudent investment. After the Camp Fire settlement, the company filed for bankruptcy and emerged last year $38 billion in debt.

The project likely won’t get done nearly quickly enough to eliminate (at least a portion of) power line-related hazards. The Post reported that PG&E COO Adam Wright said he expects the company to bury 1,000 miles of line per year, up from its current rate of 70 miles per year.
The company’s existing lines would need a cash injection, anyway, if PG&E were to make them safe. In the Camp Fire case, a grand jury found that the company showed “a callous disregard” for life after failing time and again to follow state protocols, check old lines, and replace shoddy equipment. According to the Washington Post, PG&E CEO Patricia Poppe said in a press conference that “It’s too expensive not to do it. Lives are on the line.”
In a press release, the company said that burying lines would also reduce power shutoffs necessary under particularly dry high-risk conditions. Shutoffs have affected millions of California residents, forcing hospitals to make dire choices about where to divvy up limited generator power needed for surgery, fridges full of medicine, ventilators, electronic records, etc.
While PG&E’s incessant disaster-causing negligence is glaringly obvious and can be directly mitigated with a chunk of money, other corporations contributing to extreme weather events will be able to get along at a distance. As the NRDC has pointed out, we can blame greenhouse gas emissions (and contingent drought) not only fossil fuel companies but big toilet paper and the food and beverage industry. But investments almost always come after a disaster and PR catastrophe, rather than before it’s too late.
Whitney Campbell, July 2021
https://gizmodo.com/notorious-wildfire-causing-power-company-pg-e-to-finall-1847345867?utm_source=gizmodo_newsletter&utm_medium=email&utm_campaign=2021-07-23
Use left/right arrows to navigate the slideshow or swipe left/right if using a mobile device