Next Up: The Climate Emergency 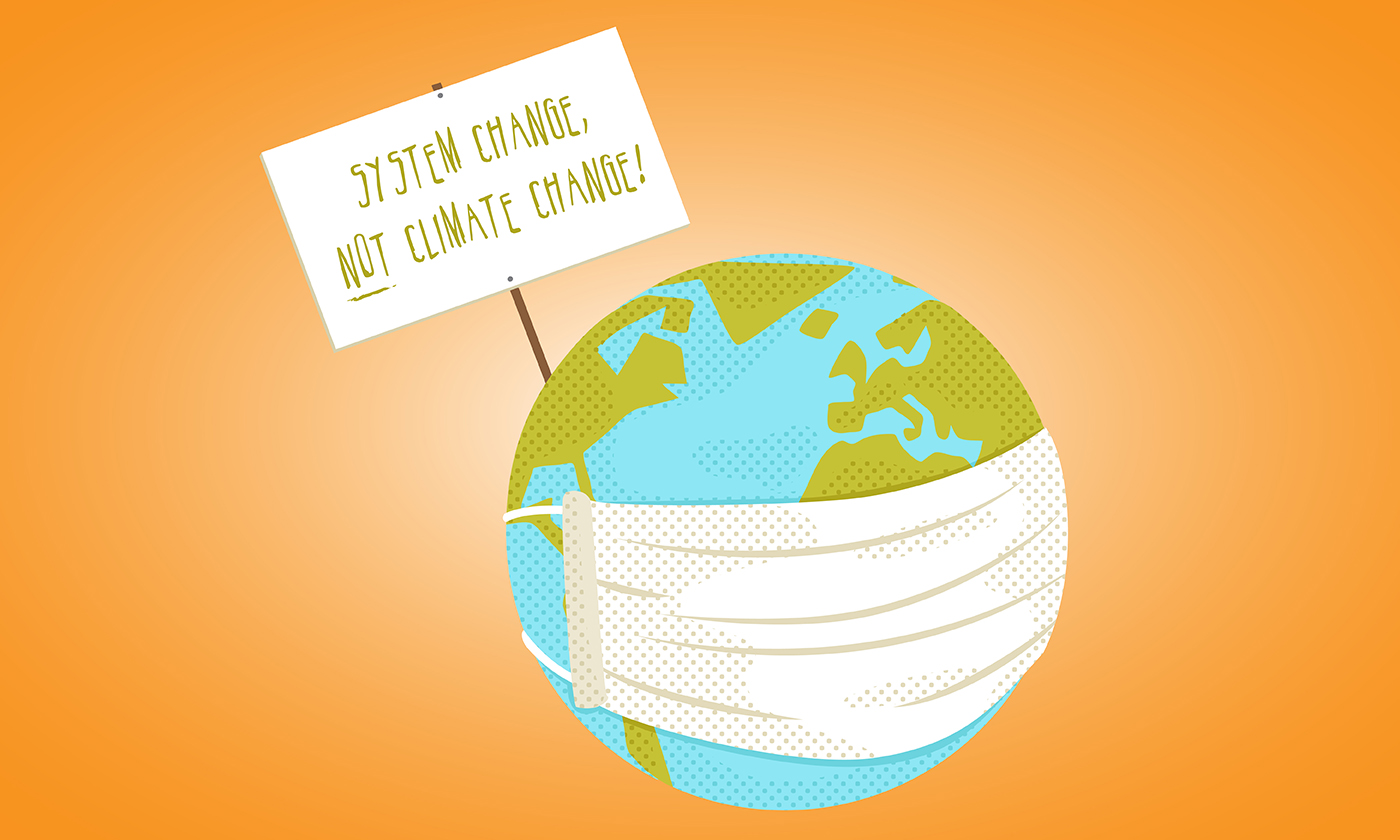 My new book went to press just as the coronavirus pandemic was starting. If I were still working on The Green New Deal and Beyond: Ending the Climate Emergency While We Still Can, I’d add a preface discussing the pandemic’s relevance to the climate emergency. We Americans have learned that we do have the capacity to take unprecedented, radical actions that deal with a fast-breaking existential threat like the coronavirus. I’d write that we must be willing to take just-as-drastic actions against our less visible degradation of the global climate.

Because the accumulation of carbon dioxide in the atmosphere is a slow-rolling catastrophe as compared with the spread of coronavirus, we have been lulled into climate complacency for decades. We have waited so long to act that the global economic emergency now requires an immediate, swift, and radical response.

Necessarily bold climate action has long been rejected as too economically disruptive. Now we can see that when our national predicament is dire enough, we have no choice but to set aside the pursuit of profit and growth and deal with the disaster at hand. The climate emergency is just that dire and immediate. Fortunately, policies deemed radical just months ago will have a much better chance of getting traction as soon as we get through the COVID-19 crisis.

The first, most crucial action will be to impose an impervious cap on the total quantity of fossil fuels extracted and allowed into the economy. It would really be three caps—one each on oil, gas, and coal—that ratchet downward year by year until we are completely liberated from fossil fuels, on schedule.

For the sake of argument, let’s say we base our rate of fossil-fuel phaseout on the 2019 United Nations’ Emissions Gap Report, which calls for an annual greenhouse emissions reduction of 7-8% worldwide if we are to avoid catastrophic warming. Each year, we would reduce fossil fuel supplies by 7%, thereby reaching zero fossil fuel in about 15 years. The government would enforce the cap through a system of non-tradable permits. No company or individual could pull any amount of fuel out of the ground without handing over the permits to cover that amount.

The buildup of wind, solar, and other non-fossil energy capacity won’t be able to proceed fast enough during that time to compensate for the huge quantities of dirty energy being taken off-line. The result will be a smaller, less flexible energy supply, and that will have far-reaching consequences that require a deep overhaul of our economy and society.

Our responses to the current pandemic, most prominently the business closures and stay-at-home orders, have caused widespread economic disruption. Congress has been forced to scramble in response, with still-unpredictable results. But with an intentional phaseout of fossil fuels, there will be more time to ensure economic security for all households and greater equality for society as the flow of energy into the economy is restricted. In The Green New Deal and Beyond, I discuss policies for achieving economic sufficiency and justice, such as planned allocation of resources and production, shorter working hours with full pay, and price controls with rationing of essential consumer goods.

What goods and services are essential?

The past few weeks have seen lots of discussion about which kinds of businesses provide essential goods or services and should be exempt from closure orders. We’ve also seen daily news of persistent shortages of goods caused by panic-buying and hoarding.

This discussion should seed a nationwide conversation about how to decide, collectively, which products are essential, which are useful to produce if we have the resources, and which should be declared luxuries.

Having that conversation now will prepare us for the phaseout of fossil fuels. As energy availability is restricted, we cannot leave it to an untethered market to make decisions on what to produce. If we do, we will have big surpluses of profitable goods and deficits of products that are needed daily by every household.

A lower-energy economy will need to produce less overall—still enough essential goods to go around, but deep cuts in production of stuff that contributes little more than profits to the seller and waste to the landfill. And, in contrast with the struggle against coronavirus, those who produce essential goods and provide essential services in the climate struggle will not be asked to risk their lives to do their jobs.

In the event that shortages of essential consumer goods develop, we will need to prevent the kind of panic-buying and hoarding we’re seeing now because of COVID-19. The only remedy for that will be price controls and rationing.

The actions of medical workers to deal with the pandemic have been heroic. But in the response to COVID-19, we are also seeing the power of refraining from actions that would worsen the problem. We’re not traveling. We’re not operating entire sectors of the economy. Ending the climate emergency will likewise require that we as a society not only take action toward a non-fossil energy buildup but also refrain from taking many ecologically insupportable actions, including heavy energy use.

Energy use and environmental justice

With COVID mitigation efforts, we are experiencing some of the restraint that climate mitigation will require of us. Air travel has plummeted to a small fraction of what it was before the pandemic. Even with gasoline well under $2 per gallon, personal vehicles are traveling far fewer miles. Electricity consumption is way down. But COVID is also laying bare the economic and environmental injustice that was already endemic in the United States. For decades, low-income populations and communities of color have lived with more severe air pollution than have affluent populations and white communities. Breathing that bad air rendered them much more vulnerable to the coronavirus, and they are being killed at disproportionately high rates.

Millions are suffering economically, and too often an implicit assumption is that solving that terrible problem requires a return to profligate resource consumption and greenhouse emissions. In fact, such a return to business-as-usual would mean a return to economic misery for much of America. The pandemic has shone a light on our dire need for a federal jobs guarantee, living wages, and universal basic services, which would ensure access to essential goods and services regardless of income.

Within a matter of weeks, the U.S. economy saw deep cuts in many of the most energy-hungry goods and services. While we are working our way through the current crisis, why not use this time to plan for a more just economy that runs on much less energy while still ensuring sufficiency for all? It’s going to be necessary anyway, so let’s go ahead and get started.

The widely expressed hope that investment in solar and wind technology and green infrastructure will work its way through the market (perhaps with an assist from a carbon tax) to automatically eliminate fossil-fuel use and emissions is not supported by the evidence. Historically and materially, GDP is fed by increased energy input.  In a growing economy, therefore, new sources of energy don’t replace all the old sources but instead add to existing supply.

This has always been the case. The use of coal continued to rise throughout the 20th century as oil became dominant. We kept using more and more oil as natural gas took off in the post-World War II decades. And the burning of oil and gas has continued to increase despite growth in solar and wind generation.

Between 2009 and 2018, during a historically rapid buildup of U.S. wind and solar capacity, only one-fourth of the new output displaced electricity from fossil-fuel power plants; the other three-fourths went into increasing the total supply.

About that war metaphor

The Green New Dealers and others in the climate movement often invoke the memory of World War II in talking about what needs to be done now. When these folks use the war metaphor, they are harking back to the lightning-speed buildup of productive forces in the 1940s to urge a rapid buildup of wind and solar energy capacity and green infrastructure. And in many cases, the reference to war is not metaphorical. Bill McKibben, for example, has written, “It’s not that global warming is like a world war. It is a world war.”)

But the wartime industrial surge is only half of the story. The more important half is that for those four years, the U.S. civilian economy went into emergency mode and became the opposite of its former and future self, with planning of resource use and production, along with restrained but equitable civilian consumption through price controls and rationing.

What we need to do isn’t just a matter of new industrial technology. Only a statutory, declining cap on fossil fuels will reduce emissions to zero. If we’re going to do that, we will need to ensure sufficiency for all, and therefore should pay attention to the lessons of the 1940s civilian economy.

By the way, a similar debate is going on over whether we should be talking about a war against the coronavirus. I don’t think it’s helpful to characterize the public-health and research struggle against the virus as a war, but the transformation of the “civilian” economy looks somewhat like wartime.

“Offsetting” the carbon emissions produced by affluent countries by contributing to “carbon friendly” projects, usually in low-income countries (a scheme often compared with the medieval selling of indulgences to cancel out sin) often has harsh impacts on the landscapes where Indigenous people live. For example, when the international soccer body FIFA wanted to “decarbonize” the 2014 World Cup, they bought into a project aimed at curbing deforestation in the Brazilian state of Rondônia, home to the Paiter-Suruí tribe. Tribe members, appalled at the project’s misspending of funds and failure to stop the logging of their lands, carefully documented everything. By 2018, the Paiter-Suruís’ forest was ravaged, and number of trees cut had exceeded the carbon value of all of the credits that the project had sold.

Affected communities are getting fed up. Youth belonging to the Canada-based network Indigenous Climate Action delivered a letter at CoP 25 in Madrid that read in part, “We have proven our peoples’ expertise and knowledge in developing successful nonmarket solutions that surpass current carbon market mechanisms. For these reasons, our rights are essential to mitigating emissions, protecting critical biodiversity and upholding tenets of climate justice.”

There has long been a debate in climate circles over which scale of action is most important: individual, collective, or governmental. If there is one lesson that people in the United States appear to be learning during the pandemic, it is that if we don’t achieve deep, transformative action at all three scales—if instead we simply depend on market forces—we will face consequences that far, far surpass the devastation and suffering that we have seen so far. It seems entirely possible that a similar realization can now energize the climate struggle, and that gives me hope.