Minecraft Has a New Sustainable City Map to Explore 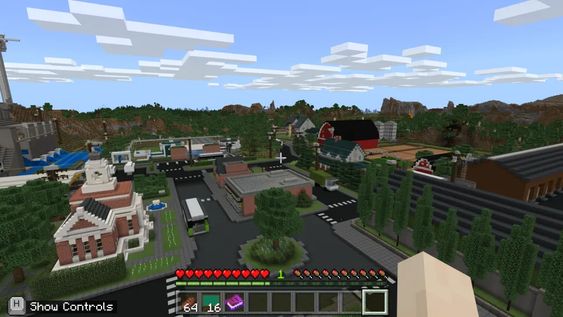 Studios released a free sustainability city map on Thursday that teaches players how to create a sustainable environment in the real world by exploring a virtual one. The focus is on educating students on how things like recycling plants and clean energy work, while being fun and interactive.

The map itself is free for anyone who already owns Minecraft, and there are pre-made lesson plans for teachers who want to take their classes on a virtual tour of a sprawling block city. Both the map and extra lesson plans are geared toward teaching students about several sustainability topics—complete with the ability to explore a hydropower plant, a sustainable home, a forest, farm, and other locations.

“To help you teach students about sustainability, we’ve assembled six new lessons in a brand-new Minecraft: Education Edition world,” the studio wrote in the press release. “These lessons are designed to show sustainable processes at work in our daily lives and illustrate how some of the goals and themes in Microsoft’s Annual Sustainability Report might show up in a Minecraft world.”

Mojang created the map to reflect Microsoft’s sustainability goals, though any mention of Microsoft is absent from the whole experience. While those goals include carbon- and water-negativity by 2030, the company has continued to license it software to oil companies. Nevertheless, the maps still offer an instructive tool to grasp the basics of how society can reduce its footprint on the planet.

The lessons are a great starting point for teachers, providing helpful questions that are echoed throughout different points in the map, like: “How does your food get from the farm to your local store”; and “Where does outflow go once it goes down a drain?” You can actually jump into a kitchen sink and follow the drain down below the surface, or open a metal grate in the middle of the street and climb down into the sewer. Teachers can also tweak the lessons any way they want. 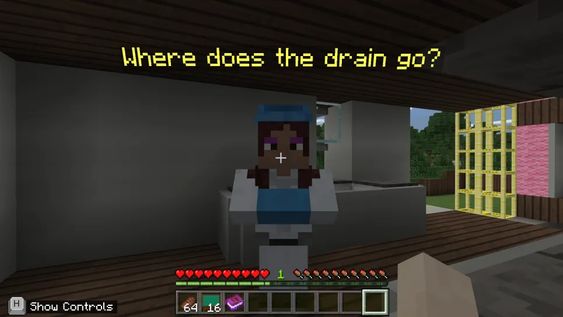 Jump in and find out! Screenshot: Joanna Nelius/Gizmodo

The sustainable food production lesson starts students at the town grocery store. Then it leads them to a farm, a waste facility, and a recycling plant to explore everything that goes into putting food on the kitchen table and how to make that process as environmentally-friendly as possible.

There’s a bus that shuttles you around the city if you don’t want to explore on foot, or you can travel from building top to building top in a minecart if you’d like to see the world from above. The bus will always take you back to the center of town, in between the town hall and grocery store, before you can travel to the next location, but it’s fast.

Every one of the six locations has plenty of NPCs that students can interact with, as well. Once you get close enough, a title will appear above their heads, letting you know what their job title is. Clicking on them will reveal more information about what their job entails and why it’s important. Speaking with one of the irrigation techs on the farm, for instance, students will learn about how modern irrigation equipment can prevent overwatering by monitoring the temperature, soil moisture, leaf wetness, and humidity. 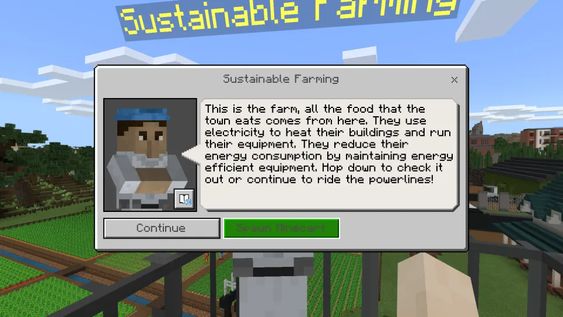 Interested educators can find the new map by launching Minecraft: Education Edition and then clicking on Play > View Library > Biomes and Worlds > Featured Worlds > Sustainability Map > and then Create World to import the map to their computer. From there, they can create their own server and invite students into the world so everyone can explore it together.

Microsoft also released some early findings on its “10-year strategy to become carbon negative, water positive, and zero waste, and develop a planetary computing platform,” according to the press release. To-date, Microsoft said it has procured 1 million metric tons of carbon removal in the form of forest and soil conservation projects (though they don’t always deliver on emissions reductions), funded 20 water replenishment projects, and diverted 60,000 metric tons of waste from landfills. Neither the company nor the Minecraft map detailed what it has done about its contracts with oil companies, though.