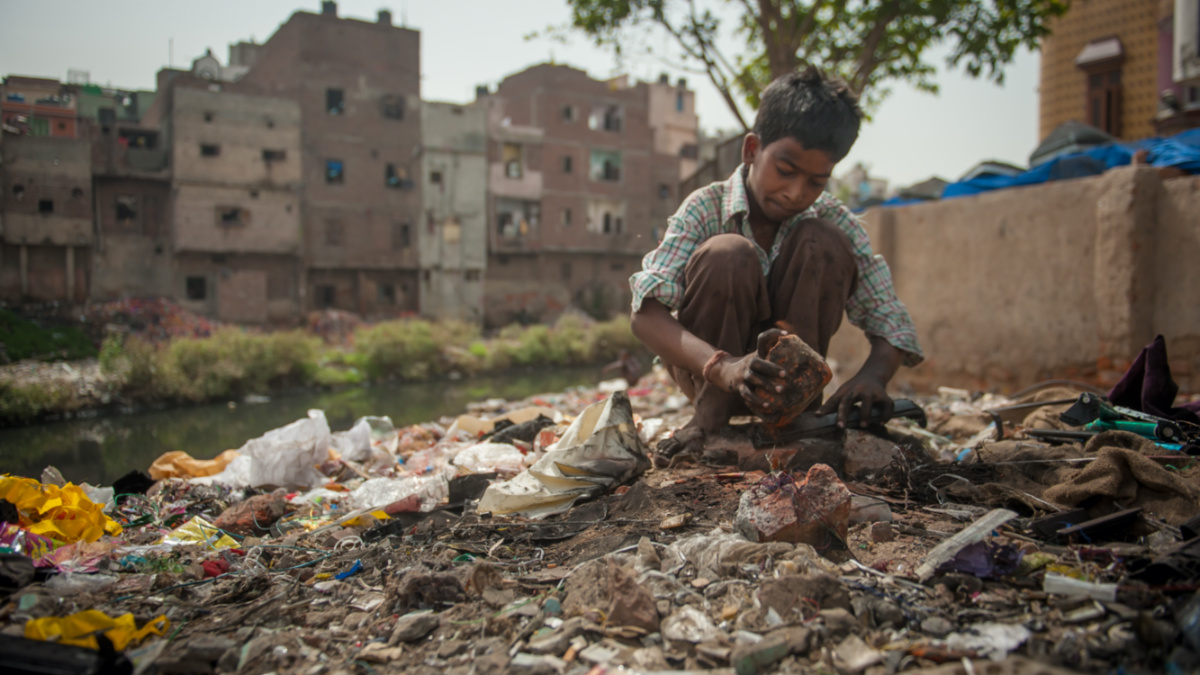 A boy works among India's largest collection of electronic junk, which has been linked to high lead levels, on June 12, 2016 in New Delhi, India. Shams Qari / Barcroft Media / Getty Images

Childhood lead poisoning is a long-recognized health hazard that has severely negative consequences for the developing brain. A new first-of-its-kind study reveals that lead poisoning is a global problem, affecting far more children than previously thought. The researchers estimate that roughly 800 million children worldwide, or one out of three, suffer from lead poisoning, according to The New York Times.

Children with a blood lead level above 5 micrograms per deciliter need immediate treatment to prevent life-long consequences from the powerful neurotoxin. The report, The Toxic Truth: Children's exposure to lead pollution undermines a generation of potential, says that the bulk of affected children live in South Asia. India is one of the worst affected countries, where more than 275 million children have dangerously high lead levels in their blood, the BBC reported.

The study is a collaboration between UNICEF and Pure Earth, a nonprofit that seeks to help poor countries threatened by toxic pollutants.

"With few early symptoms, lead silently wreaks havoc on children's health and development, with possibly fatal consequences," said UNICEF Executive Director Henrietta Fore in a UN statement. "Knowing how widespread lead pollution is – and understanding the destruction it causes to individual lives and communities – must inspire urgent action to protect children once and for all."

Childhood lead exposure has been linked to behavioral problems. It can also eventually lead to kidney damage and cardiovascular conditions, according to Agence-France Presse (AFP). Lead poisoning is estimated to cost low- and middle-income countries almost $1 trillion over children's lifetimes, AFP reported.

The study showed lead poisoning is a major problem in developing South Asian countries since environmental safeguards have not yet been put in place or are poorly enforced. That means that lead in dust and fumes from smelters, fires, car batteries, old peeling paint and water pipes, electronics junkyards, and even cosmetics and lead-infused spices pose an enormous risk to the mental and physical development of a generation of children, The New York Times reported.

"The unequivocal conclusion of this research is that children around the world are being poisoned by lead on a massive and previously unrecognized scale," the study found.

The study also discovered that nearly one million adults die prematurely every year because of lead exposure.

The report's authors say that vehicle batteries are the prime culprit of lead exposure. They based their findings on data from the Institute of Health Metrics and Evaluation (IHME) at the University of Washington, which obtained blood test results from tens of thousands of children around the world, the BBC reported.

"Vehicles in low and middle-income countries have tripled since 2000 and that has led to a graphic rise in lead acid battery recycling, often in an unsafe way," Dr. Nicholas Rees, one of the report's authors, told the BBC.

The BBC reported that about 85 percent of the world's lead goes into producing lead-acid batteries, with the vast majority coming from recycled car batteries.

"As a result, as much as half of the used lead-acid batteries end up in the informal economy," the report found, according to the BBC. "Unregulated and often illegal recycling operations break open battery cases, spilling acid and lead dust onto the ground, and [there is] smelt lead in open-air furnaces that spew toxic fumes and dust that contaminate surrounding neighborhoods."

However, lead poisoning is rare in more developed countries, suggesting that the problem is solvable with decisive action.

"The good news is that lead can be recycled safely without exposing workers, their children and surrounding neighborhoods," said Richard Fuller, president of Pure Earth, the AFP reported. "People can be educated about the dangers of lead and empowered to protect themselves and their children."

He added that the economic and social returns in reducing lead pollution could be enormous.

"Improved health, increased productivity, higher IQs, less violence, and brighter futures for millions of children across the planet," said Fuller, according to the AFP.