It's Not Just Siberia as Record Heat Spreads Across the Arctic

Siberia has been hot and on fire. Perhaps you’ve heard? The relentless heat that’s buffeted the region has decided to expand to other parts of the Arctic, from Norway to Canada, with high-temperature records breaking over the weekend.

A nearly all-encompassing heat wave has spread across the highest reaches of the globe. Weekend temperatures reached 71.4 degrees Fahrenheit (21.9 degrees Celsius) in Eureka, Canada, one of the northernmost settlements on Earth located on Ellesmere Island. Meanwhile, in Longyearbyen, a small town on the northern Norwegian island of Svalbard, it hit 71.1 degrees Fahrenheit (21.7 degrees Celsius) on Saturday. Both are all-time records for the two locations.

In absolute terms, those high temperatures actually sound pretty good, if you live in New York City like me, where the temperature is expected to crank near 100 degrees Fahrenheit (37.8 degrees Celsius) today along with vile levels of humidity. But in the high Arctic, these are absolute freak-show temperatures.

Though there are more northerly settlements in Canada, Eureka is considered the coldest place in the country. The average July high temperature there is only 48.7 degrees Fahrenheit (9.3 degrees Celsius). Longyearbyen is similarly chilly, located on the island where everything from seeds to code are entombed in doomsday vaults tucked into the frozen soil. The 70s just isn’t a thing that happens there.

The Arctic is warming more than twice as fast as the rest of the planet, and this year has certainly driven that point home. Siberia has been the poster child, but the absolutely searing heat has had ripple effects across the Arctic. The monster fires in Siberia have unleashed carbon dioxide that’s further altering the atmosphere and priming the planet for more heat. In addition, the sizzling temperatures have sent sea ice plummeting. 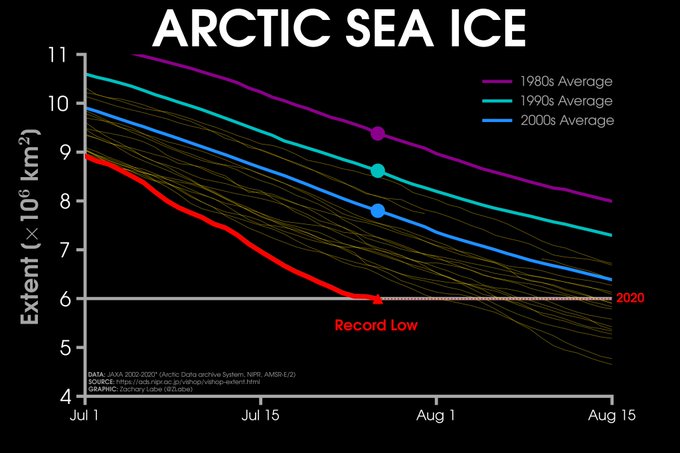 Arctic sea ice as a whole is currently at the lowest mark on record for this time of year. Ice pulled back from the Siberian coast, and ice in the neighboring Kara, Laptev, and East Siberia Seas are all in uncharted territory. The Barents Sea that surrounds Svalbard has seen sea ice completely disappear, something that’s happening with increasing frequency as the planet has heated up. All told, sea ice currently covers 2.3 million square miles (6 million square kilometers) of the Arctic, which was the average minimum in the 2000s. We’re still roughly two months away from hitting the minimum, but 2020 is on track to break the 2012 record for lowest extent.

In recent years, this type of once-bizarre warmth has become all too common. Last year, for example, the Ellesmere Island settlement of Alert (I guess they have a thing for unique place names up there) cracked 70 degrees Fahrenheit (21.1 degrees Celsius) for the first time ever recorded. Alert is, incidentally, Earth’s northernmost settlement. Heat and fires have lit up Scandinavia and Alaska in recent years. Even Greenland, basically an island of ice, hasn’t been immune. The great unraveling in the northern part of the world is proceeding on schedule, if not a bit ahead of.

Heat is expected to remain strong in northern Canada and return in full force to Siberia later this week, so the records are unfortunately nowhere close to over yet