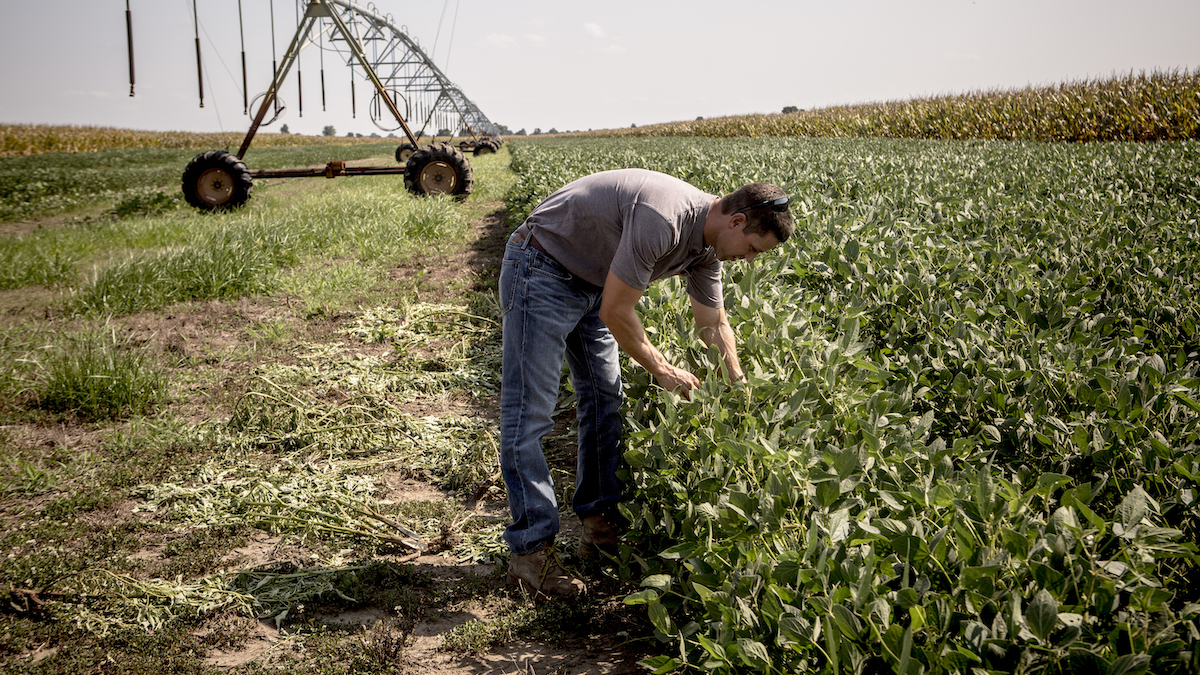 Dicamba is having a devastating impact in Arkansas and neighboring states. A farmer in Mississippi County, Arkansas looks at rows of soybean plants affected by dicamba. The Washington Post / Getty Images

Documents unearthed in a lawsuit brought by a Missouri farmer who claimed that Monsanto and German chemical maker BASF's dicamba herbicide ruined his peach orchard revealed that the two companies knew their new agricultural seed and chemical system would likely damage many U.S. farms, according to documents seen by The Guardian.

The lawsuit, which awarded the Missouri farmer $265 million, showed that Monsanto intentionally hid the risks involved in its plans and calculated how to profit off farmers worried about damage to their crops. The documents also show Monsanto's efforts to stymie tests from third-party labs to make sure there was no data that concerned regulators.

In fact, The Guardian reports that some employees joked about sharing "voodoo science" and hoping that they stay "out of jail."

The issue revealed by the documents was about dicamba and a new crop system from the two companies that addressed farmers' growing concerns that weeds resistant to Monsanto's glyphosate weed-killer, Roundup, were taking over croplands.

The documents, which date back to 2009, show that Monsanto and BASF, despite assuring regulators that their system would prevent drift to neighboring farms, were aware that their system could have catastrophic consequences, as The Guardian reported. It seems the companies were aware that farmers would likely use older versions of dicamba, which easily turns into vapor and carries away to neighboring farms that were not protected, ruining thousands of acres of crops. Dicamba is particularly volatile and likely to carry away in hot weather.

According to AgJournal, dicamba can start to vaporize and drift away three days after it has been applied.

The revelations from the successful $265 million lawsuit come amidst a deluge of complaints in several states. Regulators in Indiana, a soybean-intensive state, have been overwhelmed for the past three years by complaints that dicamba drift has ruined farmers' profits. According to The Republic in Columbus, Indiana, "Even small amounts of dicamba hitting unintended crops can lead to a 30% to 40% yield reduction, agricultural experts said. That can mean a $180 loss per acre, or $100,000 for a medium-size farm."

In Missouri, complaints about dicamba misuse have grown into a backlog of more than 600 cases. The Missouri Department of Agriculture had no cases of dicamba complaints in 2017, but was inundated with 595 cases by the end of 2019. According to the U.S. Environmental Protection Agency, before dicamba-resistant crops existed, approximately 231,000 pounds of the herbicide was spread every year. In 2017, Americans used more than 10 million pounds on cotton and soybean crops, as The News Tribune in Missouri reported.

"The documents are the worst that I've ever seen for any case that I've worked on," said lawyer Angie Splittgerber, a former tobacco industry defense attorney, as The Guardian reported. "So many of them put things in writing that were just horrifying."

Editor's note: This article has been updated with respect to a correction published in The Guardian on March 31. Internal emails described in the third paragraph were from both BASF and Monsanto, according to The Guardian.

The new system allowed farmers to plant dicamba-resistant soybeans and cotton. Then farmers could spray dicamba over their fields and kill everything that had developed a resistance to glyphosate, according to The Guardian.