Indonesian enforcement questioned as fires flare up on the same concessions

JAKARTA — At least three companies whose concessions were burned in the 2015 fires that razed huge swaths of forest in Indonesia are also caught up in this year’s fires, prompting calls by the government for a stern crackdown on repeat offenders.

The fires this year, mostly on Sumatra and Kalimantan, the Indonesian portion of Borneo, have burned 328,000 hectares (810,505 acres) of forest to date. They’ve also generated huge clouds of smoke that have sickened nearly a million people and caused the deaths of several, including a 4-month-old baby and a newborn.

Much of the fires are on land granted as concessions to plantation companies, which have been routinely accused of burning forests as a cheap way of clearing the land in preparation of planting. One such company is palm oil firm PT Ricky Kurniawan Kertapersada: this year, some 1,200 hectares (3,000 acres) of its concessions have been burned, according to Rasio Ridho Sani, the Indonesian environment ministry’s head of enforcement.

“And now [the company’s concession] has burned again,” Rasio told reporters in Jakarta on Oct. 1. “We’ve sealed off the concession.”

At least two other companies in Sumatra have also experienced fires on their concessions this year after a similar problem in 2015, according to Rasio. He said the government would impose heavier sanctions on repeat offenders, including revoking their permits entirely. Companies with fires on their concessions typically receive a warning and have their permits suspended temporarily, but are invariably allowed to resume operations soon after.

Rasio said the central government always had the option of permanently revoking the permits, but would first need to scrutinize each case with the provincial, district and municipal governments responsible for granting the permits in the first place.

“We will inform them about the results of our monitoring of these companies with repeated forest fires,” he said, adding that if the local authorities refused to revoke the permits, the environment ministry had an override to do so. 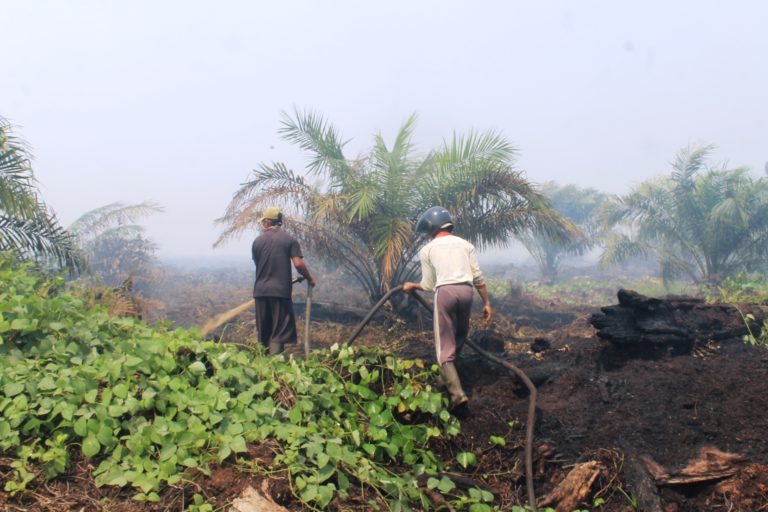 The fact that many of the same companies responsible for the fires in 2015 are also implicated this time around is echoed in a recent Greenpeace report, which finds that the past offenders largely went unpunished or received only mild sanctions.

It’s this lack of a deterrent that has allowed fires to burn in the same concessions almost every year, Greenpeace says in the report.

Greenpeace analyzed official government data and maps to identify the concessions with the most burned area between 2015 and 2018, how often they burned during that period, and the companies or conglomerates that held these concessions.

The NGO then analyzed details of the palm oil and pulpwood companies with the largest areas of burned area during that period to identify whether serious civil and/or administrative sanctions have been handed down.

The analysis found that of the 10 oil palm plantation companies identified, not a single one had had its permit revoked by the government.

“So none of these 10 companies received [heavy] sanctions, even though their [burned] areas were big,” Kiki Taufik, the global head of forest campaigns at Greenpeace Indonesia, said at the launch of the report in Jakarta.

Greenpeace also analyzed 12 palm oil groups with the largest total burned area in their concessions between 2015 and 2018, and found that only two — Fangiono Family and Gama — had received serious sanctions from the government.

This year, significant numbers of fire hotspots have been detected in seven of these companies’ concessions.

Kiki said this signaled a failure by law enforcement to prevent repeat fires on these particular companies’ land. He described the law enforcement measures taken in 2015 as “weak and inconsistent.”

Responding to the report, Rasio said Greenpeace should have taken a broader look at enforcement actions taken by the ministry recently by comparing them to measures taken before 2015.

Since 2015, the ministry has sued 17 companies in forest fire cases and won nine of the cases. Those companies have been ordered to pay a combined 3.15 trillion rupiah ($223 million) in fines, but only one, PT Bumi Mekar Hijau, has paid its tab of 78 billion rupiah ($5.5 million).

Court hearings are underway in five cases, but have yet to begin for three others.

Rasio said the scale of the fines was unprecedented for any industry across Indonesia, signaling the environment ministry’s seriousness about cracking down on forestry-related violations. He also said the government had sealed off 64 concessions in Sumatra and Kalimantan, 20 of them owned by foreign companies, and had pressed criminal charges against eight of them.

He acknowledged there was room to strengthen enforcement to prevent a repeat of the burning that occurs annually.

“Since 2015 until now, we’ve studied the law enforcement that we’ve done [and seen that] it has just given a shock therapy effect, but not a long-term deterrent effect,” Rasio said.

He said the ministry would ramp up its efforts, including punishing companies for benefits gained from burning their land. At present, companies that are fined for burning and have their licenses suspended can resume planting once the suspension ends. Rasio said the ministry was now looking at ways to fine companies that had developed plantations on land burned within the past two years.

The central government is also calling on local authorities to be more vigilant about violations on concessions granted locally. Rasio said this would put local governments on the front line, as intended when the process of issuing permits was decentralized from Jakarta to the regions, and increase the scope of law enforcement against violating companies. 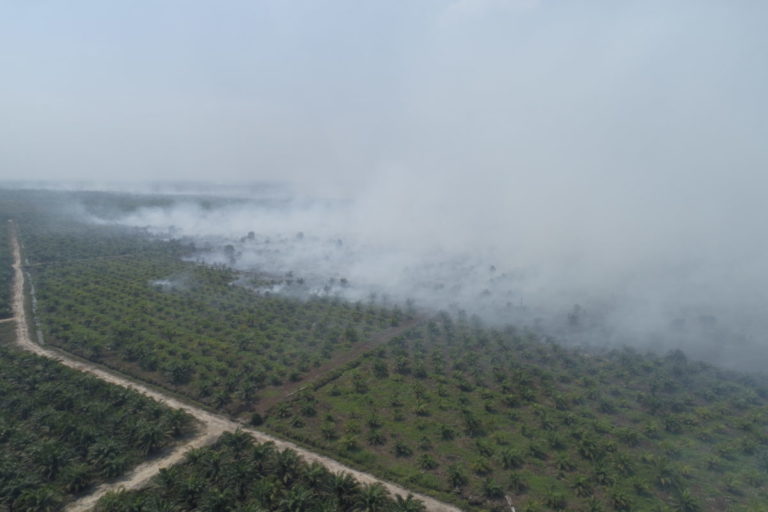 While Greenpeace found that law enforcement against palm oil companies was lax, it said the government issued more serious sanctions against pulpwood companies with burned concessions, revoking three licenses between 2015 and 2018.

But Greenpeace noted inconsistencies in enforcement, with the companies with the largest burned areas or more frequent fires not receiving severe punishments.

For instance, the government-owned Perhutani/Inhutani and related companies had the second-largest area of burned land on their concessions during this period, but received just two serious civil and administrative sanctions.

According to Greenpeace, PT Bumi Andalas Permai had the single largest burned area (81,800 hectares, or 202,100 acres) of any concession in Indonesia between 2015 and 2018 across all commodities — and yet the company was only ordered by the government to not replant on the burned land.

“And yet, the only serious civil or administrative sanction received by the company that year was  a temporary license suspension, but that was for replanting on previously burned land, not for the fires themselves,” Kiki said.

PT Arara Abadi, another APP affiliate, was found by Greenpeace to have fires flaring up on its concession every year between 2015 and 2018.

The government recently sealed off part of PT Sumatera Riang Lestari’s land. “However, a criminal investigation against the company was dropped in 2016 because there was a lack of evidence,” Kiki said. 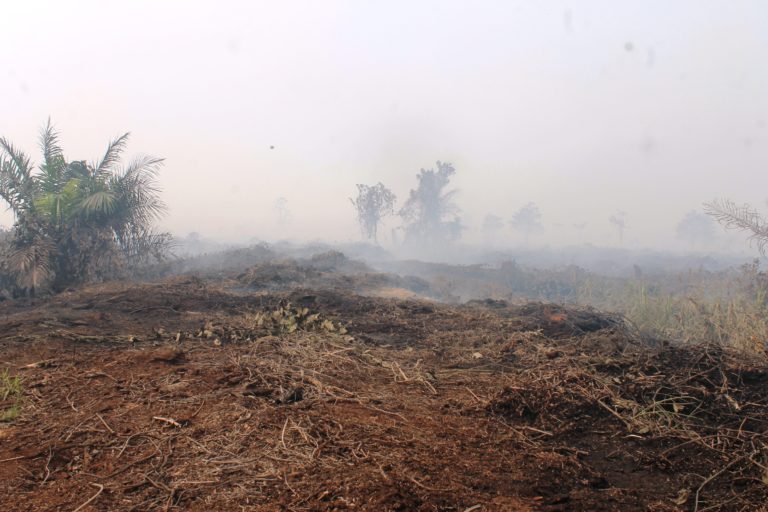 Both APP and APRIL have refuted the findings in Greenpeace’s report, saying they’re based on inaccurate data.

APP said some of the companies listed in the report weren’t even its suppliers and “to ensure accuracy, fire-related data should be obtained from the authorized government agency.”

APRIL questioned the accuracy of the so-called burn scar map data used by Greenpeace, based on remote-sensing analysis of freely available medium-resolution optical-based satellite imagery and hotspot detection alerts. APRIL said there were various technical factors that could skew the accuracy of the burn scar map, such the level of certainty for hotspot detection, and cloud cover and cloud shadow affecting the results.

“We’ve suggested a number of ways in which the accuracy of burn scars analysis can be improved,” APRIL sustainability operations manager Craig Tribolet told Mongabay. “For example, we believe that only hotspots with a confidence level of more than 90 percent should be included, as it is only above this level that a hotspot is more likely to be an actual fire. “

Given the high level of uncertainty, he said the kind of analysis that Greenpeace carried out would have to be supported by on-the-ground verification.

Tribolet said APRIL had been able to reduce burned area in its concessions by 90 percent since 2014 through a no-burn policy.

“The accuracy of APRIL and its supplier partners’ burn area over the period under study is only a fraction of that estimated in Greenpeace’s report,” Tribolet said. “This is something we’ve offered to clarify with Greenpeace.”

There’s also discrepancy between the number of hotspots in the Greenpeace’s report and the one identified by APRIL. As of the end of August, APRIL had identified 384 hotspots in its concessions, but said 245 of them were confirmed as not being related to fires and only about 30 were confirmed as fires. The Greenpeace report showed there were 483 hotspots as of Sept. 16 in PT Sumatera Riang Lestari’s concession.

But that concession and that of fellow APRIL affiliate PT Riau Andalan Pulp and Paper are among five that have been sealed off by the environment ministry this year in Sumatra’s Riau province, according to a document obtained by Mongabay.

Using remote-sensing technology to derive a figure for burned areas is less than ideal, according to David Gaveau, a landscape researcher at the Center for International Forestry Research (CIFOR). However, he said the data could be improved if APRIL were to publish its own burn scar maps.

“If APRIL is questioning the ministry’s data, they should publish their burn scar maps to the public for comparison,” Gaveau told Mongabay. “At the moment APRIL does not share this information so it is impossible to compare and this casts doubts.”