How Can My Garden Be Part of the Climate Solution?

You might have heard that your garden can be a part of the climate solution, but how does it really work? Climate Victory Gardening is all about making decisions in your garden that help it sequester carbon—that is, pull carbon out of the air and store it underground—and helps you offset emissions from other parts of the food system.

First, why are we focusing on climate and agriculture?

The research is out there and it’s clear that we need to act aggressively on the climate crisis. Some reports say that we only have 12 years to meaningfully address the climate crisis. It’s also said that we have less than 60 years of agricultural topsoil left to grow food. At the same time, our food system is a big part of the problem, emitting between one quarter and one third of the world’s greenhouse gases.

We know that we need to slow the pollution we’re emitting, but there’s already too much carbon dioxide in the air, so we also need a way to drawdown carbon if we’re going to slow the warming of our atmosphere.

The good news: research shows that agriculture and gardening are a great way to do both—pull carbon out of the air and slow emissions. This intersection of food and climate is a place where we can exercise our decision-making power and engage in meaningful action, every time we eat or work in the garden.

Green America is working with large farms and companies to do this as well, but change at the large scale takes time, which is why we’re asking gardeners to be trail blazers in their own backyards to get this idea out into the world ahead of the curve, before climate-positive food is something that’s widely available at the grocery store.

There’s two ways to think about climate solutions in our gardens.

The first is maximizing soil protection within our gardens, because this is where we can capture carbon by pulling it out of the air and storing it in plants and underground.

The second way is all about minimizing climate impacts beyond the boundaries of our gardens and making decisions that help reduce emissions. For example, if you don’t buy chemical fertilizers, you’re reducing pollution and emissions that would have come from producing and transporting that fertilizer from the factory to the store.

How do plants and soils capture carbon?

This is something they do naturally, and it’s up to gardeners to create the right conditions.

Plant grow using photosynthesis, a process in which they harness the sun’s energy, water, and carbon dioxide to create food in the form of sugars or carbohydrates (base word: carbon). This food helps plants grow and build cells, as well as feed life in the soil that provides them with nutrients (through a symbiotic relationship, meaning they help each other out). The plants grow to produce healthy food and release oxygen as a byproduct, which is what makes our plant habitable for life. 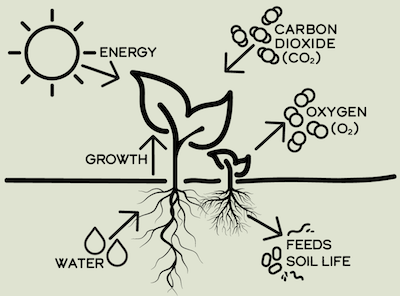 A single teaspoon of healthy soil has billions of microorganisms. This soil life includes everything from earthworms to beneficial bacteria and fungi; these are the workhorses we’re harnessing to pull carbon out of the air.

Today, industrial agriculture and conventional gardening methods treat soil badly, often with synthetic chemicals that harm life in the soil, which then releases carbon into the air—turning farms and gardens into a source of carbon emissions. But, under good management, soil and these microorganisms can hold huge amounts of carbon. We just have to grow food the right way.

Carbon is something we often think of as bad, because we associate it with our changing climate. But, it’s the basic building block for all life. In the atmosphere as carbon dioxide, carbon creates a greenhouse effect that heats our planet, but plants use carbon to create cells to grow and feed microorganisms in the soil that support them.

It’s the carbon that goes into the soil through plants that has the biggest potential for change. Those billions of microorganisms? They represent a quarter of Earth’s biodiversity, and this is where we want to get the carbon, because it’s more likely to stay underground and it helps our gardens grow.

You don’t have to be a scientist to know this; many gardeners are well acquainted with carbon in healthy soils, but might recognize it as organic matter, the crumbly texture, or its rich, earthy smell. Soil health is integral both as a climate solution and a successful garden.

When we grow food at home in a regenerative manner; we purchase less food that has traveled across the country, we keep methane-producing organic materials out of landfills with composting, we increase the water holding capacity of our soil to decrease flooding and runoff, and most importantly we rebuild our soil health bringing back its carbon sequestering potential.