Hotel Made of Recycled Materials Floats in Copenhagen Harbor 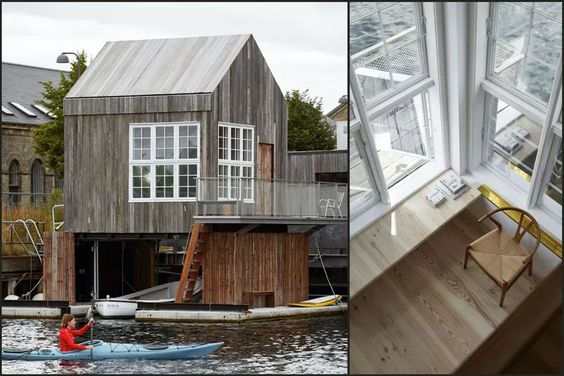 The architectural critic for the Financial Times, Edwin Heathcote, recently wrote about "The curse of the Airbnb aesthetic," asking "Why do we travel? And would we still travel if everywhere was the same? What would be the point?" Heathcote describes how Airbnbs have developed a style of their own.

"They are designed to seduce with an idea of generic global familiarity. They represent a lifestyle that is metropolitan, chic, minimal and self-congratulatory. You enjoy the image because this is how you imagine you might want to live. You recognise it already. What is happening here is a kind of invidious digital aesthetic seepage, an unintentional effect of the gradual global convergence of the interior. There is an irony to this because Airbnb seeded an idea of authenticity. The trick was to disrupt the hotel industry by allowing travellers (never tourists) to temporarily insert themselves into the homes of real people in real neighbourhoods where real people live (as if hotels were inevitably located in unreal places)."

Heathcote struck a chord with me because I have stayed in Airbnbs that exactly met his description. It's one reason I was intrigued when Adam von Haffner (seen here previously on Treehugger in sunglasses) sent me information about the KAJ Hotel in Copenhagen.

The KAJ Hotel is in fact a single floating hotel room built by Barbara von Haffner and Toke Larsen; they live on a houseboat and many people wanted to rent it or asked what it is like to live on it.

"The idea for KAJ Hotel arose in the wake of these questions, which were almost impossible to answer unequivocally, as the experience varies depending on wind and weather conditions, as well as what time of day - or year - one stays there. One has to try it out for oneself - and every moment has its own charm." It's in a great location in the harbor opposite the Royal Playhouse, and notably, "we have the Amager Bakke – waste to energy development, right in our backyard." Imagine marketing a hotel in North America by saying "we're right next to the city incinerator!" But what makes it so Treehugger-correct is the way it was built.

"KAJ Hotel was built according to the same principles as Barbara’s and Toke’s own houseboat; Primarily from recycled and surplus materials - partly because the budget does not run wild but also because they are in love with the idea of giving things a 'second life'. Moreover, they always feel more at home in surroundings with a great story rather than new and impersonal ones. This approach to materials automatically makes the construction process a constant development process, where the discovery of an old door or window changed their ideas and design solutions." looking down towards windows at KAJ Hotel. KAJ Hotel

The funny thing is that Heathcote would probably say that this fits right in the Danish Modern aesthetic that is imitated everywhere, but it truly is Danish, not what he calls "air-washing" but the real thing, made from real found stuff: Given that it is a single 172 SF (16 M2) room, complete with "with a king-size bed, a toilet and bathroom with shower, kitchenette with refrigerator and freezer, hob [cooktop] and basic kitchen utensils," I wondered why it was called a hotel in the first place. Barbara von Haffner tells Treehugger:

"The reason why we call it a hotel is due to the layout of the room. One room with a big double bed, a bench, a chair, 2 stools and a small table. Everything is in this one room. Just like a hotel. Also - this is not our ‘private home’ - like the airbnb was intended to be. If you stay there for more than 1 night we provide roomservice. Fill up the coffee and porridge, make the bed and clean the bins. There will also be a ‘minibar’ with very few but very good things such as a bottle of gin and a bottle of wine." The concept of Airbnb as a private home became purely notional years ago, and there are many who refuse to stay in them, given that they are often pushing people out of residential areas and often making housing unaffordable. That's another reason to appreciate the KAJ Hotel; it is not taking housing away from anyone. It's not even taking up any land. I like Adam von Haffner's attempt at a description of it:

"It's not a hotel, it's not a houseboat, it is something in-between and you are gonna love it." "Besides being a classical Danish name for a boy, KAJ also means ‘Quay’ or ‘Wharf’. And no matter how unattached you might want to live your life, you do need a wharf once in a while in order to stay grounded."