From trash to cash: How a Thai entrepreneur turned used flip-flops into a sustainable business model

One day in mid-2015, Dr. Nattapong Nithi-Uthai, who goes by the nickname “Arm,” looked at the pile of flip-flops in his backyard. Some 100,000 of them were stacked up waist high behind his house in Pattani, on the coast of southern Thailand. The flip-flops laid there undisturbed for months. A family of venomous snakes even built a nest inside.

Arm wanted to reuse the flip-flops, but he also wanted to produce a product that made money at the same time. After many months and several prototypes, he still didn’t have a winning product. Arm thrived on challenges, but this time he seemed stuck with his flip-flop mountain.

Arm’s breakthrough finally came in January 2016. Since then, he and his team, which includes Padinya Aree, Maradee Baka, and Ruslan Masae, have profitably reused thousands of old flip-flops, turning them into new shoes. They call their nonprofit project “Tlejourn,” a Thai play on words for traveling shoes.

Their success came after Arm and the Tlejourn team solved several challenges. First, because flip-flops can’t be melted down and recycled, they devised a low-tech, inexpensive way to upcycle old flip-flops by grinding them into small pieces and then gluing them together into one solid piece. Second, Arm convinced the volunteer group Trash Hero to give him all the flip-flops they found while cleaning up the local beach. With this, he had a free supply of flip-flops to upcycle. Third, Arm and his team finally hit upon upcycled shoes as their winning product.

Selling new Tlejourn shoes at 399 Baht ($13.32) per pair generated enough of a profit margin to make the project worth it. Since then, Tlejourn’s team has made over 3,000 pairs of new, upcycled shoes.

An estimated 5.25 trillion pieces of trash weighing nearly 270,000 tons are currently floating in the ocean. Discarded flip-flops may account for more than 25 percent, some 1.3 trillion flip-flops, if surveys from beach clean-ups are an accurate indicator. 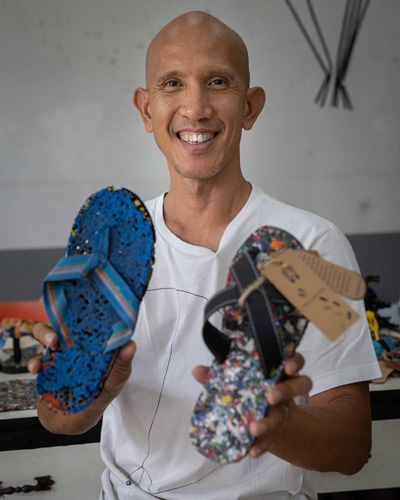 From his own experience, Arm guesses that there are enough old flip-flops collected in every five kilograms (11 pounds) of beach trash to make one new pair of Tlejourn shoes. That means that Tlejourn’s 3,000 pairs of new shoes equate to 15,000 kilograms (33,000 pounds) of ocean debris picked up on the beach.

While the total amount of trash upcycled for Arm’s new shoes might not seem remarkable, his entrepreneurial journey certainly is. In fact, how Arm and team achieved success is a model already being imitated by others who want to profit from trash.

The business challenge: How to beat trash

In 2011, Arm was 39, had earned a Ph.D. in the United States, and was on the staff of the Department of Rubber Technology and Polymer Science at the Prince of Songkhla University (PSU) in Pattani. In his free time, he ran, cycled, and helped out at his family’s business. Although he didn’t care about the environment at the time, a friend asked if he could upcycle some old flip-flops found on the beach. Accepting the challenge, Arm said, “Of course. It’s easy!” 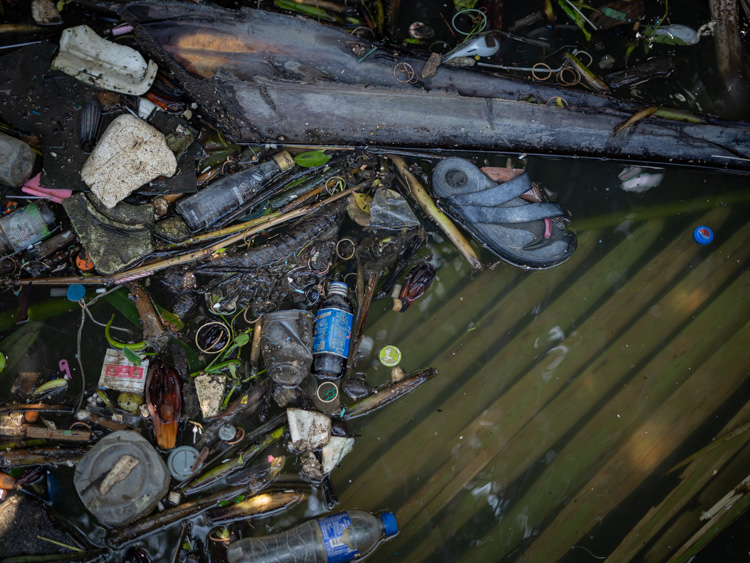 There are an estimated 5.25 trillion pieces of trash weighing nearly 270,000 tons floating in the ocean. Photo by Ryan Anders.

He took the old flip-flops and a “can-do” attitude to his university laboratory. There, he and his team began to experiment. They washed the dirt off the trashed flip-flops and then ran them through a grinding machine. When the flip-flop pieces were all about the size of a kernel of corn, Arm poured in a polyurethane binder. The binder functioned as a glue and made the small pieces stick to each other. Finally, the team made a “sandwich” by spreading the flip-flop mixture (with the consistency of chunky peanut butter) in-between two heavy metal plates. This “sandwich” was squeezed together in a hot press, resulting in a solid but flexible mat about the size of an A3 piece of paper and 4 centimeters (a little over 1.5 inches) thick.

Figuring out what to make and sell from the upcycled mats proved to be harder than Arm initially expected. “I always have in mind, these things need to be turned into a product. Someone needs to pay me to turn this into a product.” From 2011 to 2015, the team tried blocks, floor tiles, and even an exercise mat, but none of these product ideas seemed commercially viable.

In January 2015, as Arm was testing out product ideas, a massive beach clean-up organized by a group of Thai and foreign volunteers calling themselves “Trash Hero” was underway. Over a four-month period, Trash Hero volunteers camped out on Thailand’s uninhabited Tarutao Island and collected garbage. One of the first volunteers, Roman Peter, decided to sort the flip-flops out. Peter said the Trash Hero team hoped that “they might find someone who could reuse them.” His hunch was right. By the time the clean-up had finished in April 2015, Arm was waiting for them at the pier. He had seen Trash Hero’s posts on Facebook and come with a large trailer truck to carry the mountain of flip-flops back to Pattani. 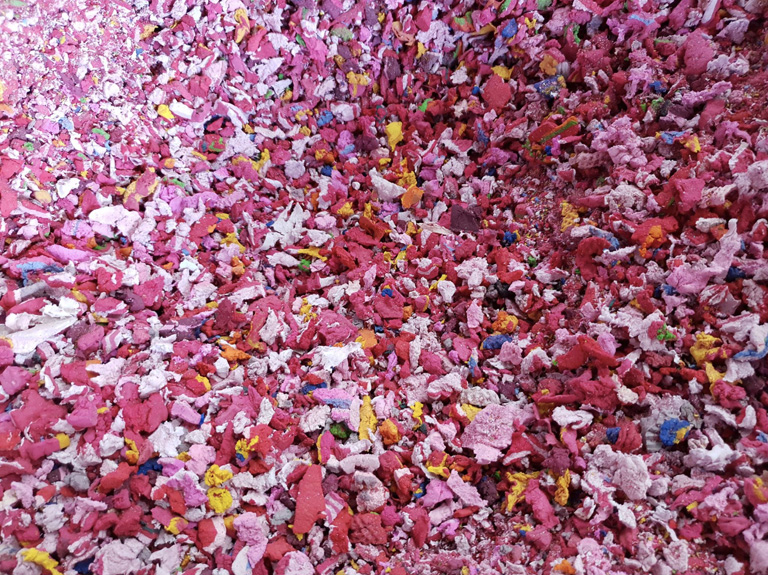 Old flip-flops are first ground up into small pieces in order to upcycle them into solid mats. Photo by Tlejourn.

In December 2015, Arm and his team had finally found a winning product. His students had chosen to make shoes for a competition in Bangkok. Each person on the team tore apart a new pair of shoes, stamped out a new shoe sole from the upcycled mat and then put their “green” prototype shoes back together.

They dreamed up a brand name, Tlejourn. Days after posting pictures online, news of the Tlejourn project went viral in Thailand. Hundreds of people contacted Arm wanting to place an order. The team didn’t have the capital to mass-produce hundreds of shoes, so in 2016, they started a crowdfunding campaign. Customers paid in advance while Arm’s team struggled to fulfill the orders. Tlejourn had grown beyond a small student project, leading Arm to expand the team. 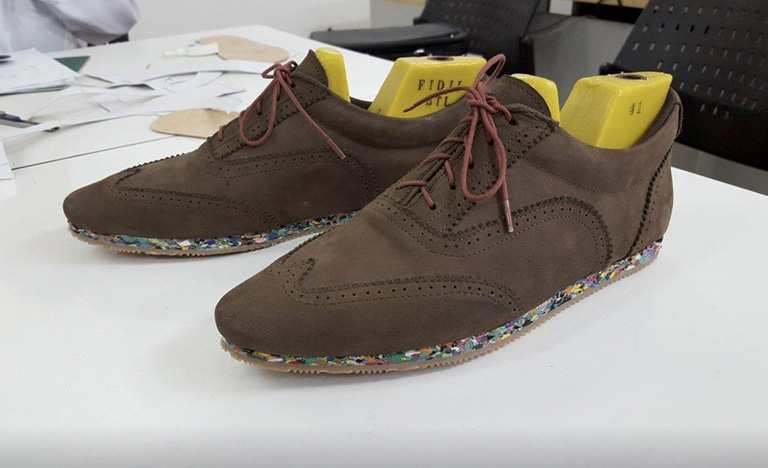 Scaling up the business

In early 2017, Arm visited a rural village some 30 minutes outside of Pattani. There, he was greeted by Mrs. Supatra Cometan. From her family’s wooden house, surrounded by rice fields, rubber tree plantations, and a mosque, Supatra leads a 10-person collective of women sewing shirts, small bags, and handicrafts.

Arm asked Supatra and team not only to sew a decorative bag, which he would use instead of plastic packaging to ship Tlejourn’s orders, but also to assemble Tlejourn’s shoes. Despite Supatra’s reservations — and surprise that the sandal was made of trash — she and her group agreed.

At the university, Arm’s team stamped shoe soles at his lab and then went to the village to train the women to assemble the shoes. ”We made many mistakes,” said Supatra, but they kept practicing and simply sent malformed parts back to Arm’s lab, where they were put back into the grinder. 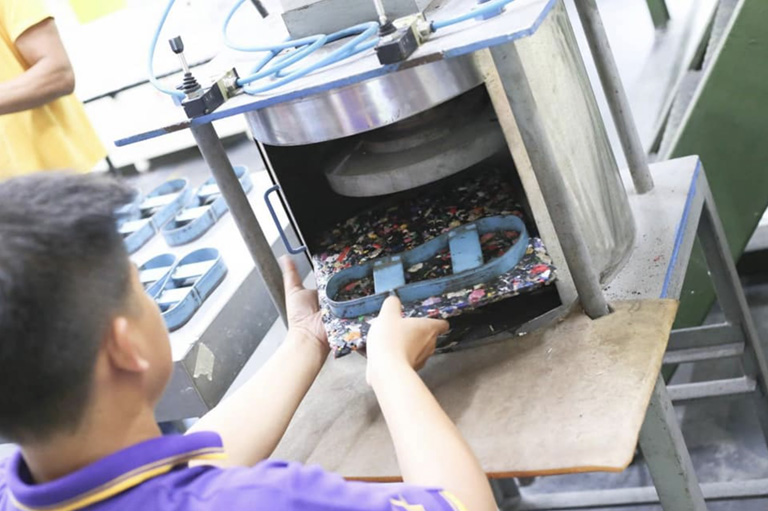 That year, 2017, Supatra’s four-woman shoe team made 574 pairs of Tlejourn sandals. That number increased to 809 pairs in 2018, and is already nearing 1,000 in 2019. In addition, the sewing collective has produced some 3,000 cloth bags over the last three years. Arm not only found a way to get Tlejourn’s shoes made but also to benefit these village women, some of whom had never been employed or worked outside of their homes before.

Since 2015, the Tlejourn team has also supported companies and one shoe school to incorporate upcycled flip-flops into their own products. Most recently, Tlejourn worked with Nanyang, one of Thailand’s oldest shoe brands, to create its own upcycled sandal, the “KHYA” (a Thai play on words for trash). When Nanyang’s limited-run sandals launched in September 2019, the company was initially prepared to make 10,000 pairs. Online demand was so strong, however, that after just three weeks, Nanyang had sold 27,886 pairs of upcycled KHYA sandals. 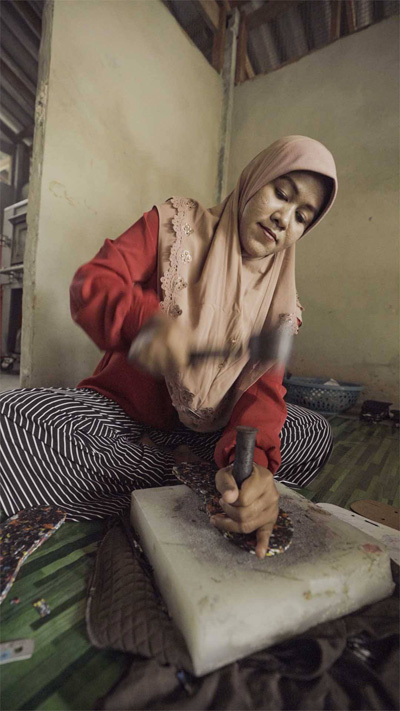 The additional income earned from assembling Tlejourn’s shoes makes a real difference for women living near Pattani. The majority of families in this area can’t afford a new refrigerator if their old one breaks. Photo by Ryan Anders.

There are multiple positive outcomes from the Tlejourn project. Household incomes for the women assembling Tlejourn shoes have increased by approximately 15 percent. That increase in income is significant. The majority of families in the area couldn’t afford a new refrigerator if their old one broke. Additionally, Supatra says that the project has boosted the women’s self-esteem and their awareness of trash in their own small community.

Trash Hero, which points to Tlejourn as one of their success stories, has now grown to over 120 chapters. Tlejourn’s success has also inspired other Trash Hero chapters to search for ways to upcycle trash. In Indonesia, Trash Hero Gili Meno reuses Styrofoam to fill beanbag chairs and pillows. 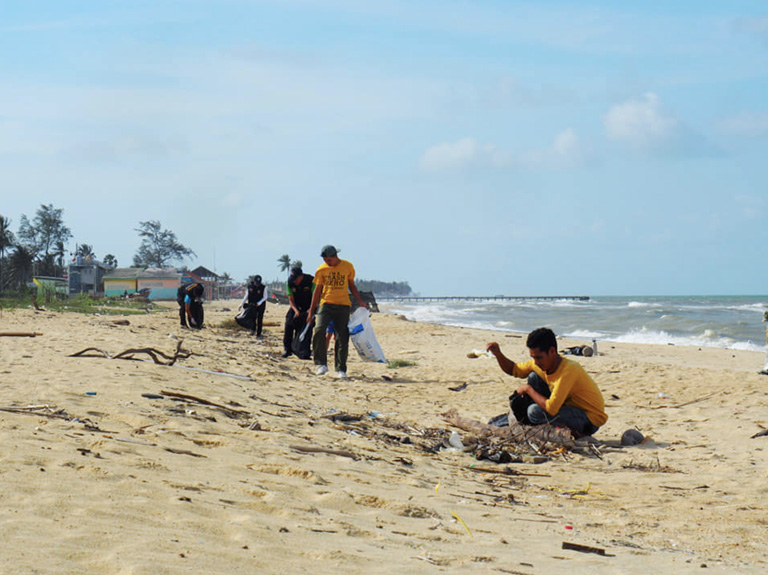 Since its founding in 2014, the nonprofit organization Trash Hero has grown to include 120 chapters, mainly in Southeast Asia. Photo by Tlejourn.

Nanyang in Thailand is studying how to switch from plastic to biodegradable packaging and how to create a profitable, long-term business model for their KHYA sandals. The initial KHYA production run required three additional, costly steps compared to their normal flip-flops, but Mr. Piya Sosothikul, a member of Nanyang’s Board of Directors, sees a path to profitability. “If you do about 100,000 [annually], the price would not have to go up that high. It would have to go up to 600 Baht.”

Flip-flops still wash ashore in Pattani, and although the Tlejourn project hasn’t totally changed that fact, it has completely altered Arm. “I was like zero percent green at the start,” he said, but picking up trash every week “is really powerful and it slowly changes you bit by bit.”

Now Arm feels empowered. Instead of waiting for the government to take action, he believes he can tackle any problem. He’s even started a refill store called “Zero Waste Pattani.” From the ground floor at his home, Arm and his family sell shampoo, soap and washing detergent to customers who bring their own reusable containers. “I think we can change people who join us, and slowly we can change people around them. Slowly we can change the community.” 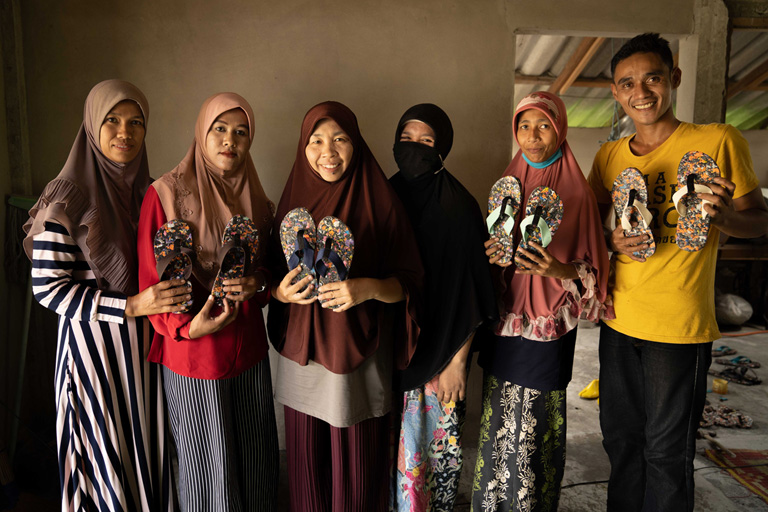 Tlejourn’s shoes are assembled by an all-women team in rural southern Thailand. Earnings from the project raise their household income by approximately 15%. Photo by Ryan Anders.