The Amazon fires have now reached the Pantanal amid a severe drought.

The world’s largest tropical wetland, the Pantanal, is burning at a record speed in Brazil, with fires expanding fast and threatening its biodiversity. This is happening on a backdrop of a record fire season in the whole Amazon region, with President Bolsonaro being questioned by the international community. 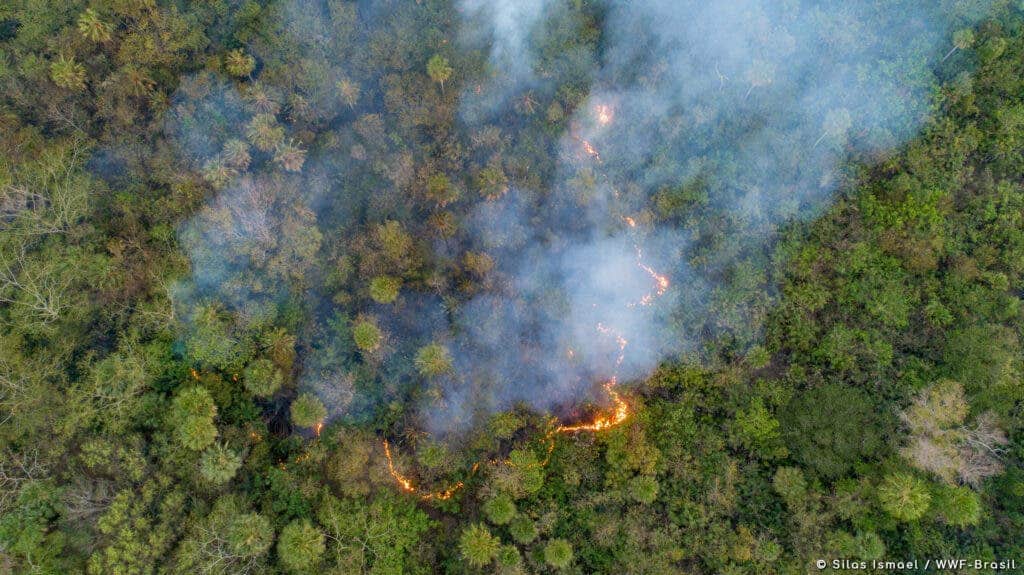 With an area of 150,000 square kilometers, the Pantanal crosses the Brazilian border and extends through Bolivia and Paraguay. It’s known for its impressive biodiversity, attracting visitors from around the world eager to see jaguars, caimans, toucans, monkeys, giant otters, and many other species living there.

“Very few animals survive. The ones that do often suffer very severe effects. They’re burned to the bone, they often have to be euthanized, or die of hunger and thirst,” said Juliana Camargo, head of wildlife conservation group AMPARA Animal, in a statement. “The only hope is for it to rain, but that’s not expected until November.”

Nevertheless, over the last few months, the area has been challenged by record flames, fueled by an extended drought in the region. So far 12,567 fires have been recorded in the Brazilian Pantanal, which is more than in all 2018 and 2019, according to satellite data collected by Brazil’s national space agency INPE.

The flames even reached the Encontro das Aguas State Park, a nature reserve known as the home to the world’s biggest jaguar population. The park is crisscrossed by five rivers and spans 109,000 hectares or 270,000 acres. According to state authorities, firefighters are trying to protect the farms, hotels and the park itself.

Júlio Cesar Sampaio, leader of WWF-Brazil’s Pantanal Initiative, said the region is seeing one of the worst droughts in the last 47 years. The water level in the Paraguay River, which is one of the most important in the biome, is critical. While climate change partly explains the drought, human actions also have accelerated the degradation of the Pantanal, he said.

In fact, most of the fires that have happened over the past few weeks started with fires made to clean cultivation areas or pastures. The Pantanal is facing large pressures because of the extensive agriculture and livestock activities in the whole Amazon region, which have been encouraged by President Bolsonaro since he took office.

Farmers and ranchers introduce non-native crops to the region, as they burn more easily than native vegetation, forestry engineer Vinicius Silgueiro of the Life Center Institute (ICV), said. The government has cut funds for environmental protection agencies, creating a widespread sense of impunity, he argued.

The Pantanal crisis is part of a larger forest fire problem across all the Amazon region in Brazil. Satellite images showed a record number of 29,307 fires in August, the second-highest number in a decade and only 5.2% lower than the absolute highest, in August 2019.

Environmentalists link the forest fires with Bolsonaro’s vision of economic development, which essentially allows illegal loggers, cattle ranchers, and miners to destroy the forest. Bolsonaro has repeatedly said mining and farming are needed to take people out of poverty and has shown a lack of interest for the Amazon’s conservation.

Under growing pressure from global leaders, Bolsonaro recently deployed the army to the Amazon to crack down on deforestation and fires, and decreed a ban on all agricultural burning. But environmentalists remain critical of the far-right leader, asking for further action to better protect the country’s natural resources.