Extreme events 'presage worse to come' in a warming climate 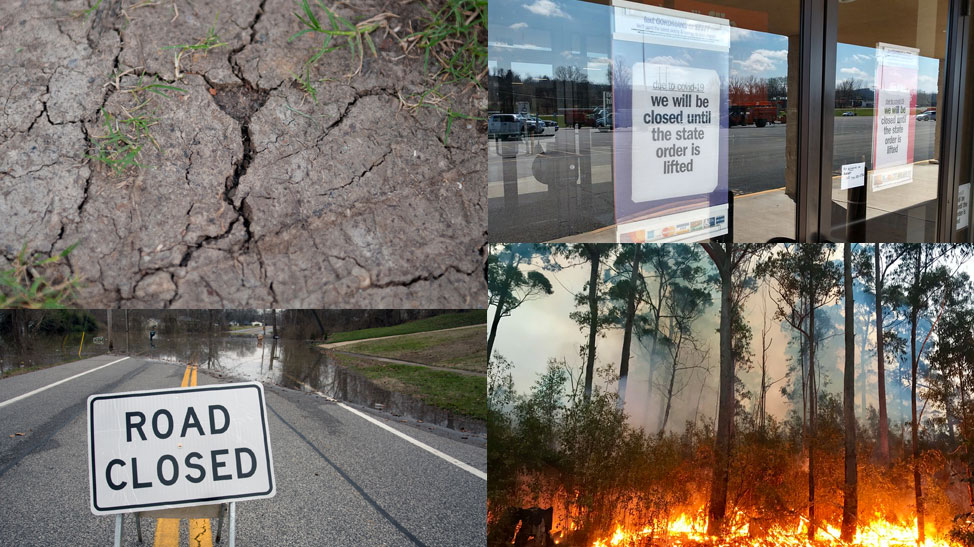 Mark Twain said a century ago that “fiction is obliged to stick to possibilities; truth isn’t”. Today we might just say, “You can’t make this stuff up”. However stated, the sentiment is painfully appropriate when it comes to extreme climate events. They are important not only for the damages they are inflicting here and now, but also for what they bode for the future. Many of the events we are currently experiencing would have been unimaginable in the latter half of the 20th century.

We would not have to turn the clock back very far to a time when few would have believed that a record-shattering heatwave in the western U.S. could raise Los Angeles temperatures above 120°F, or that areas of Siberia could experience temperatures of over 100°F. Nor would many have anticipated the wildfires, unrivaled in their intensity and destruction, in western U.S. states and Australia, or the Atlantic hurricanes of hitherto unexperienced ferocity, wreaking destruction of remarkable dimension, costs, and unpredictability. Even more surprising was the line of severe thunderstorms racing across the central U.S. with widespread winds of more than 100 mph, destroying crops and damaging structures.

Pandemic concerns are heightened by warming, and quarantining compounds the challenges.

These are just a handful of the extreme events over just the past year, each augmented by a warming climate, causing pain and death and substantial economic loss. Unfortunately, the list could easily be expanded with other examples of severe storms, such as floods and droughts.

The list is truly mind-numbing, and understanding what it means is greatly aided by the meticulous record keeping of federal agencies such as the National Oceanic and Atmospheric Administration (NOAA). Its website has kept track of extreme climate events exceeding billions of dollars. Figure 1 shows the trend of the past four decades in the U.S., where the overall damage costs reached or exceeded $1 billion (all adjusted to equivalent 2020 dollars). Definitely cause for concern.

As if the extreme weather events to date weren’t enough, so far in 2020 the globe has experienced another type of extreme event related to climate change which until recently had escaped the public’s radar screen, one with a unique ability to cause widespread planetary harm in a matter of weeks. It now appears that the likelihood and cost of a pandemic, such as COVID-19, is increased by climate change. The natural barriers that separate humans from the wild have been weakened by a loss of natural forests, one effect of a warming climate, increasing the possibility that the contagion can jump from one species to another.

Once humans become infected, containment is made more difficult by other extreme events. Indeed, the American Red Cross now calls for hurricane preparedness to consider the needs for quarantining, social distancing, and other measures aimed at preventing a new COVID-19 hotspot. Preparations for other extreme climate events will require similar rethinking.

Why are we seeing all these extreme events? In two previous essays as part of this series [see here and here], we summarized scientific evidence on warming and on its being caused primarily by human emissions. Of course, it would not be right to blame every individual weather event on global warming. But extreme hot days will become more likely, and severe cold snaps less so, and with the shift to warmer temperature patterns come the changes in flood, drought, fire, loss of glacial ice, and more.

While the resulting climate extremes experienced so far are cause enough for profound concern, scientists have been warning that they are a canary in the coal mine, a troubling harbinger of worse to come. Figure 2 depicts the first of a continuing series of such diagrams entitled “Reasons for Concern” (RFC) in climate studies. It shows extreme events (RFC-II) as early precursors of even more profound threats to the habitability of the planet. These include irreversible large-scale and abrupt transitions (RFC-V) that occur when positive feedbacks inadvertently lead to a tipping point – such as the loss of the Amazon rainforest or rapid melting of polar ice sheets – potentially with catastrophic consequences.

The processes leading to potential tipping points were set in motion by the burning of fossil fuels and deforestation in the industrial revolution. The warming that has already occurred is leading to the thawing of permafrost, opening the way for the release of huge amounts of additional greenhouse gas into the atmosphere, both methane and CO2. Continued warming also threatens additional harm to forests and their ability to sequester CO2 and accelerates the melting of Arctic ice, which reflects the incoming solar heating.

These and other positive feedbacks in the climate system serve to further amplify warming and sea-level rise. Scientists warn that Earth’s large-scale ocean circulation, which is a major planetary heat-dispersion system, may be further compromised, both in the North Atlantic and beyond. Such warnings are ignored at great peril.

If all of this is disturbing, it should be … because it is. The extreme events that we are witnessing are not only worrying in their own right, but presage worse to come. If one asks why we still procrastinate to do something about it, good question. In the case of climate change science – as with all science – there will always be some lingering uncertainty. If not about the likelihood, then about the consequences. Or if not about the consequences than about who is at fault and should bear the burden. But keep in mind that uncertainty works both ways, both in overestimating and in underestimating potential risks. In the case of climate change, it appears that scientists have tended to under-, rather than over-, estimate the pace of change. Either way, continuing to kick the can down the road should not be an acceptable strategy. Surely the time for procrastination is over.

Action must initially involve three parties: the scientists whose job is to enlighten and advise; the electorate whose job is to decide how risk averse they choose to be; and their political leaders whose job is to reflect the will of the people and act accordingly. The canary in the mine mouth is on life support. Its fate is in all of our hands. We must all do our jobs.

Richard Richels directed climate change research at the Electric Power Research Institute (EPRI). He served as lead author for multiple chapters of the IPCC in the areas of mitigation, impacts and adaptation from 1992 through 2014. He also served on the National Assessment Synthesis Team for the first U.S. National Climate Assessment.

Henry Jacoby is the William F. Pounds Professor of Management, Emeritus, in the MIT Sloan School of Management and former co-director of the MIT Joint Program on the Science and Policy of Global Change, which is focused on the integration of the natural and social sciences and policy analysis in application to the threat of global climate.

Gary Yohe is the Huffington Foundation Professor of Economics and Environmental Studies, Emeritus, at Wesleyan University in Connecticut. He served as convening lead author for multiple chapters and the Synthesis Report for the IPCC from 1990 through 2014 and was vice-chair of the Third U.S. National Climate Assessment.