What's happening in Turkey is a peek at our climate future. 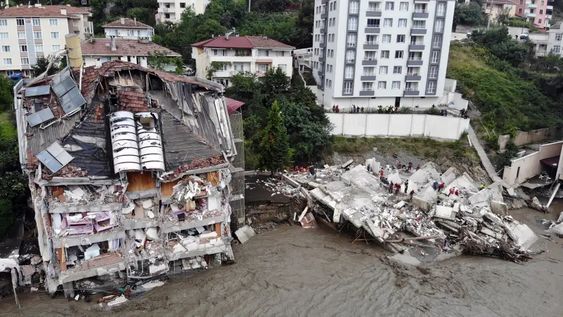 Flash floods have killed at least 27 people in northern Turkey after intense rains hit areas around the Black Sea Wednesday and caused streams and rivers to burst their banks. The floods come as the country struggles in the aftermath of hundreds of fires in the country’s southern region that killed at least eight people, forced thousands to evacuate, and burned more than 230,000 acres of forest.

More than 1,700 people have been evacuated across the northern provinces of Kastamonu, Samsun, Bartin, and Sinop following Thursday’s floods. At least five bridges collapsed in the affected region, and more than 300 villages are without power. While authorities have yet to put an official number on the number of people missing, one local broadcast outlet guessed it could be more than 100, while an opposition politician said it could be 300. Thus far, the missing include eight people from the same family, including four children.

Videos posted to social media show floodwaters gushing through towns with alarming force, plowing through buildings and picking up cars with ease. The Black Sea region is prone to flooding at this time of year, and experts say that the area has been mismanaged, with buildings built into flood plains and riverbeds and narrowing the rivers themselves. However, Turkish Interior Minister Suleyman Soylu, who visited the affected area, called Thursday’s floods “the most severe flood disaster I have seen,” and said floodwaters reached 10-13 feet (3-4 meters) in some places.

The floods come just as Turkish officials say that the more than 200 wildfires burning in the southern regions are mostly under control. The fires began July 28, and corresponded with searing temperatures in the area: Turkey logged its highest temperature on record, 120.4 Fahrenheit (49.1 degrees Celsius) in mid-July, and Antalya, a tourist destination at the center of the fires, had consistent temperatures above 104 degrees Fahrenheit (40 degrees Celsius) in early August. Ground temperatures maxed out at a whopping 127 degrees Fahrenheit (53 degrees Celsius) in Turkey. In neighboring Greece, which also saw breaking heat records and devastating wildfires, satellite images released Thursday show the extent of the damage over a 10-day period earlier this month; officials said Friday that a new fire had broken out on the battered island of Evia.

Disasters like fires and floods are going to become more frequent as the planet keeps warming. The IPCC report released earlier this week warns that rains and extreme heat and drought, which can make wildfire seasons more hellish, will become increasingly normal thanks to human activity. Heavy rains now happen with 30% more frequency around the world, and they have more rain in them too: about 7% more on average, according to the report. Heat waves that usually would have occurred once every 50 years now happen around once every decade; once-per-decade droughts, meanwhile, are now occurring 70% more frequently.

Turkey’s far from alone in facing climate catastrophe: it has hit home for many this summer that no place on Earth is safe from heat, fires, droughts, floods, and mudslides, with new catastrophes often coming back-to-back. Some places are also experiencing a second wave of climate impacts. Just a few weeks after a devastating heat wave killed hundreds of people in the Pacific Northwest, the region is suffering through yet another wave of extreme and unseasonable heat.

“Like many parts of the world, our country has been struggling with natural disasters for a while. It’s the same in America, Canada, Germany and other part of Europe,” Turkish President Recep Tayyip Erdogan said as he toured the flooded provinces. “Our hope is to escape these disasters with the least damage possible.”