Dad/daughter writers fear a warmer Minnesota future for their heirs

Their youthful lake-side memories behind them, dad and daughter fear loss of those experiences in a warming state. 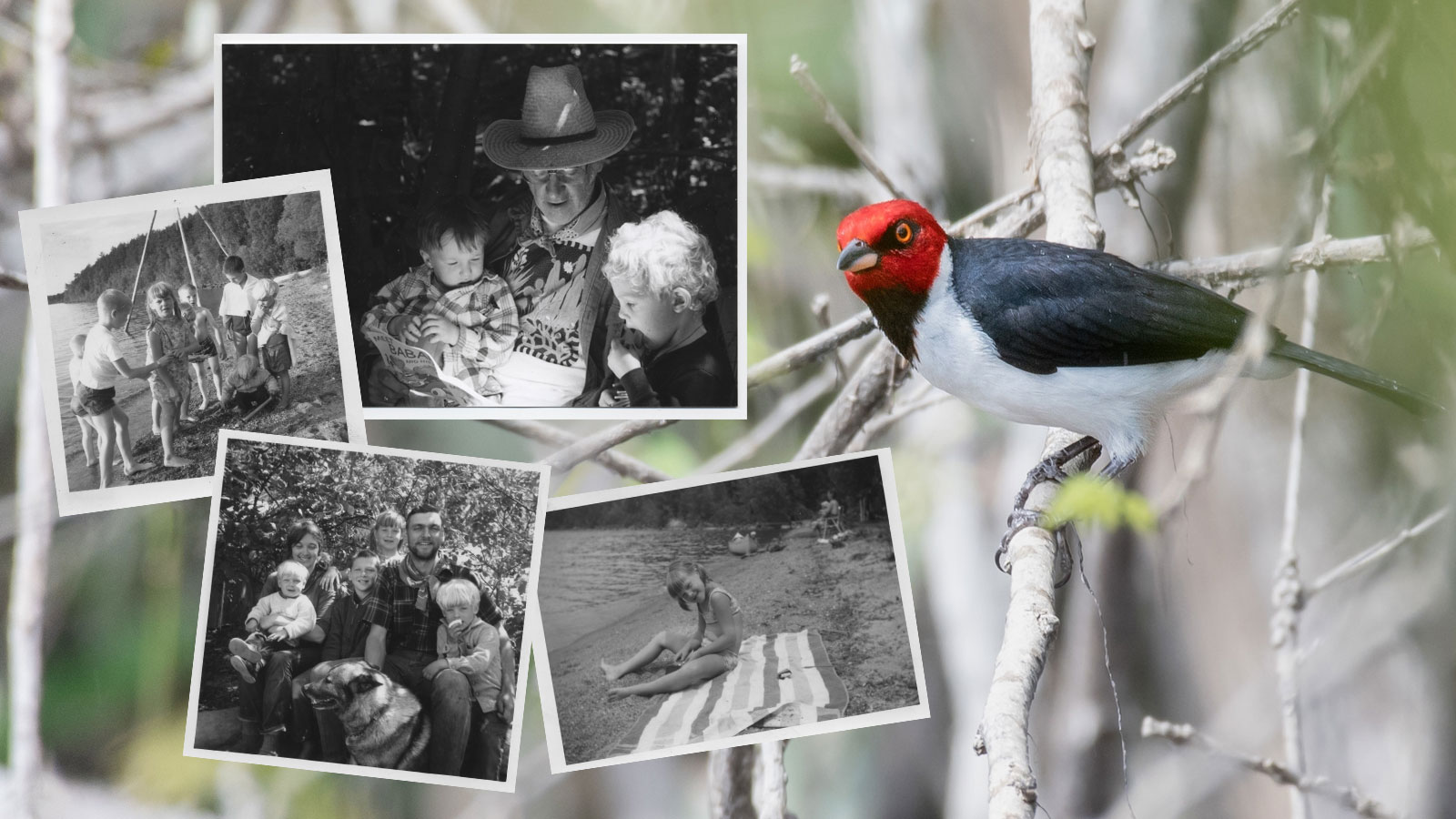 Their lived experiences and vibrant memories are many:

Those are among the fond memories a retired Lutheran minister and his wife and four kids carry with them decades later. But now they are concerned that the warmer Minnesota climate will preclude their heirs from having similar life-forming experiences and memories.

Pastor/writer/poet and life-long bird watcher and nature lover Jim Alger, now 87, had served parishes in North Dakota, Iowa, Winnipeg, Manitoba, and White Horse in Canada’s Yukon Territory before retiring in 1995. For more than four decades, he and his wife JoAnn had leased land from the Ojibwa Indians to camp with their children on the shores of Leech Lake.

He and JoAnn now live in Fargo, N.D., and his daily ritual involves ample time taking in the outdoors, and in particular birds, along the Red River of the North, between Minnesota and North Dakota. He’s written of his countless observations – complete with his two-way conversations with wildlife and nature – in a 2017 book, “At Home in the Woodlands: A Writer’s Reflections on Nature.”

Mentored on climate change issues by his daughter Julie Marckel, now a resident of the Twin Cities area, Alger and she contributed essays to the climate change story-telling initiative of the nonprofit Climate Generation: A Will Steger Legacy program, whose 125-page “Eyewitness: Minnesota Voices on Climate Change” paperback relates stories provided by other Minnesotans.

Marckel brings to her love of the natural world – and to her concerns over climate change – more than 25 years of professional experience developing, implementing, and managing community improvement programs and experiences in the arts, education, and STEM education.

With bachelor’s and master’s degrees in fine arts and in landscape architecture, from Iowa State University and Texas A&M University respectively, she’s a water steward for the Capitol Region Watershed District in the Minneapolis-St. Paul region, a climate ambassador for Climate Generation, and a Climate Reality project leader. Her passions include gardening, family camping, and Nordic skiing in Minnesota’s Northwoods.

Across the lake a summer storm was brewing, giant thunderheads grew, and dark grey-blue clouds were low on the horizon. The winds picked up as sheets of rain fell on the far shores of the lake. These are my memories of a summer storm in the year 2001.

The cool air had moved in, smelling of damp earth, fish, and lake water. Wild, five-foot waves crashed onto the beach, reaching up to the tree line, smoothing the sand with each out-flow. I watched as my young sons and nephew, then ages 4, 7 and 9, raced up and down the beach, screeching in delight as they jumped to avoid each next wave. Precious moments of their childhood two decades ago.

Our summer camp was located on the shores of Leech Lake, a large, clean, deep lake located in the northern lake country and coniferous forests of Minnesota. On each end of our stretch of sandy shore, large boulders lined the lake shore, at the foot of sandy, steep cliffs.

This was a place of family history, a rustic camp compound my parents created almost 55 years ago. They sought a quiet, undeveloped piece of land to settle into for a month each summer, living off the grid. We built shelters and small structures to protect food and supplies. We cooked our meals over an open, raised hearth. We carved rooms in the green understory with the sky as our ceiling – an axe yard, tent sites and a kitchen. We gathered with friends and family around a 10-foot wide wooden spool for our meals, using large upright logs for stools.

So many memorable, amazing experiences. Brilliant, star-filled skies and northern lights reaching from horizon to zenith. Campfires on the lakeshore with storytelling, songs, and roasting marshmallows for s’mores. Long, warm, lazy summer days spent swimming, reading, exploring the woods, and picnics under the great white pines. We built forts and sandcastles, found frogs, crayfish and agates along the shore. Each summer we were captivated by visits from local wildlife – foxes, bears, skunks, raccoons, owls, and a life list of birds.

This was a place where my brothers and I grew up and where we later brought our young families. I assumed that this was a world that would belong to my children and their children. That will not be.

Minnesota’s climate is changing rapidly – parts of the state have warmed by as much as one to three degrees F in the last century. Across the state, higher temperatures are resulting in more extreme storms with intense flooding, and changes to the ecosystems, such as warming surface waters, and loss of fish habitat.

“As the climate warms, northern tree species like paper birch, quaking aspen, balsam fir, and black spruce may start to die out, with populations moving further north. Warmer-climate tree species, like maples, oaks, and hickories could take their place. These changes in tree cover are accompanied by changes in the understory and soil, meaning that habitat for wildlife is changing along with the trees.” (Minnesota Pollution Control Agency, “Effects of climate change in Minnesota,” 2020.)

Warmer winters are shortening the season for much-loved recreational activities. High school Nordic ski and downhill ski teams struggle to find snow to practice and compete. Major pond ice hockey events, a tradition in Minnesota, have been canceled given warmer temperatures and lack of ice.

Northern Minnesota is experiencing warming trends more quickly than the rest of the state, impacting the trees and harming ecosystems by changing the timing of natural processes such as migration, reproduction, and the life cycle of plants.

My father, James Alger, a pastor, writer and poet, has been documenting and reflecting on the woodlands of this area for decades. He too has noted the changes brought about by the changing climate.

Climate change is a reality I must pass on to the next generation. Despite inadequate national leadership, people are waking up – committing to sustainable energy and less impactful ways of living on this Earth. My greatest hopes lie in the voices and actions of our young people, getting involved and demanding change.

I stay hopeful, engaged, and committed to imagining a better world.

People ask me what changes I have seen in my course of life on this planet over the past century. I remark on this as I sit, as I so often do, on the banks of the Red River of the North, between Minnesota and North Dakota.

In the first period I thought that I would live forever. I marked the tenure of humans on the planet as eternal.

At the end of that period someone invented the term “global warming.” I hadn’t noticed it, but I accepted the wisdom of far wiser heads than my own that it was true. We all sat down and read Rachel Carson’s Silent Spring.

During the second period someone invented the term “climate change.” They had television to go with it, and they showed us videos of calving glaciers. I had visited glaciers myself, and had not seen them calving, but I believed that reporters are honest, and that the conclusions of wiser heads were well considered. We all sat down to watch Al Gore’s presentation of An Inconvenient Truth.

During the third period I have become convinced of my own mortality. I have marked the tenure of the human upon the planet at a million years – not much, I admit, considering the tenure of the dinosaurs. However, they were not saddled with the greed of so many to so badly want to equal, or perhaps to surpass a little, what the neighbors have. And, after that, a little more. And a little more, until we risk consuming the planet. And in the process we shroud our own soul, that instrument that has given us a choice, without even knowing what we are doing. In the end, I expect we will wipe ourselves off the planet, and Earth will reclaim and replenish herself.

In all of this, what changes have I seen in my tenure here of 87 years? I have noticed and have been saddened by some losses.

For half a century we lived as a family under canvas one month out of each year, on the shores of Leech Lake. For over a decade I enjoyed the melodies of the redstart on those shores. Then they disappeared, never to return.

I remember elms on those beaches, but then they disappeared, never to be reseeded.

I remember the red-headed woodpecker in central Minnesota. They too disappeared, and I have not seen them since.

I used to thrill to the song of the meadowlark on the prairies.

They have completely disappeared for me, and I miss them.

In sitting in nature and letting her speak to me, I have seen changes constantly. She is far, far older than I, and she has taught me that the one constant I can depend on is change. And so she goes on year after year, decade after decade, thrilling me with her change.

I shall not outlive the dire consequences of our tenure upon Earth, but I only pray that people of good will will cause the consequences to plateau, that we may enjoy this garden to the end of our time.