Could Our Energy Come from Giant Seaweed Farms in the Ocean?

A U.S. agency is funding projects to help create a bioenergy industry based on macroalgae 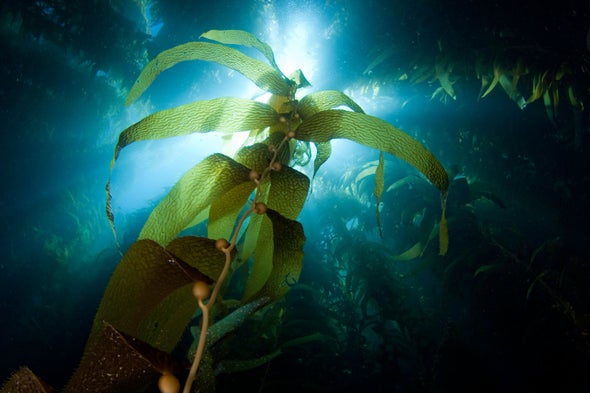 One day in the future, the Pacific Ocean could be home to kilometers of seaweed farms tended by submarine drones and waiting to be turned into fuel. This is the vision of Marine BioEnergy, a start-up backed by the Advanced Research Projects Agency–Energy (ARPA-E). The U.S. government agency is funding the company, along with a handful of related projects, because it views the open ocean as a largely untapped resource for a new and potentially better source of renewable bioenergy.

About 5 percent of total U.S. energy use currently comes from biomass such as corn and wood, which are renewable and absorb carbon dioxide from the atmosphere through photosynthesis as they grow. Many experts expect this percentage to continue rising, largely because of bioenergy’s flexibility. It can, for instance, supply fuel to aviation and other forms of transportation that are hard to electrify. To achieve major decarbonization of the U.S. economy, many analyses suggest bioenergy will need to make up 20 to 25 percent of the country’s energy sources, says Marc von Keitz, a program director at ARPA-E.

Current bioenergy options in the U.S. are dominated by corn-based ethanol. But producing it uses a lot of land, fertilizer and fresh water, which creates other pollution problems and ties up finite resources. As von Keitz puts it, “How do we [meet those bioenergy goals] without compromising the needs of the population and increased food production?” This is where seaweed could come in: it does not need any of those resources and could take advantage of the vast potential of the open ocean. “The ocean is the space that we are not using a lot for cultivation,” von Keitz says. Once harvested, seaweed, also known as macroalgae, could potentially be turned into various forms of energy, such as biogas and ethanol, through different chemical processes. Several hurdles must be overcome to make bioenergy from seaweed an option on a large scale, however. And not everyone agrees it is a good idea because of concerns about possible ecological impacts and unproved climate benefits.

People in various countries, particularly in Asia, have cultivated seaweed for a long time but at a relatively small scale and primarily for use as food. In order for bioenergy derived from macroalgae to become mainstream, researchers and companies need cost-effective ways to convert seaweed into usable fuel for commercial use. They will also need to create the technologies and techniques to farm macroalgae on a massive scale far out in the ocean, where conditions such as storm-driven waves can be brutal. Such remote locations also mean these farms will likely need to operate autonomously or with a very limited human presence to be efficient.

ARPA-E—a Department of Energy agency that supports the research and development of novel energy technologies—thinks these problems can be tackled. It has a dedicated program called MARINER to fund projects that are working on various components needed to jump-start a new seaweed-energy industry: technology and systems for cultivation and harvesting, transportation, selective breeding, and more. For example, MARINER includes a specific category for projects on aquatic monitoring—seaweed farms could have small underwater drones equipped with sensors to track growth and detect damage. Another venture involves an autonomous towing vessel described as a “tractor of the sea,” which could haul supplies or bring in harvested seaweed.

One of ARPA-E’s projects is being carried out by Marine BioEnergy, which aims to build big seaweed farms in the middle of the Pacific Ocean. The project will attempt to address a key problem with the macroalga-farming concept: the top layer of the open ocean has a lot of sunlight but few nutrients, whereas the deeper layers have abundant nutrients but no sunlight. Because of this arrangement, most seaweeds will not grow on their own that far out. Marine BioEnergy thinks it has found a solution: it will try cultivating seaweed on farms attached to submarine drones.

Each farm would span a couple of hectares and would consist of rows upon rows of seaweed, interspersed with floats. The drones would drag the farms underwater at night to access nutrients, as well as during storms or when ships passed by. Every few months, those drones would pull the entire farm to a harvesting location. The drones themselves would run off of energy from solar panels.

Cindy Wilcox, co-founder and president of Marine BioEnergy, envisions deploying enough of these seaweed farms in the ocean to provide a significant amount of energy. “To replace 10 percent of liquid petroleum fuels used in the U.S. today, we would need to have an area under cultivation about the size of Utah,” she says. “There is room in the Pacific for 705 Utahs.”

The company is just beginning to test its idea. Working with a research team at the University of Southern California, Marine BioEnergy ran its first trial last year to see how the giant kelp Macrocystis pyrifera grows when it is pulled up and down the water column. Just off the coast of California’s Catalina Island, researchers attached about 30 test kelp to an anchored buoy system. They used a solar-powered winch to raise and lower a boom that plunged the attached kelp to a depth of 80 meters at nighttime and resurfaced them during the day. Initial results are encouraging: the depth-cycled kelp grew better than the control group, which was kept at a single depth. Marine BioEnergy and the researchers plan to do another, similar experiment, which is tentatively scheduled to begin in early April.

Some experts seem cautious yet hopeful about ARPA-E’s program. “It's an exciting project. It’s very ambitious, and I think it’s absolutely the next logical step to be taking,” says John Bothwell, a seaweed bioenergy expert at the Durham University Energy Institute in England, who is not involved with the ARPA-E work.

Others, however, express skepticism about macroalga bioenergy—and note that growing massive seaweed farms could have unexpected effects on marine ecosystems. “Disrupting natural (or human) food chains on either land or sea will create large ripple effects,” says John DeCicco, a research professor at the University of Michigan Energy Institute, who studies biofuels and other energy issues and is also not involved in the ARPA-E program. For her part, Wilcox says, “I’m not sure we know yet what the potential ecological consequences are. It may just be too soon to tell.” Von Keitz notes that one possible danger is that seaweed farms could have slack lines that entangle marine animals. But he points out that the MARINER program requires its projects to create designs that minimize this risk. For instance, some of the program’s teams are looking at incorporating lines that contain materials such as glass fiber, which would not bend in a way that would cause animals to become entangled, according to von Keitz.

The potential climate benefits of bioenergy are also under debate and may be difficult to calculate for seaweed. ARPA-E is aiming for macroalga bioenergy with emissions reductions that are the same as, or better than, those of land-based biofuels—which would mean a carbon footprint that is less than half of gasoline’s. The idea behind this goal is that even though seaweed would release carbon when it is burned, those emissions would simply be carbon the macroalga had captured as it grew a few months earlier. No new carbon would be released into the atmosphere, as happens with fossil fuels, though the production and conversion of seaweed into bioenergy would still require some energy. Von Keitz adds that if the emissions are captured and stored as the seaweed burns, it would be even better for the climate.

DeCicco, however, says macroalga farming could potentially affect carbon dynamics within the ocean in ways that we do not expect—and that may not be good for the climate. “It will be very difficult, if not indeed impossible, to establish, with any reasonable scientific certainty, that those carbon ripple effects are net beneficial for the atmosphere,” he says. DeCicco notes that industry and researchers will need good data—not just modeling—to prove that macroalga bioenergy will help the climate, and it will be difficult to get accurate enough information on that question. Von Keitz disagrees. He says he has not seen evidence that large-scale seaweed farming would disrupt the carbon cycle in a way that would harm the climate.

The mere possibility of lower carbon emissions makes seaweed bioenergy worth exploring despite the unknowns, some experts say. “We’ve got a big problem on our hands: climate change,” says Andres Clarens, an associate professor of engineering systems and environment at the University of Virginia, who is not involved in the ARPA-E projects. “I don't think there’s a silver bullet or that macroalgae will be [what] saves us. But it could be part of the solution.”