Like Exxon, the coal industry knew that its product would cause climate change and has tried its best to hide this fact

A 2015 exposé by journalists at InsideClimate News, the LA Times, and Columbia University revealed that Exxon Mobil scientists performed experiments and conducted models in the 1970s that showed greenhouse emissions would trigger climate change. Despite their memos, Exxon’s leadership minimized the findings and would later invest hundreds of millions in front groups that denied the link between CO2 emissions and the climate emergency.

Now, a new investigation by the Huffington Post shows that the other side of the fossil fuel industry, namely coal, also had early insight into the association between the product of their business and global warming.

Documents obtained by the Post’s Élan Young showed that prominent coal industry members knew about the climate-altering effects of massive amounts of CO2 dumped into the atmosphere from as early as 1966. Like Exxon, coal companies not only hid this information but actively fought to manipulate the public opinion into thinking otherwise. In some cases, the lobby and coal-sponsored front groups would employ rhetoric that claimed CO2 emitted by coal-related activities was actually beneficial to the environment — believe it or not. 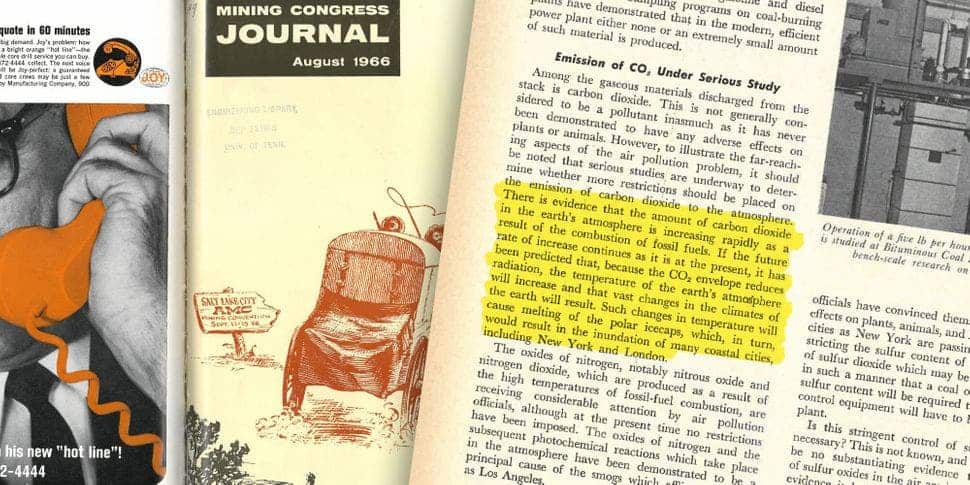 An article in the 1966 issue of the Mining Congress Journal noted that rising greenhouse gases emitted by coal activities could lead to changes in the climates of the earth. Credit: Chris Cherry

Young draws attention to a 1966 article in the Mining Congress Journal, a coal industry publication, authored by James R. Garvey, who at the time was the president of Bituminous Coal Research Inc., a now-defunct coal research organization.

“There is evidence that the amount of carbon dioxide in the earth’s atmosphere is increasing rapidly as a result of the combustion of fossil fuels,” wrote Garvey. “If the future rate of increase continues as it is at the present, it has been predicted that, because the CO2 envelope reduces radiation, the temperature of the earth’s atmosphere will increase and that vast changes in the climates of the earth will result.”

“Such changes in temperature will cause melting of the polar icecaps, which, in turn, would result in the inundation of many coastal cities, including New York and London,” he continued.

In other words, this is a fairly accurate description of modern climate science findings, which draw a strong link between man-made greenhouse emissions and temperature rise.

In the same journal, James R. Jones, a Peabody Coal engineer, notes that the coal industry was merely “buying time”.

“We are in favor of cleaning up our air,” he wrote. “Everyone can point to examples in his own community where something should be done. Our aim is to have control that does not precede the technical knowledge for compliance.”

Just like Exxon scientists decades go, these 1960s coal industry representatives were straightforward about the reality and perils of climate change. The stakes weren’t so high for these company’s shareholders at the time and once it became apparent that regulations meant to dent emissions — and by extension, their business — the coal industry engaged in intentional lobbying and campaigning meant to monkey-wrench climate action.

Peabody Energy, the largest coal producer in the United States, has funded dozens of front groups that misrepresent climate science in order to polarize the public and delay climate action. They even went as far as spreading lies that borderon insanity.

“While the benefits of carbon dioxide are proven, the alleged risks of climate change are contrary to observed data, are based on admitted speculation, and lack adequate scientific basis,” the company wrote in a letter in 2015 to the White House Council on Environmental Quality. 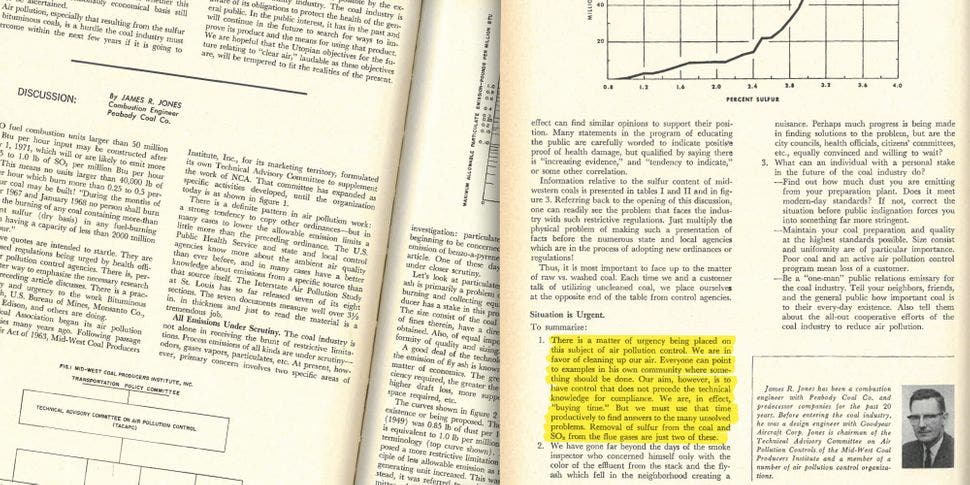 Whether or not representatives of the coal industry, such as Peabody, might face similar consequences remains to be seen, although the parallels are striking. And, like Exxon, the coal industry knew that its product would cause climate change and has tried its best to hide this fact.

In any event, a major fraud investigation against coal representatives could be like a final nail in the industry’s coffin. For years, coal has been tanking despite the Presidential Administration’s promises of revival. In 2016, Peabody Energy filed for bankruptcy. Alpha Natural Resources, the second biggest coal company in the US, filed for bankruptcy along with other smaller firms in 2015.

In its defense, Exxon says the lawsuit is politically motivated and driven by anti-fossil fuel activists. The company says it was honest with shareholders about how it calculated carbon costs, dismissing any wrongdoing.

“The New York Attorney General’s allegations are false,” Steven Soper of Exxon’s Corporate Media Relations said to PBS. “We tell investors through regular disclosures how the company accounts for risks associated with climate change. We are confident in the facts and look forward to seeing our company exonerated in court.”