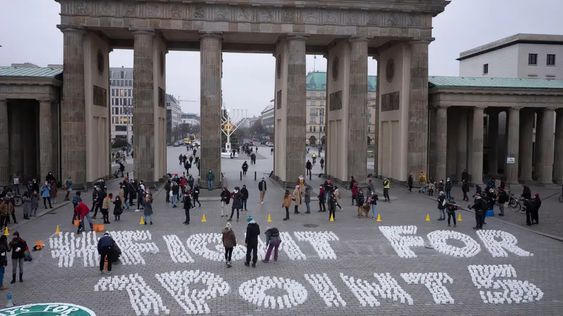 Students set up candles for the slogan “Fight for one point five” during a protest of the Fridays For Future movement at the Brandenburg Gate in Berlin.Photo: Markus Schreiber (AP)

In a crucial ruling, a high court in Germany has agreed with young activists that the country’s climate law is unconstitutional because it puts too much of the burden of solving climate change on future generations. Judges in the Karlsruhe court, the highest court in the country, ordered the government to update its climate law and set much a clearer emissions reduction goal by the end of next year.

The ruling issued on Thursday was in response to a lawsuit brought by nine young climate activists—“some of whom are very young,” the court noted—supported by green groups including Fridays for Future and Friends of the Earth Germany. The suit challenges the country’s 2019 climate law that sets a target of reaching net zero emissions for the whole country by 2050.

“We are super happy with the court’s decision,” 22-year-old Sophie Backsen, one of the plaintiffs in the suit, told reporters at a news conference. Backsen’s parents own a farm North Sea island of Pellworm, and she said that sea level rise was threatening the farm and her future inheritance. “Effective climate protection has to be implemented now and not in 10 years’ time when it’ll be too late.”

The 2019 German law in question makes several specific suggestions to curb emissions in multiple sectors to get to a 55% reduction by 2030. But the targets and goals laid out in the law get much murkier after that. This lack of direction, the suit says, puts a big burden on generations who will grow up and have to clean up the mess their parents left behind. (The original law said more specific decisions about how to implement cuts past 2030 would be made in 2025.)

The current reductions in place, the court said, shift too much of the responsibility for reaching the goals of the Paris Agreement on younger generations, which “simultaneously means following generations are left with a radical reduction burden and their lives are exposed to comprehensive limits to freedom.” In the ruling, the court also acknowledged for the first time that Germany has a specific carbon “budget” in place it needs to stay within to meet the goals of the Paris Agreement—and that it could meet that budget by as early as 2030 on the path the country is currently on.

“The court focuses on the civil liberties of future generations, saying those rights are being infringed already today,” said Roda Verheyen, a lawyer for the plaintiffs. “This isn’t vague, but a very clear decision about fundamental rights.” Verheyen also pointed out that the country’s mandate to phase out coal use by 2038 would almost definitely have to be moved up following the ruling.
The U.S. could probably take a note to listen to Germany and think about how its current climate commitments impact the fundamental rights of its young people. In March, the Biden administration asked a court to toss out a six-year-old suit brought by 21 young people against the federal government, which charges the government with depriving the young people of their constitutional rights by failing to act on climate change.