NOAA just released its most recent State of the Climate Report, testifying that, in August alone, the United States endured four billion-dollar disasters, including calamitous hurricanes in the Southeast, ravaging wildfires in the West, and an extraordinary derecho in the Midwest. 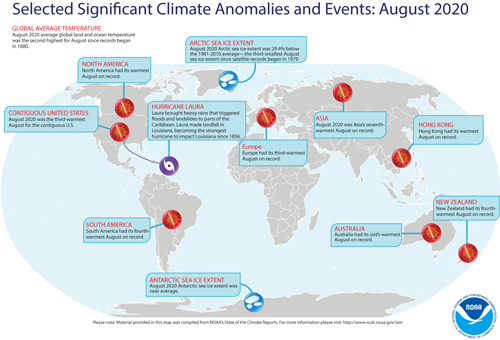 Recent heatwaves in the Western part of the country brought temperatures up to 131 degrees in Death Valley (the hottest temperature ever reliably measured on Earth), creating a literal tinderbox from which three of the four largest wildfires in California’s history sparked.

Now, more than 330,000 acres are burning in Washington State (more than in the last 12 fire seasons combined) and California has set a record of 2.3 million acres scorched.

With each passing year, more heat, fire, flooding and superstorm records are broken, and scientists predict that we’re trending ever-faster towards greater extremes.

Predictions that scientists made for 2030, 2040, and even 2050 are happening now. Catastrophic natural events continue to occur more frequently and ferociously than ever before, and there is little doubt that we’re witnessing a dramatic acceleration of climate activity.

As towns from coast to coast are charred by wildfire, flooded by superstorms, and drowned by rising sea levels, the number of climate refugees soars. Millions of people who live on the front lines face the heartbreaking question of whether to rebuild or wholesale abandon the communities they love.

Which begs the question: how much suffering does it take to break a human spirit?  How much accumulated trauma needs to be inflicted to force someone from their community?  How devastating do the wildfires, storm surges, and temperature extremes have to become before the people trickle out, one tired family at a time?

This is the ultimate obfuscation of climate change: it alters our reality, changing the people and places we inhabit ever so slowly until something drastic occurs, delivering us into an ocean of uncertainty.

And make no mistake—climate change has taken its gloves off. Scientists predict with certainty that we’ll see more heat and extreme climate activity in at least seven of the next 10 years.

While the staggering level of post-disaster human anguish is not qualifiable, the financial costs are certainly calculable. NOAA estimates that the United States has incurred nearly $2 trillion in losses from natural disasters since 1980.

With the increasing intensity and frequency of climate events, policymakers are feeling an express urgency to corral costs, which brings us to the inevitable question: If there isn’t enough money to protect and rebuild every community impacted by climate change, which ones get salvaged and which are abandoned? Who makes the ultimate decisions, and how will those decisions be made?

Some communities, even sizable ones, will need to be abandoned. Moving forward, policymakers will be forced to decipher between winners and losers in the race to adapt to climate change. The cities that are quick to adapt to climate risks will attract the jobs and the factories of the future, and those that drag their feet will be left behind.

The floodgate has opened, and we find ourselves in uncharted territory.