Carbon emissions are shrinking the stratosphere

Scientists warn that the stratosphere could lose 4% of its thickness by the end of the century.

The stratosphere, the second layer of the atmosphere as you go upward, is 400 meters thinner than it was in the 1980s. The culprit has been identified as greenhouse gas emissions, according to a new study that estimated the stratosphere will lose another kilometer by 2080 if current growing emissions trends continue unabated. This could significantly hamper satellite operations, GPS navigation, and radio communications, the authors of the new study warned.

The paradox of stratospheric cooling 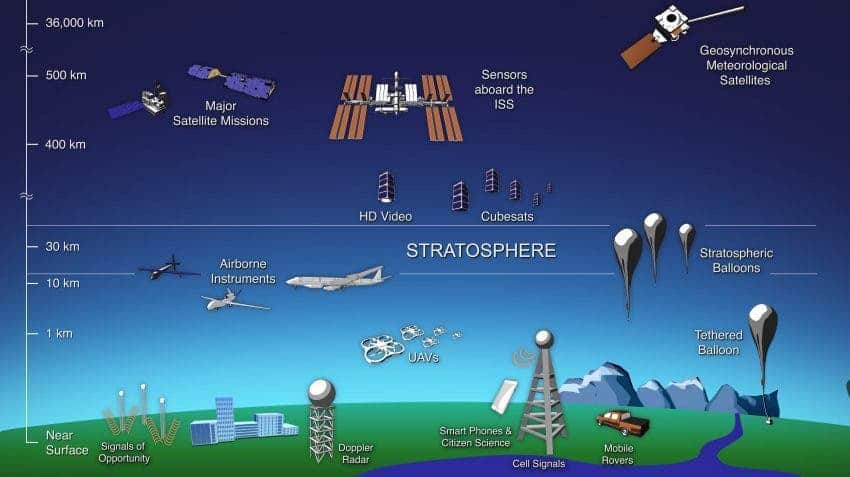 Due to the copious amounts of greenhouse gases released into the atmosphere, the planet’s climate system has been significantly altered. Earth’s surface is now a full one degree Celsius hotter, on average, than it used to be during the Industrial Revolution in the 19th century. Likewise, carbon emissions absorbed by the ocean have severely altered it, making it more acidic. Ocean pH dropped from 8.2 to 8.1 since the Industrial Revolution and is expected to become even more acidic by 0.3 to 0.4 units by the end of the century.

Earth’s climate system is a complex fabric of interwoven fibers, so the effects can be far-reaching. Glaciers have shrunken, ice on rivers and lakes is breaking up earlier, plant and animal ranges have shifted and trees are flowering sooner.

But, while carbon dioxide heats the troposphere, the first 20 km layer of the atmosphere where humans and all other living things are found, it has the opposite effect on the stratosphere.

More CO2 actually cools the stratosphere, where temperatures have dropped by between 5 and 10 degrees Celsius during the past three decades. The science of stratospheric cooling is rather complex, but according to  Dr. Elmar Uherek of the Max Planck Institute, human activity affects this phenomenon in two major ways: ozone depletion and increasing carbon dioxide.

At stratospheric heights, CO2 enhances the dissipation of heat radiation into the void of space, whereas in the troposphere it traps heat. As a result, the stratosphere — which starts around 20 kilometers from the Earth’s surface at the equator and is around 40 kilometers thick — is contracting.

In a new study published this week in the journal Environmental Research Letters, an international team of researchers from the Czech Republic, Austria, Germany, and the USA, quantified stratospheric cooling using data gathered by a small fleet of satellites since the 1980s. The results proved shocking.

“Here we show that this atmospheric layer has contracted substantially over the last decades, and that the main driver for this are increasing concentrations of greenhouse gases (GHGs). Using data from coupled chemistry-climate models we show that this trend will continue and the mean climatological thickness of the stratosphere will decrease by 1.3 km following representative concentration pathway 6.0 by 2080,” the researchers wrote.

Previously, stratospheric shrinkage had been linked to ozone depletion but this study shows that, in fact, CO2 accumulation is to blame. A thinner atmosphere may affect satellite trajectories, the propagation of radio waves, and the performance of GPS.

It’s remarkable that scientists still find new effects of climate change after all these years. It shows how complex the planet’s climate system is, suggesting that there are perhaps other important changes our emissions are inflicting on the atmosphere which we don’t know yet. Study co-author Juan Antonio Anel of the University of Vigo in Spain said the results provide new evidence that human activity is disrupting “the fragile balance of our planet.”

In the future, monitoring the thickness of the stratosphere could provide a new yardstick for tracking climate change.