MONTPELLIER, France — As the world warms due to climate change, winemakers are struggling to maintain the quality of their product. But in the home of wine, agroforestry researchers are showing that growing “vines among the pines” can help growers adapt.

Higher average temperatures speed up the ripening of grapes, which leads to lower acidity and increased sugars in the fruit, yielding higher alcohol levels in wine and altering other compounds in grapes that affect aroma and flavor.

“Wines are becoming fuller-bodied, more alcoholic, and riper in flavor,” as one Italian grower told Bloomberg in late 2019, and this is a problem for winemakers who want to market particular wines with established characteristics.

As the climate warms, this is becoming increasingly difficult and the best growing regions for many kinds of grapes are shifting northward toward the U.K., Germany and Sweden, in Europe’s case, and toward the Pacific Northwest from California in the U.S. Growers typically can’t move their vineyards, though, so some are opting to grow new grape varieties that are more tolerant to heat or drought. 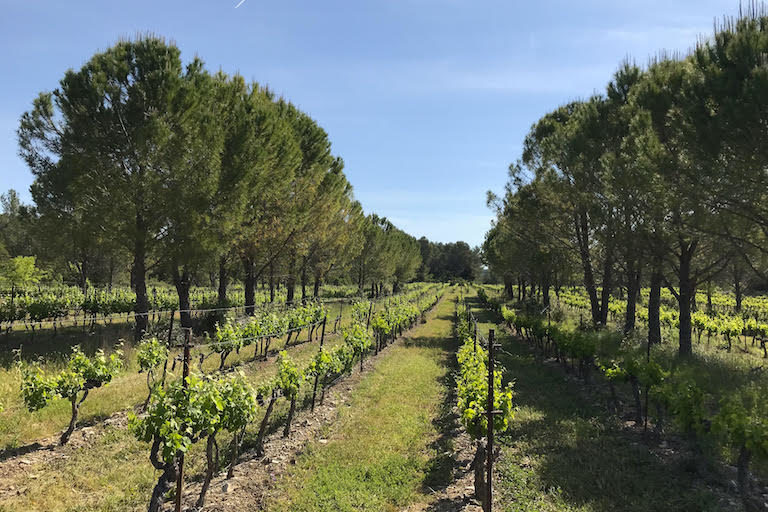 A study that recently made headlines worldwide suggested the growing of such varieties of grapes to ensure the future of wine. But this requires winemakers to learn how to grow new kinds of grapes, and to therefore produce different styles of wine.

In southern France, though, where ripening time is now two to three weeks earlier than just 50 years ago, some growers are adapting by keeping their traditional varieties from ripening too soon simply by growing trees.

In May 2019, I toured the experimental farm at Restinclières to see research underway in agroforestry — the growing of woody perennials like trees in combination with annual crops and fruits, in a system that increases cooling and moisture levels while sequestering atmospheric carbon — from wine grapes to grains and fruits. The visit was part of the World Agroforestry Congress in nearby Montpellier, where the organization that conducts much of France’s agricultural research, the National Research Institute for Agriculture, Food and Environment (INRAE), is located.

Trellised in rows between lines of taller trees spaced several meters apart, the Syrah and Grenache vines are studied to understand if ripening can be delayed via the shading, wind-breaking, and evapotranspiration effects of the trees, once they’ve grown tall enough. This growing of crops between rows of trees is called alley cropping, and is one key technique of agroforestry.

Curious to know how these agroforestry-grown grapes performed after I saw them in the spring, I contacted INRAE senior researcher Christian Dupraz.

“The 2019 harvest was very good, high quality,” he said during a recent Skype interview. As the founder and coordinator of agroforestry research at Restinclières, called Programme Intégré de Recherche en Agroforesterie à Restinclières dans l’Hérault (PIRAT), he personally planted the vines here back in 1996 and coordinates on-site research to this day.

This was a very good result indeed since the region experienced a heat wave in late June that hit 44° Celsius (111° Fahrenheit) in the shade, causing many vineyards in the region to be damaged (both leaves and grapes were “burned”) — but not at Restinclières, likely due to the presence of the trees. 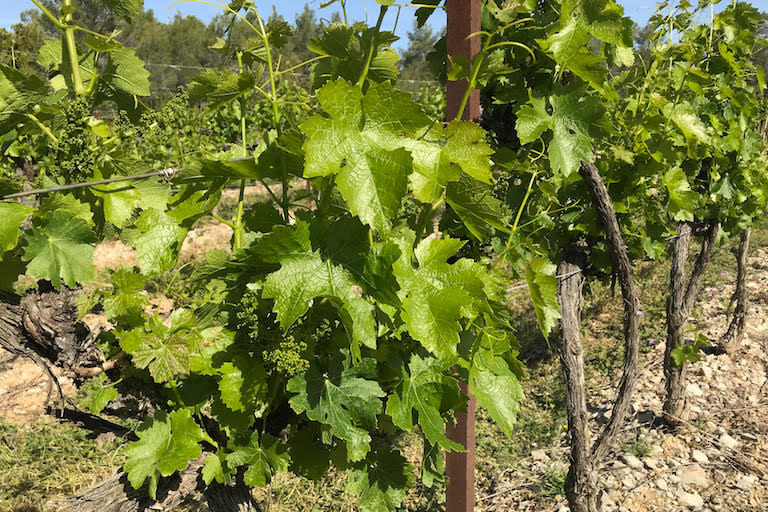 Both Syrah and Grenache grapes are studied in the agroforestry system. Image by Erik Hoffner/Mongabay.

If that is a result of the trees, says Dupraz, “This would be an excellent incentive for vineyard agroforestry … and three years ago we had a late frost and among the trees we had no frost damage.” Of that latter event, I was told during my visit that some vineyards elsewhere in the region had entirely lost their crops, and it was suggested that Restinclières went unscathed perhaps due to the trees creating a microclimate of slightly warmer air from infrared radiation from the tree canopies.

Beyond protection from extreme weather events, the main role of trees is to delay the grapes’ ripening, of course, and Dupraz confirmed that their seasons have indeed been extended enough to benefit from the cooler nights of September, avoiding the August ripening that most vineyards are experiencing there, and therefore deliver a better-quality product.

But does the trees’ shade lead to lower yields, I wondered? No, Dupraz said, “Yield of the vineyards is almost the same in agroforestry and the controls. The difference is very small so far … the vines closest to the trees on the north side have a slightly lower yield, but not much.”

For some reason, P. brutia has been shown to damage the vines, perhaps via allelopathic chemicals, but P. pinea has proven beneficial. In fact, the latter pine and other trees provide habitat for beneficial insects, too, which prey on mites that damage the nearby vines, suggesting another benefit to incorporating trees in vineyards.

Other pluses noted by Dupraz are a lower incidence of mildew among the alley-cropped vines, plus higher levels of acidity and tannin inside the grapes, which is very positive for the quality of wine produced. If growers were able to sell carbon credits for incorporating trees into their farms, this also could increase the economic resilience of vineyards. 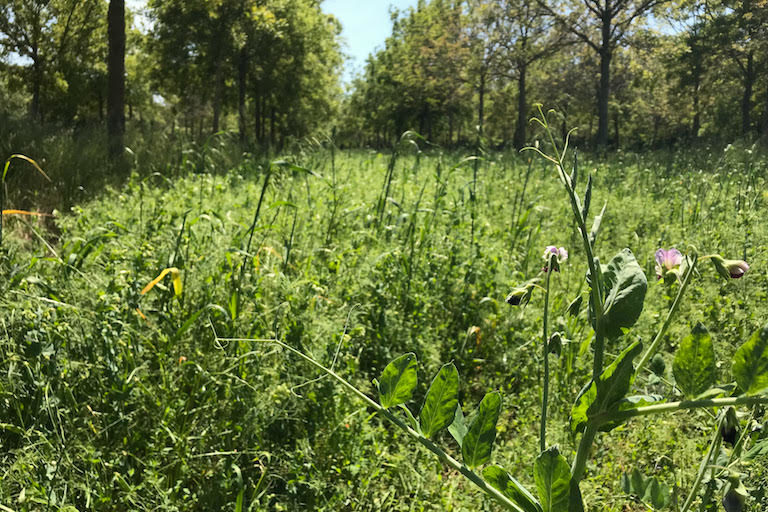 Annual grains, forage crops, and peas, pictured, are also studied to understand if they benefit from being grown in alley-cropped agroforestry systems. Image by Erik Hoffner/Mongabay.

While climate change adaptation of wine grapes may be the most exciting of the projects here, this is not the only research being undertaken: also noted in 2019 were durum wheat, alfalfa, and lush expanses of peas growing among rows of trees, the latter of which, despite artificial drought conditions introduced by Ph.D. researcher Guillaume Blanchet, were proven to yield better in the trees’ shade versus in the sun.

This year Dupraz reports that barley is being similarly studied for drought benefits in plots intercropped with hybridized American/European walnut trees. While the result is so far unknown, the crop is destined to become beer, suggesting that the ingredients for a diversity of popular beverages may be grown among trees in the future.

This report is part of Mongabay’s ongoing coverage of trends in global agroforestry, view the full series here.