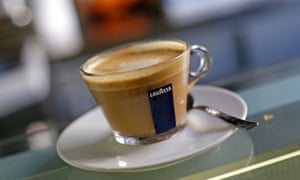 The first compostable one-cup coffee pods from a major manufacturer will go on sale this week in a battle to stop the 20bn pods used every year around the world from ending up in landfill.

Italian espresso giant Lavazza is aiming to replace its entire range of home use capsules with new eco-friendly ones – at the same retail price – by the end of the year.

It is thought that 95m cups of coffee are drunk in the UK every day, but increasingly popular single serve pods have become an environmental scourge – typically ending up in landfill where they can take up to 500 years to break down. The 20bn capsules currently consumed every year are enough to circle the Earth 14 times.

The complexity of packaging - often a mix of different materials such as plastic, foil and aluminium – combined with used coffee dregs – can make them difficult to recycle and process in standard municipal recycling plants.

Lavazza says its new biopolymer-based Eco Caps break down into compost in as little as six months when combined with food waste for council collection. Provided local authority rules allow it, used capsules could be thrown in the food waste bin.

However, where this is unavailable, Lavazza has teamed up with waste collection service TerraCycle to establish a network of public access drop-off points for consumers to dispose of capsules which need to be industrially composted.

Its new research, also published on Monday, shows that more than a third of people in the UK admit to throwing their used coffee capsules into the bin because they don’t know how to properly dispose of them. Consumers also feel generally confused about what can and cannot be recycled, with 72% admitting to feeling overwhelmed when trying to understand the various recycling symbols.

The coffee company Nespresso – part of the Swiss multinational Nestlé – encourages consumers to send back their used aluminium capsules in the UK in special bags while it has also trialled council collection schemes.

Most compostable or biodegradable pods on the market have been launched by small, niche brands. A separate range of 100% compostable pods made from sugar cane and paper pulp, made by online retailer Halo, can be put into home compost or food bins. Halo co-founder Richard Hardwick said: “The coffee revolution has happened and one of the key challenges the industry now faces is the millions of tonnes of waste created as a result.

“Aluminium and plastic coffee capsules are difficult to recycle so most of them end up in the bin, and that’s why up to 75% are currently being sent to landfill every minute. Most people don’t understand the irreversible damage these coffee capsules are inflicting on the planet.”