Melati and Isabel Wijsen began campaigning to reduce plastic waste in Bali seven years ago. Now 19 and 17, they say the pandemic shows that stark measures to protect the planet are possible.

Melati and Isabel Wijsen, the founders of Bye Bye Plastic Bags, in Bali, Indonesia, in February.

SEMINYAK, Indonesia — It was trash season on Bali, the time of year when monsoon storms wash up tons of plastic debris onto the island’s beaches. It was also the time for two teenage sisters, Melati and Isabel Wijsen, to organize their annual island cleanup.

Standing on the back of a flatbed truck, megaphones in hand, they kicked off a day of trash collecting at 115 sites around the island. Thousands of people came out to help.

“Not only the beaches, we clean up the rivers, we clean up the streets,” Melati Wijsen called out on that February day to an early-morning crowd of hundreds of volunteers, many wearing shirts with the logos of local restaurants and hotels. “This movement is for everyone in Bali.”

Melati was 12 and Isabel was 10 when they began a drive to ban plastic bags, at one point threatening a hunger strike to get the Bali governor’s attention. Now, seven years later, they have become local heroes and won international acclaim for their campaign, which resulted in Bali banning plastic bags and other such items that are intended for a single use.

The sisters, now 19 and 17, are part of a young generation of global activists, including the 17-year-old Swedish climate-change advocate, Greta Thunberg, calling for urgent action to protect the planet.

Since starting their campaign, the sisters have traveled around the world to speak at major events. At 15 and 13, they gave a Ted Talk in London on Bali’s trash crisis. Time magazine listed them among the Most Influential Teens and CNN applauded them as Young Wonders.

Melati describes herself as a “change maker” and has been more visible in recent months, while Isabel has focused on finishing high school and taking care of her health after discovering that she has an autoimmune disorder. 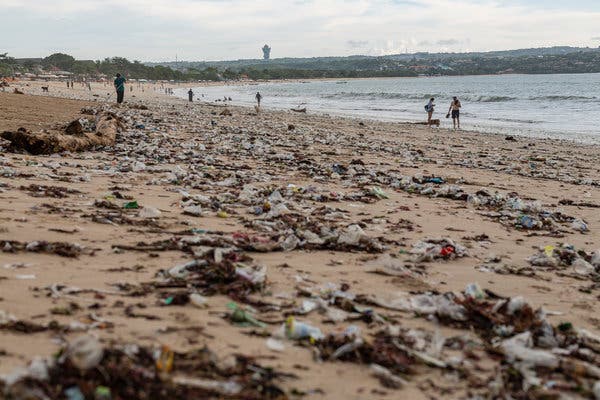 Litter on Kedonganan Beach in Bali early this year. In late 2017, the government declared a “garbage emergency” along some of the most popular tourist beaches.