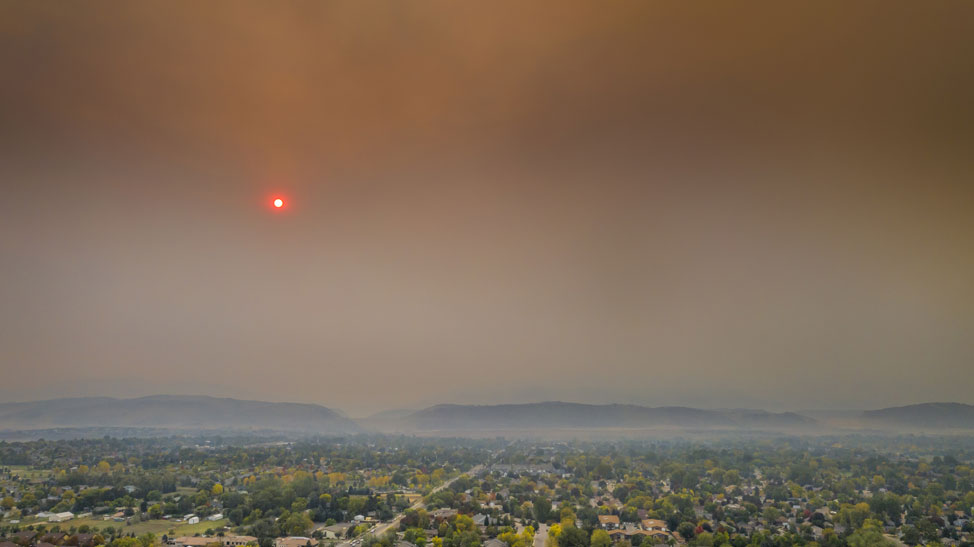 FORT COLLINS, CO. – Where I live there’s a spectacular gradient of climate and vegetation extending from the semi-arid grassland around cities (5,000 ft / 1.5 km) where five-million people live to the tundra and snowfields along the Continental Divide (13,000 ft / 4 km) above sea level.

In the past decade, wildfire has burned up the whole damned thing!

In the sweltering summer of 2012, we were besieged by the High Park fire. My mother died of chronic obstructive pulmonary disorder that summer, her lungs ruined by a lifetime of cigarettes and weeks of wildfire smoke.

Now, in the upper reaches of the currently raging Cameron Peak fire scar, the stinging spindrift of the coming winter has begun swirling among the lichen-covered boulders. Tundra and krumholtz have frozen, and the landscape is shutting down for imminent burial in wind-driven snow. In the foothills outside the city, firefighters sweat through soot to clear brush, protect subdivisions, and hose down the dry summer grass.

Never before in my lifetime has the entire tundra-to-prairie burned like this. Compare the sizes of the recent fire scars to the ones on this map from earlier years.

There are three necessary conditions for wildfire: fuel, ignition, and dry soil. Over the past 50-plus years in this region, fuel and sources of ignition – for instance lightning and campfires – have not been lacking. What’s changed is the weather.

Nearly all the soil moisture in our mountain forests comes from the melting of the winter snowpack, especially above about 8,500 feet. Rain provides precious little of the water.

Every single day from “mud season” until the snows start piling up again in October, the forest extracts water from what was stored during spring snowmelt. On hot days it extracts more, and on cold days less. The forest thrives only on the acres where tree roots stay damp until the weather turns cold.

The hotter the days, and the longer the warm season between snows, the more days there are at the end of the season when all that abundant fuel is susceptible to a lightning strike or a campfire gone wrong.

Unlike the Ents in Lord of the Rings, our trees didn’t just get up and walk up the mountains. Rather, the poorly adapted ones slowly died out and were replaced by the seedlings of their better-adapted neighbors as the warming slowly crept up the slopes over many millennia. The cone doesn’t fall far from the tree.

By the time today’s toddlers in their 70s, our climate could very easily heat up just as much as it did in 100 centuries during the last great warming. That’s 100 times faster than the last warming. It’s less than the lifetime of a single tree, and way too fast for seedlings to displace their ancestors.

When the climate moves out from under the forest so quickly, the trees don’t just get up and walk uphill.

Instead they just burn down.

https://yaleclimateconnections.org/2020/10/a-climate-scientists-personal-encounter-with-nearby-colorado-wildfire/?ct=t(EMAIL_CAMPAIGN_WEEKLY_101920)
Use left/right arrows to navigate the slideshow or swipe left/right if using a mobile device