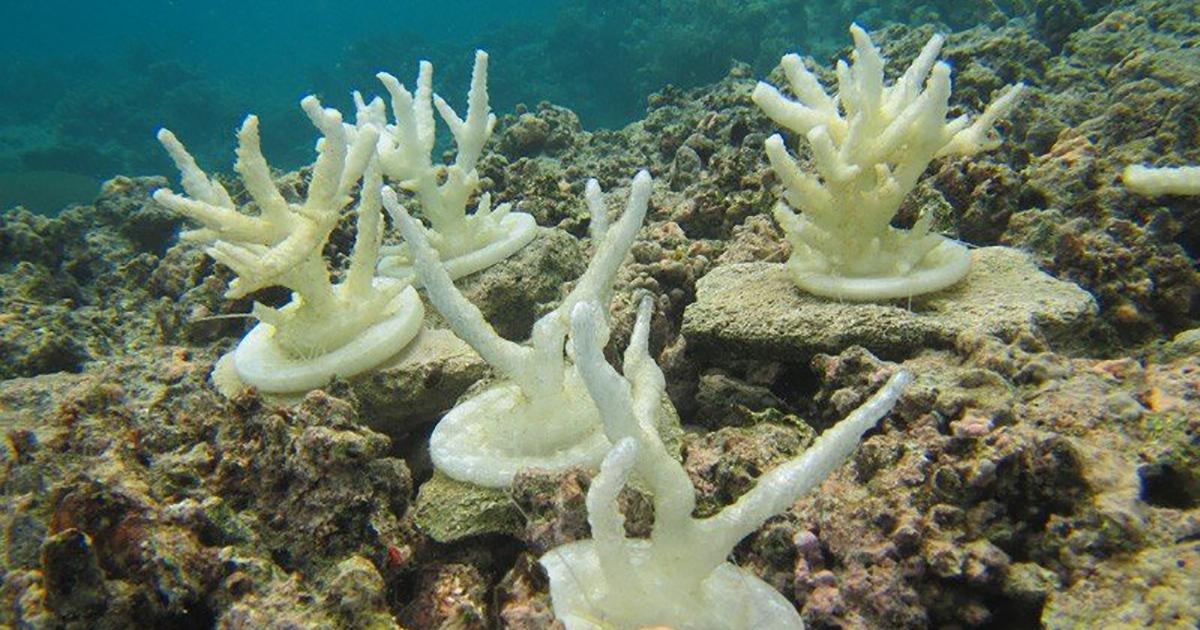 Shown here are 3D-printed coral models of Acropora formosa, a type of coral found in the Indian and Pacific Oceans. The 3D printed models of differing complexity were secured to an area of a reef with low-complexity, then observed to understand which habitat the fish preferred. Credit: University of Delaware

Natural disasters such as hurricanes often leave devastation in their wake. Residents living in affected areas are sometimes displaced or require temporary shelter while their homes -- or even neighborhoods -- are repaired or rebuilt.

But what if you are a fish and your home is a coral reef?

Researchers across the globe are searching for ways to help endangered reefs, and the animals that live there, withstand or recover from weather events, including bleaching and storms that can occur with increasingly warmer water temperatures.

One idea is to use 3D-printed coral models to replace or supplement coral reef systems that have been affected.

New research by the University of Delaware's Danielle Dixson and UD alumnus Emily Ruhl has shown that 3D-printed objects do not impact the behavior of coral-associated damselfish or the survival of a settling stony coral.

Further, the study demonstrated that fish showed no preference between materials used to 3D-print artificial corals, opening the door to using environmentally friendly materials, such as biodegradable cornstarch instead of plastic.

With mounting concerns about plastic pollution in the marine environment, it is timely evidence that can support environmentally conscious decisions about what is put in the ocean. 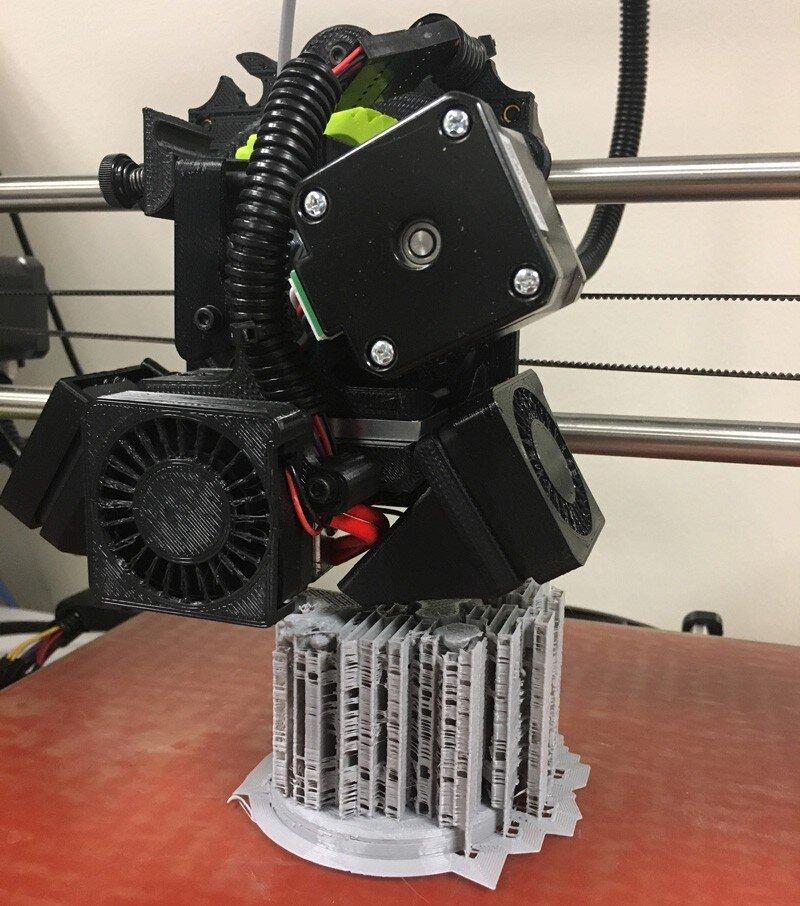 UD researchers cast the coral models using a 3D-printer, filaments made from different materials and a special mold created from images of an actual coral skeleton. Credit: University of Delaware

The researchers reported their results in PLOS One, a peer-reviewed open source journal.

Like others studying this problem, Dixson and Ruhl are looking for ways to keep the right animals on a reef after an emergency to fuel recovery. One important consideration is knowing that any 3D-printed material used won't harm coral or negatively affect fish behavior.

"If the fish on a reef won't use the 3D-printed coral models as a habitat in the wild, it could place them at greater risk for predation by other larger species," said Dixson, an associate professor in UD's College of Earth, Ocean and Environment's School of Marine Science and Policy. "If coral larvae won't settle on 3D-printed materials, they can't help to rebuild the reef."

In laboratory experiments, the researchers studied the behavior of damselfish and mustard hill coral larvae in the presence of a coral skeleton and four 3D-printed coral models made from different filaments. Blue-green damselfish (Chromis viridis) are a common coral-associated fish found in the Indian and Pacific Oceans, while mustard hill corals (Porites astreoides) are a stony coral found in the Caribbean Sea.

The 3D coral models were made by replicating a coral skeleton using 50 iPhone images of the coral taken from all angles and a 3D printer. The researchers 3D-printed four different artificial coral models from low-cost, widely available filaments, including polyester and two biodegradable materials, one made from cornstarch and another made from cornstarch combined with stainless steel powder.

The researchers placed the damselfish into a fish tank loaded with the coral skeleton and the four artificial habitat options, in what is known as a cafeteria-style choice experiment, and studied whether the fish preferred one habitat over another.

Behavior analysis showed the damselfish did not display a preference between the native coral skeleton and the 3D-printed coral materials. The fish's activity level, such as frequency of movement and distance the fish traveled in the tank, also remained unchanged regardless of what coral habitat they were provided.

Ruhl said she was surprised that the fish behaved the same near artificial coral even with a natural coral skeleton present.

"I thought the natural skeleton would elicit more docile (that is, accepting) behavior compared to 3D-printed objects," said Ruhl, who earned her master's degree in marine biosciences at UD in 2018. "But then we realized the small reef fish didn't care if the habitat was artificial or calcium carbonate, they just wanted protection."

The researchers' lab experiments also revealed that mustard hill coral larvae settled at much higher rates on 3D-printed surfaces compared to having no settlement surface at all, which could occur if a reef were flattened in a storm.

This is promising news since both reef-associated fish and coral are vulnerable animal species, making them a good proxy for understanding how other reef organisms will respond to 3D-printed materials in the open ocean.

As coral reefs degrade, they often lose structural complexity, which is a problem for reef-associated fish that rarely move more than 15 feet from home in their entire lives. Without proper habitat, coral reef associated juvenile fish don't grow up to be bigger fish, and without bigger fish that feed on competitive algae, the algae can overgrow live corals, causing destruction and placing the whole ecosystem at risk.

In ongoing work, the researchers are analyzing field data from Fiji where they deployed 3D-printed coral and tiles made from biodegradable cornstarch filaments after determining they were safe to use. They are analyzing what settled on the artificial tiles, with an eye toward methods that would support conservation efforts.

"Offering 3D-printed habitats is a way to provide reef organisms a structural starter kit that can become part of the landscape as fish and coral build their homes around the artificial coral," Dixson said. "And since the materials we selected are biodegradable, the artificial coral would naturally degrade over time as the live coral overgrows it."

In addition, 3D-printed coral models can be useful as a control for fish-related laboratory studies, enabling researchers to provide each fish an identical habitat, something that is currently not possible with the use of coral skeletons, Dixson said.

Ruhl, who conducted the original research with Dixson as a UD graduate student, is now a research biologist with the U.S. Army Corps of Engineers' Engineer Research and Development Center in Mississippi. There, Ruhl studies freshwater fish behavior and cognition to find ways to mitigate invasive species, such as Asian carp. It's a role she snagged with the help of fellow CEOE alumna Kaytee Pokrzywinski, illustrating the power of the Blue Hen alumni network. In the future, Ruhl would like to become an officer with the National Oceanic and Atmospheric Administration (NOAA) Corps.

Story by University of Delaware, 17 October 2019