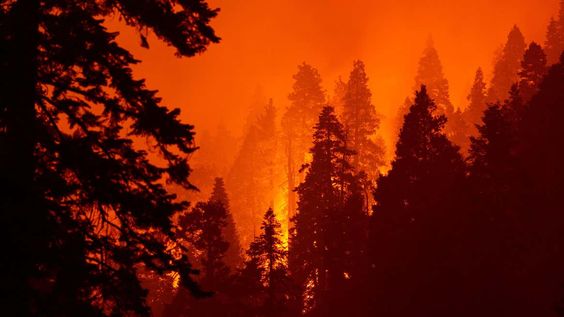 The climate crisis has put sequoias on a dangerous path. A draft report from the National Park Service indicates that 10% of the largest trees in the world were wiped out in last year’s Castle Fire.

Sequoias can live for thousands of years. Trees alive today are our connections to deep time. As Christianity rose, the Han Dynasty collapsed, and countless other human activities proliferated around the world, sequoias still alive today silently rose to towering heights in isolated pockets of California’s Sierra Nevada. To stand in the shadow of a giant sequoia is to feel the heft of history drape over you.

Yet humanity’s most lasting legacy, which began during the Industrial Revolution, might be contributing to their downfall. Climate change coupled with a freak August lightning storm lit the Castle Fire. It was one of a number of explosive wildfires that stretched California’s fire resources to the brink in 2020. The firestorm caused widespread destruction, and the new draft report, shared with the Visalia Times Delta, shows we’re still getting a handle on just how much we’ve lost.

The report is based on preliminary data that shows between 7,500 and 10,000 of the giant trees were destroyed. That translates to between 10% and 14% of all sequoias in the world disappearing in one inferno. The same fire is also responsible for a sequoia that continued to burn and smolder throughout the winter. While not all the trees lost were 3,000-year-old behemoths, even relatively young trees going up in smoke is a huge blow to the health of sequoias going forward.

“Not much in my life in the natural world has made me cry, but this did,” Nate Stephenson, a research ecologist for the U.S. Geological Survey who works in the park and has been studying sequoias for years, told the San Francisco Chronicle. “It hit me like a ton of bricks.”

Christy Brigham, chief of resources management and science at Sequoia and Kings Canyon National Parks, was equally blunt in her assessment of just how terrible the situation is. She told the Times Delta, “I cannot overemphasize how mind-blowing this is for all of us. These trees have lived for thousands of years. They’ve survived dozens of wildfires already.”

The difference between fires of the past and what happened last year is one of intensity. Sequoias are fairly well adapted to ground-level burning, which actually helps the trees by clearing out competitors. Walking in an old growth grove feels almost park-like, with gaps of open forest between the monster trees. Sequoias also have thick bark that can handle those burns and keep on trucking.

But rising carbon dioxide has created a much different climate, one that favors explosive fires that can leap between the crowns of trees. Hotter temperatures have made things more flammable by drying out vegetation and locking in drought conditions. Poor forest management that prioritized fire suppression also means there’s more around to burn. When an errant spark or lightning strike hits, it can send entire forests up in flames.

Last year’s firestorm was particularly shocking since the state rarely sees widespread lightning in the summer dry season. The flames also attacked coastal redwoods, another ancient and striking species of tree only found in a few locations in California.

But with unprecedented becoming the norm, it’s unclear what the future will hold for these ancient trees adapted to a climate of the past. Thomas Swetnam, an emeritus tree ring researcher at the University of Arizona, said in an email at the time of the firestorm last year that, “Generally, coast redwoods and giant sequoias now occur in small, isolated groves. Very hot, large, high severity fires could kill many or all trees in some groves. In increasingly warm and dry climates we are not sure if they will regenerate.”

“The precise threshold of climate change (rising temperatures, increasing drought magnitude, etc.) that may cause large and frequent high severity fires burning over entire groves, and the inability of trees to recover, are not known for coast redwoods or giant sequoias,” he added. “The fact that we are seeing some mortality of 1,000-plus year old trees now in some groves is a warning though that we may be approaching these thresholds.”

It raises challenging questions for how we protect the remaining trees—and the even more somber prospect of letting them go. Most sequoias reside in national parks, be it Sequoia, Kings Canyon, or Yosemite. The National Park Service recently published new guidance on how the park planners should be getting ready for climate change, including embracing change as part of resource management. Ominously, the report also notes (emphasis ours): “The scope, pace, and magnitude of climate-related changes will continue to present new challenges for the National Park Service, with an accompanying reality that it will not be possible to safeguard all park resources, processes, assets, and values in their current form or context over the long term.”